Landstuhl tries to get ahead of brain injuries 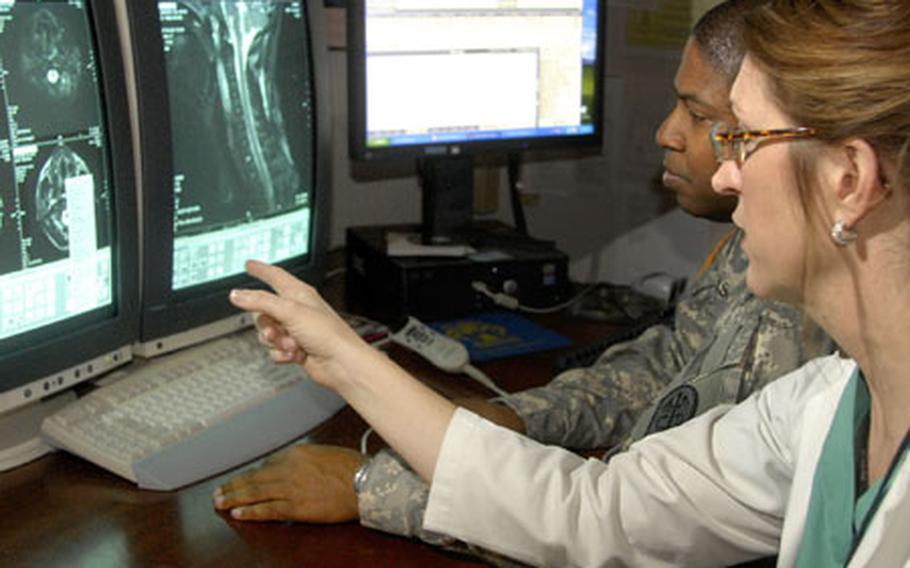 Army and Air Force volunteers help unload a bus carrying wounded just in from Iraq as it arrives at Landstuhl Regional Medical center on Nov. 16, 2006. Since May of last year, when Landstuhl began testing for traumatic brain injuries, the hospital has found that one in three of its war-related inpatients have some form of TBI. (Ben Bloker / S&S)

The hospital is the &#8220;chokepoint&#8221; in the military medical evacuation process. It is where all the wounded from Iraq and Afghanistan are ferried and treated before being sent to various hospitals around States.

All patients, including outpatients being treated at the center for relatively minor injuries, are asked if they&#8217;ve been exposed to blasts.

Since its TBI screening program began last May, Landstuhl has identified 33 percent of its war-related inpatients as having some form of TBI.

During their brief stay, the injured are given an oral exam for TBI known as the military acute concussion evaluation. Most of those flagged have mild TBI, which is synonymous with a concussion, Font said.

Early in the war in the midst of troops with obvious and severe wounds &#8212; missing limbs, puncture wounds and massive bleeding &#8212; those unscathed, yet still exposed to bomb blasts, went undiagnosed for TBI. As the insurgency began to rely heavily on improvised bombs, doctors turned their attention toward TBI.

In recent months, media outlets have begun calling TBI the signature injury of the war.

Traumatic brain injury is a blow or jolt to the head or a penetrating head injury that disrupts the function of the brain. Symptoms include headaches, dizziness and memory problems. Those symptoms can dissipate in hours or days, and nearly always get better in one to three months. Most people recover from a concussion within three months. If a servicemember has more than one concussion in a three-month span, the healing process can stop and problems can arise, Font said.

Those suffering from TBI also have difficulties with social relationships and interactions, said Dr. Alisa Gean, a neuroradiologist and TBI expert of 25 years who just completed a two-week visit to Landstuhl.

&#8220;There are these ill-defined emotional complaints that occur but otherwise physically they look like normal human beings,&#8221; she said.

Those with severe TBI have brain injuries visible on computer brain scans and obvious dysfunctions. Advanced imaging technology is not yet able to detect mild brain injuries, however, which is why the oral exams are given. Some patients arriving at Landstuhl already have been screened downrange for TBI.

In the oral exams, patients are told to remember five words, which they repeat three times. Then they go through a series of exercises that test orientation and concentration. After those exercises, the patients are asked if they can recall the initial five words.

&#8220;That tests short-term memory and longer-term memory after the brain has been tasked to do some things,&#8221; said Dr. Stephen Flaherty, and Army colonel and director of Landstuhl&#8217;s trauma program.

Troops identified with TBI can be treated through therapy available at some stateside centers. Medically, lesions visible on scans can reverse and improve over time, Gean said. From mild to severe TBI, the brain can adjust to injury, she said.

&#8220;The good news about these kids is they have young brains that are very capable of healing themselves,&#8221; Gean said.

&#8220;When I was in medical school, we used to think that once you injured your brain, it was a permanent injury. The good news is that the brain is extremely elastic. It&#8217;s very malleable. It can adapt to being wounded so that it can heal itself.&#8221;

How do they test for TBI?

Here is a test based off a portion of the military acute concussion evaluation &#8212; known as MACE &#8212; used to screen for TBI. The test has a possible 30 points. Patients without concussions average a score of 28. Scores below 25 indicate a test taker may have TBI.

Traumatic brain injury is a blow or jolt to the head or a penetrating head injury that disrupts the function of the brain. Not all blows or jolts to the head result in TBI.

Severity ranges from mild (a brief change in mental status or consciousness) to severe (an extended period of unconsciousness or amnesia). Mild TBI is basically the same as a concussion.

TBI can result in short- or long-term problems with independent function.

Blasts are a leading cause of TBI for active-duty military in war zones. Other causes are bullets, shrapnel, falls, vehicle crashes and assaults.

Males are about 1.5 times as likely as females to sustain TBI. The incidents of TBI are far greater than incidents of HIV and breast cancer combined, according to Dr. Alisa Gean, a neuroradiologist and TBI expert who just completed a two-week visit to Landstuhl.