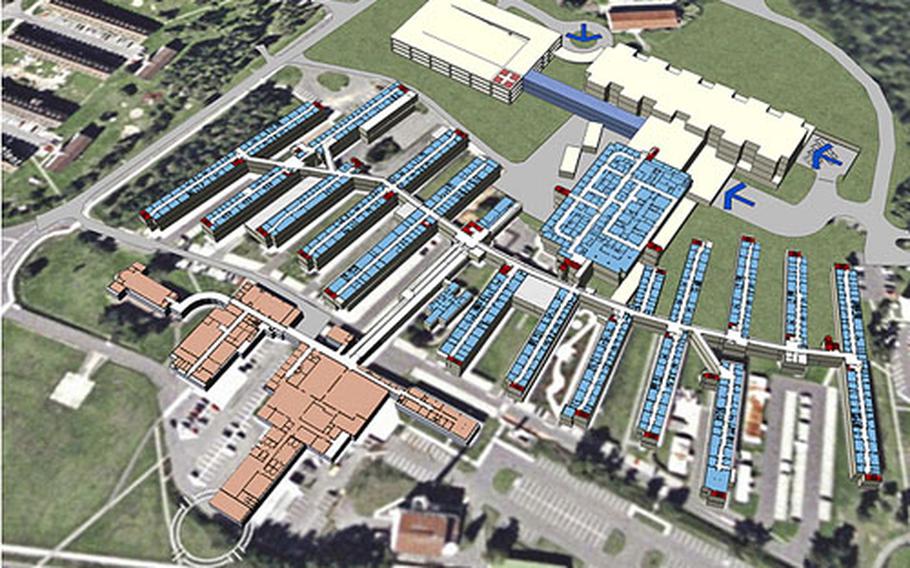 Pictured: Graphic of where the new inpatient tower at Landstuhl will be situated in relation to the rest of the hospital. Construction on the $405 million project is scheduled to begin in fiscal 2011 and wrap up in fiscal 2014. (Courtesy of Landstuhl Regional Medical Center)

LANDSTUHL, Germany &#8212; The largest American hospital outside the United States is set for a $405 million upgrade.

Set for completion in 2014, a five-story tower would house inpatients at Landstuhl Regional Medical Center.

"There was a concerted commitment by a lot of people to make sure that Landstuhl and the Europe Regional Medical Command are positioned to take care of, not only the causalities, but also our moms and dads, soldiers and their families and the kids from throughout the European theater," he said.

Other projects on the list released by Tricare Management Activity included the construction of a $36.4 million consolidated health and dental clinic in Katterbach, Germany.

The construction would start in fiscal 2011 and take about two to three years, said Maj. Bryan Walrath, chief of health facility planning with ERMC.

Another project that will still have to compete for funding in the future is an estimated $34.3 million Vilseck consolidated health and dental clinic addition/alteration, Walrath said.

The Landstuhl tower has been a long time coming.

Constructing a tower at the hospital has been talked about for at least 20 years. U.S. troops wounded in Iraq and Afghanistan receive treatment at Landstuhl before flying back to military hospitals in the States. Since 2001, Landstuhl has treated more than 50,000 patients from Iraq and Afghanistan.

The Landstuhl project is the first of two proposed phases that would entirely replace the 1950s-era, spine-and-rib-configured hospital with modern towers.

The second phase, which will be formally proposed at a later date, calls for an outpatient tower opposite the inpatient tower. The two towers would be linked by the 1980s era building that holds the hospital&#8217;s ICU, emergency room and operating rooms.

The Phase I project at Landstuhl is estimated to cost $405 million and includes:

The roughly 278,000 square-foot, inpatient tower with about 120 beds.A five-story, 800-space parking structure with helipad on top.A connector between the parking garage and tower.Renovations to the building that houses the hospital&#8217;s ICU, operating rooms and emergency room.Rerouting an on-post road.Demolishing four buildings.Just a few miles from where the new tower will be built at Landstuhl is Ramstein Air Base&#8217;s chronically delayed Kaiserslautern Military Community Center project. The ongoing construction of the multimillion-dollar mall and hotel complex has been a disaster, with Air Force officials testifying to a congressional committee twice on project woes. Landstuhl undoubtedly will look to avoid the same pitfalls.

"Now that [the inpatient tower has] been approved and they start bringing people on site, we&#8217;ll be able to talk with Germans and ensure that we&#8217;ve got proper oversight and proper coordination for the construction of the facility," Lein said.