Landstuhl takes it up a level 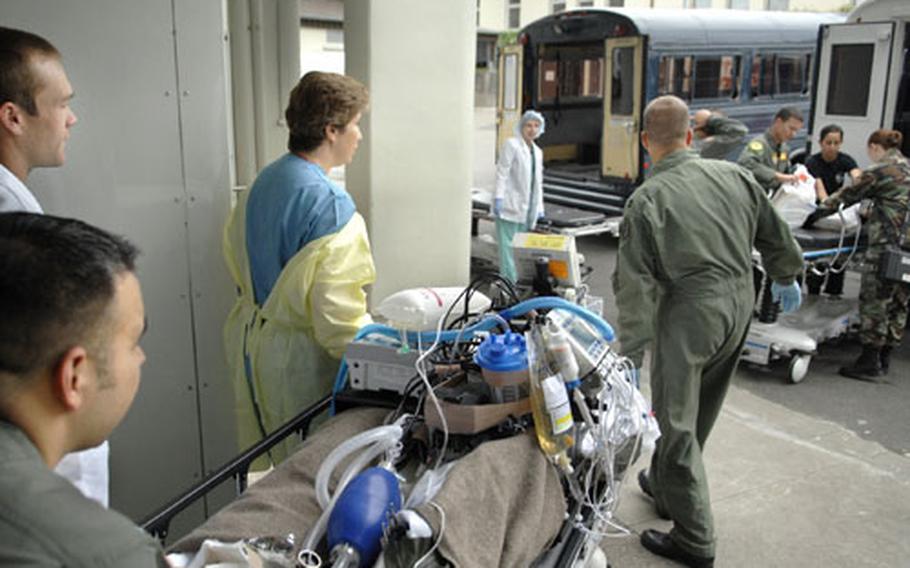 Army Capt. Karla Clarke, center, an ICU nurse at Landstuhl Regional Medical Center, assists in transporting her patient to a bus for air transport Aug. 21st, 2007. LRMC has become the only hospital outside the U.S. designated as a Level II trauma center. With the new designation come tougher standards in everything from tracking patients to receiving patients and documenting medical care. (Ben Bloker / S&S)

During the process to acquire the verification from the American College of Surgeons, Landstuhl has added a neurosurgeon to its staff and a dialysis machine.

Landstuhl officials, along with a representative from the surgical association, gathered Wednesday to celebrate the verification, which means the hospital now has tougher standards for everything from tracking patients to medical records.

&#8220;It sends a message home to the mothers, wives and families of our combat casualties that the care at Landstuhl is excellent,&#8221; Flaherty said.

Landstuhl is the only hospital outside the U.S. &#8212; though not the only military hospital &#8212; to receive the trauma center designation, meeting 215 benchmarks set by the Chicago-based surgical association.

&#8220;What struck me most was the passion everyone has for caring for injured soldiers,&#8221; said Dr. Frank &#8220;Tres&#8221; Mitchell, a Kansas City surgeon who reviewed Landstuhl for the association.

The hospital&#8217;s ability to coordinate the transportation and stages of care that wounded soldiers receive &#8212; from the battlefield to the combat hospitals downrange and then to Landstuhl before being flown to U.S. medical facilities &#8212; also impressed Mitchell.

Though most patients from Iraq and Afghanistan treated at Landstuhl suffer nonbattle injuries, an average of 75 soldiers per month have been admitted to the intensive care unit since April, hospital commander Col. Brian Lein said.

About 70 percent of those casualties are from roadside bombs, he said.