Landstuhl students rock their own vote 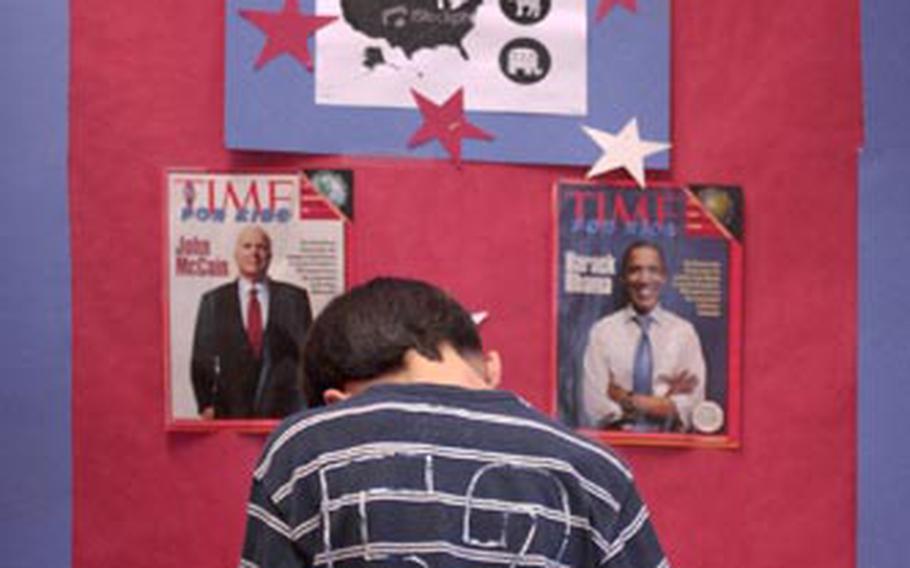 Fifth-grader Morgan Rogers casts his vote. As a learning tool for the electoral process, students pretending to be the presidential candidates gave speeches during two assemblies at the combined elementary and middle school and students then voted back in their classrooms. (Ben Bloker / S&S) 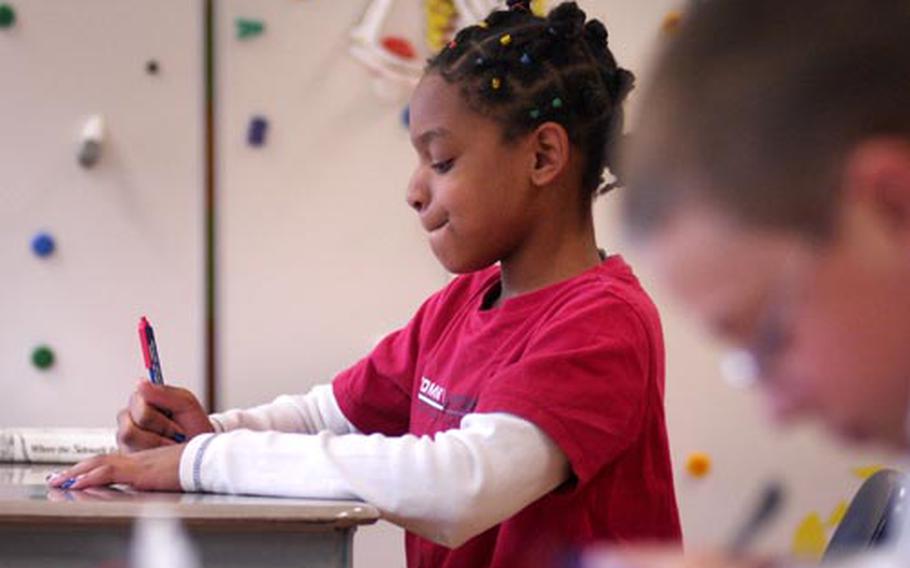 At least that&#8217;s how the votes shook out in one Department of Defense Dependents Schools-Europe classroom.

"I think McCain is a good leader from his time in a POW camp and is good at getting out of tight situations," said Colin. "I also don&#8217;t think that Obama is good at making decisions because his vote in the Senate was &#8216;present&#8217; most of the time."

The roughly 700 students at the Landstuhl school were set to vote in Tuesday&#8217;s mock election &#8212; the results of which are to be announced Wednesday.

But before the students voted, they heard from the candidates.

"This election is probably the most historical our country&#8217;s ever had, and I think that someday you will sit back and think of where you were when this campaign took place," said Jerry Pink, a social studies teacher and coordinator for the event.

"My wife is not only beautiful, but she is a born leader," John said. "She has been on the city council and served as mayor before becoming governor."

Brian Cavanaugh, 12, outlined McCain&#8217;s stance on the issues when he addressed the assembly as the GOP presidential candidate. Brian took the microphone while the kids shouted "John" repeatedly.

"I will have a plan to make the United States more energy-efficient," he said. "I believe that Iraq needs us, so I say we stay until we have a proper government [in place]."

When Christian Barfield, 11, stood at the podium, he was greeted by chants of "Obama."

"You will be taking part in an important and historical election," Christian said. "As the first person of color to serve as president, I will be president to all people."

But even the student who played Sarah Palin thinks the Democratic ticket will win. Sounding more like a TV political pundit than a sixth-grader, Kristi Carrigan offered her prediction.

"I know the Bradley effect with the polls might happen, but I still think Obama&#8217;s going to win," she said, referring to the discrepancy between whom voters say they vote for as opposed to whom they really vote for when a minority candidate is on the ballot.

"I think he did a really good job the past 21 months."