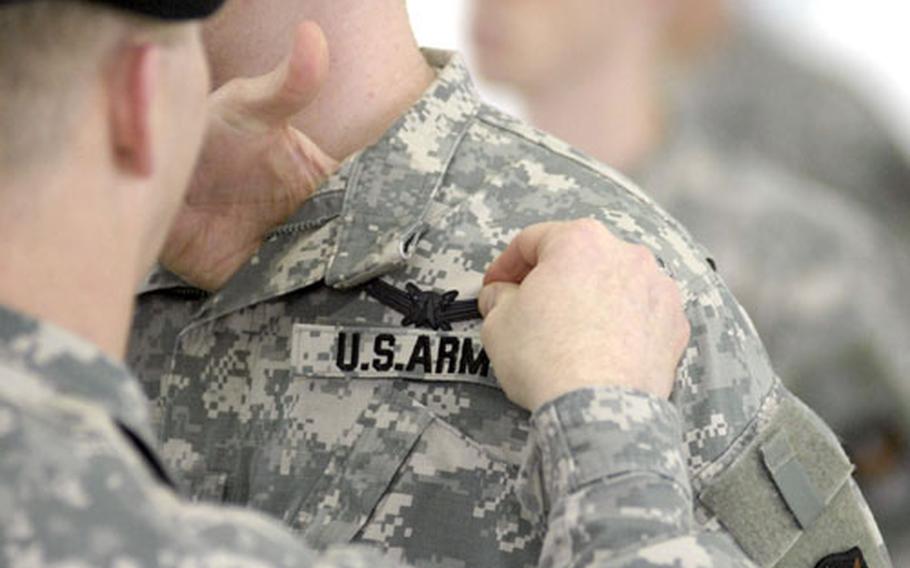 LANDSTUHL, Germany &#8212; A relatively new badge will probably elicit more than a few double takes and questions after 29 soldiers with a satellite communications unit were awarded the Air Force Space Badge at a ceremony Thursday.

The soldiers with Company C, 53rd Signal Battalion are now part of just 489 soldiers who can wear the Air Force badge since it was authorized for the Army in August 2006.

The futuristic-looking badge, subdued in black for wear on the Army Combat Uniform, was pinned on 26 soldiers with the company. Three other Company C soldiers earned the space badge but were unable to attend Thursday&#8217;s ceremony. The roughly 60-soldier unit is responsible for satellite communications and operates on a small post that&#8217;s home to several massive, white satellite dishes near Landstuhl Regional Medical Center.

To become eligible for the basic badge, soldiers had to complete a stand-alone course such as the satellite systems/network coordinators course and serve at least 12 months in an Army space cadre position. The 53rd Signal Battalion is one of the designated space units in the Army.

Those presented with the badge Thursday ranged in rank from private first class to staff sergeant.

Every day, lives depend on the work of the soldiers with Company C, 53rd Signal Battalion, Geiger said.

The person who recruited Pfc. Donald Boyd to become an Army satellite communication systems operator-maintainer had the now-retired Air Force Space and Missile Badge. Boyd said he thought it was cool but later learned that the specific badge had been retired. When soldiers became eligible for the relatively new Air Force Space Badge, unit leaders found out the badge&#8217;s standards and submitted paperwork for those eligible.

Stories from how soldiers explained the previous badge to others could carry over to the new badge, said Sgt. Jonathan Maxwell, one of the badge recipients Thursday.

The following Company C soldiers earned badges but were not present Thursday: