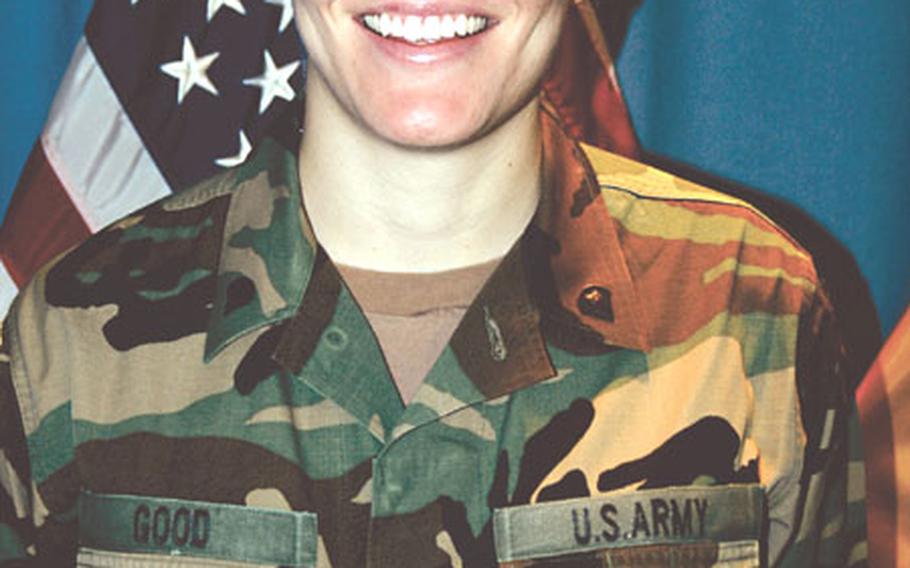 LANDSTUHL, Germany &#8212; A Landstuhl Regional Medical Center health care technician has been named the Army Medical Command&#8217;s Soldier of the Year for 2004.

Spc. Gurusahai Good, 23, got the nod at a May 20 banquet at Fort Sam Houston, Texas. Good rose above nine other soldiers nominated for the honor. The medical command has about 27,000 soldiers.

Good, who spends her days taking patients&#8217; vital signs and assisting nurses, trained in physical fitness and Army knowledge for six months before she won. She consistently scores a perfect 300 score on her physical fitness tests. The Denver native also was the only female soldier to finish a six-mile &#8220;ruck march,&#8221; at Fort Sam, which is part of the Soldier of the Year competition.

Good said she was especially honored to get the award because ics in Iraq who are enduring greater challenges.

&#8220;I feel like I&#8217;m representing the best soldiers in the medical command. It is humbling to be chosen because there are soldiers doing real live stuff &#8212; not just simulated,&#8221; Good said Thursday.

Good&#8217;s &#8220;battle buddy,&#8221; Staff Sgt. Deanna Swords, trained with her the entire time. Swords was the European Regional Medical Command&#8217;s Non-Commissioned Officer of the Year. She represented the command at the competition in Texas.

Good next will compete for the top spot among all Army major command soldiers. They will be selected in September.

Crump is confident that Good will prevail.