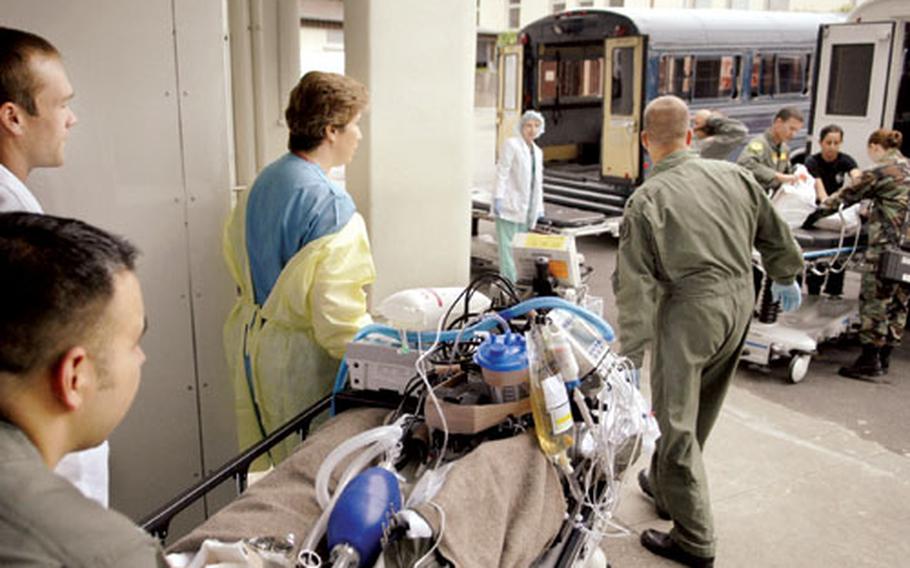 Army Capt. Karla Clarke, center, an ICU nurse at Landstuhl Regional Medical Center, assists in transporting her patient to a bus for air transport Aug. 21st, 2007. LRMC has become the only hospital outside the U.S. designated as a Level II trauma center. With the new designation come tougher standards in everything from tracking patients to receiving patients and documenting medical care. (Ben Bloker / S&S)

LANDSTUHL, Germany &#8212; Landstuhl Regional Medical Center has seen a nearly 45 percent drop in the number of inpatients &#8212; mostly wounded troops &#8212; from wars in Iraq and Afghanistan in the last six months.

The downturn in inpatients at the hospital since May bucks a trend that in years past saw increases in inpatient numbers from May until the latter months of the year, followed by a regular drop-off in winter months.

So can the decline in war-related inpatients &#8212; a category typically used to measure severity of injury &#8212; be attributed to the improved situation in Iraq?

&#8220;The only thing that doesn&#8217;t let us say that wholeheartedly is because of the normal drop-off that occurs in the winter. ... What will be interesting is as we get into the rest of January, February and March is to see if that trend continues.&#8221;

Even anecdotally, Landstuhl officials said the number of battle-injured patients at the hospital has declined in recent months.

Landstuhl&#8217;s 146 inpatients from operations Iraqi and Enduring Freedom in December is the lowest war-related inpatient total of any month since December 2003.

The number of inpatients treated at Landstuhl from Afghanistan numbered 455 in 2007, less than one-sixth the number from Iraq during the same period.

&#8220;However there was a time in the fall, since I have been here, that there were significant injuries coming out of Afghanistan because of special operating forces there and especially in our coalition forces,&#8221; Lopez said.

&#8220;The Canadians have really been helping in Afghanistan, and we had several significant battle injuries from that coalition force that we were managing for the last quarter of 2007.&#8221;