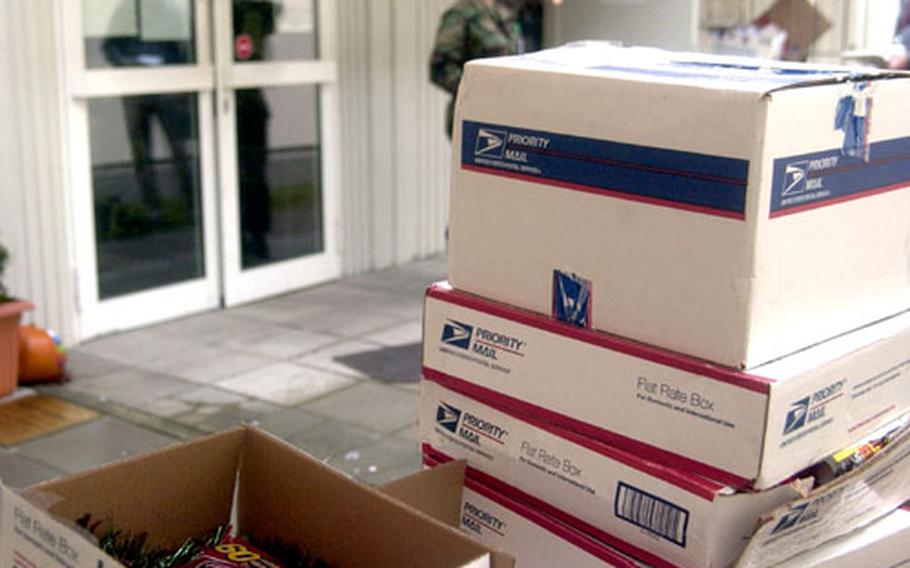 And all the donations &#8212; from individuals and charitable organizations to massive corporations &#8212; are available free to the war wounded recovering at Landstuhl. The center has more than 3,000 donors in its database.

Right now, the center is receiving around 120 boxes of donations each day, Griffith said. In slow times, the center might receive 30 to 40 boxes a day.

&#8220;This particular time of year, we try to move them out as fast as we can because of the fire hazard and (hospital) standards,&#8221; Griffith said.

Last year, the center got so many holiday donations that boxes were lined along a hallway and the stacks reached about 5 feet high.

Often, wounded troops from Iraq and Afghanistan arrive at Landstuhl with very few &#8212; if any &#8212; of their hygiene items, extra clothes, etc. The chaplains&#8217; closet outfits the wounded with pretty much everything and anything they could need during the few days they receive treatment at Landstuhl.

Apart from the necessities, the center receives homemade donations of quilts, Christmas cards, cookies and the like. The wounded, who can make it to the center, can peruse the shelves themselves. For those unable to make it out of hospital beds, liaisons often pick up items for their wounded, and a cart filled with donations is wheeled around on the wards.

The center began in October 2001 as the chaplains&#8217; closet because it literally was a small closet. Today, the center occupies a building adjacent to the hospital. Since October 2001, people have donated about $2.3 million worth of goods or money. Phone cards are a popular item, with the center giving out between 1,200 and 1,400 phone cards a month.

When the center gets overwhelmed with donations, it will ship goods to units serving downrange.

Even with the large amount of free stuff available to the wounded at Landstuhl, most are hesitant to take more than a few items.