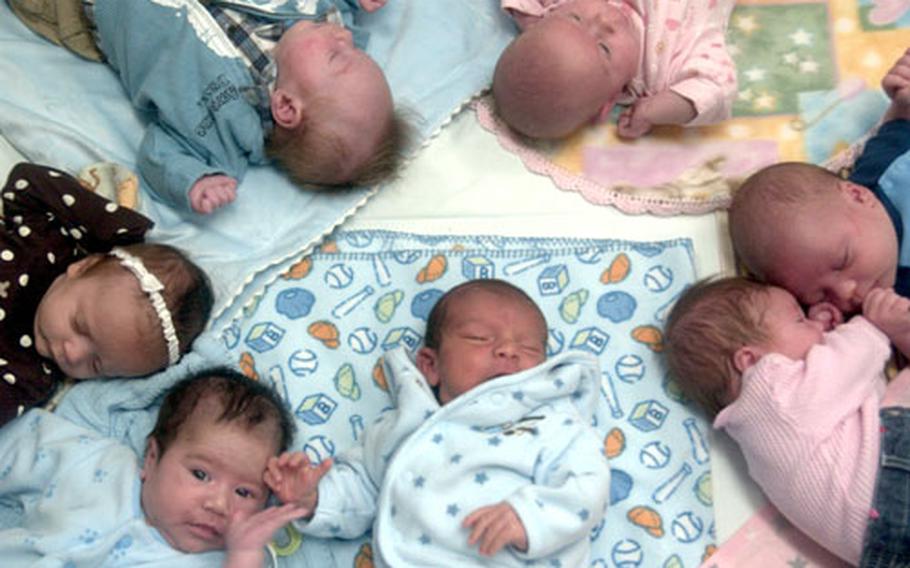 Babies ranging from two to six weeks old get acquainted (or just sleep) as their parents take part in a CenteringPregnancy meeting at Landstuhl Regional Medical Center. (Steve Mraz / S&S)

Babies ranging from two to six weeks old get acquainted (or just sleep) as their parents take part in a CenteringPregnancy meeting at Landstuhl Regional Medical Center. (Steve Mraz / S&S) 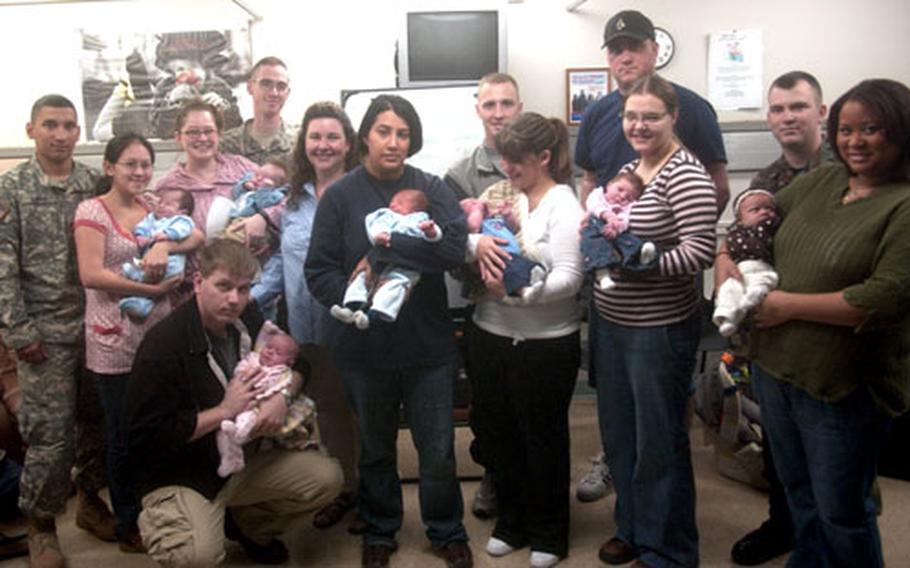 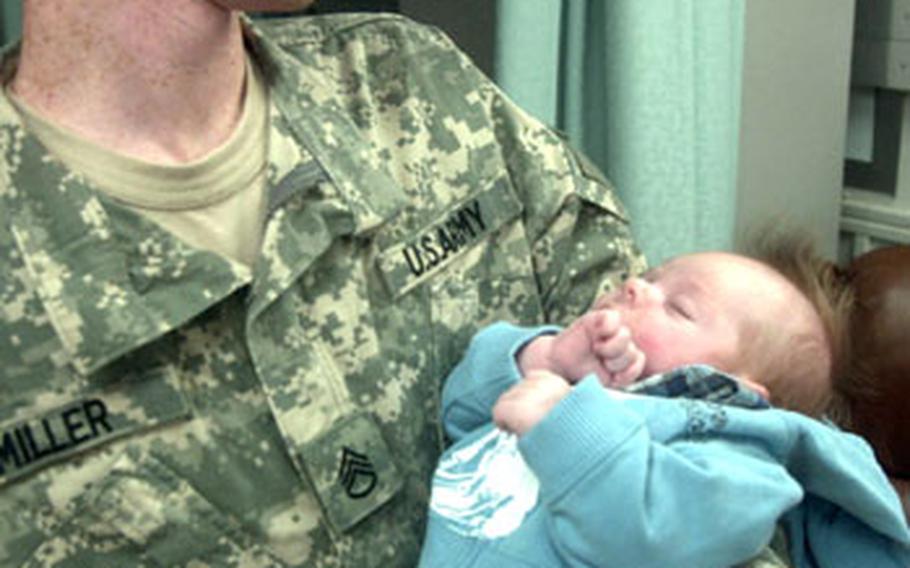 But their moms and dads were old friends by that time.

The parents were in the first graduating class of CenteringPregnancy, a program at Landstuhl that takes a group approach to prenatal care.

Instead of going to individual prenatal appointments, the soon-to-be moms and dads participated in group sessions, roughly one a month.

When the program started in March, the expectant moms and dads didn&#8217;t know each other. They were in Germany, far from home without moms, sisters, aunts, etc. to give advice. Now they&#8217;ve gone through all the highs and lows, questions and answers of pregnancy together.

Six of the seven couples in the group were having their first baby.

Couples receiving prenatal care at Landstuhl can take part in CenteringPregnancy at the 12-week pregnancy mark. The groups, composed of 10 to 12 women and their partners, meet about once a month until later in the pregnancy when the visits become more frequent.

During the 90-minute sessions, each woman gets one-on-one care, and experts in different areas &#8212; such as massage, lactation, postpartum, etc. &#8212; give presentations. After the women give birth, the moms and dads reunite at a follow-up session.

&#8220;I think the patients really enjoyed it,&#8221; said Air Force Lt. Col. Mary Claire Wahl, a certified nurse midwife who led the group. &#8220;I had a really good time getting to know all of them. I got more time with every patient as opposed to the 15-minute visits once a month. We had hours and hours together.&#8221;

Army Sgt. Justin Lopez and his wife Jessica had individual appointments during the prenatal care of their first child, but the couple said they learned more this time around with CenteringPregnancy.

Currently, seven other groups of pregnant women and partners are taking advantage of the program, which is led by Wahl and fellow certified nurse midwife Air Force Lt. Col. Brenda Owen.

The program was developed in the United States 13 years ago and used in civilian hospitals. Two military hospitals in the States have adopted the program.

Landstuhl is the first overseas military hospital to follow suit. For more information on its CenteringPregnancy program, call DSN: 486-8124.

Vitamins are essential for moms-to-be

Pregnant women should be sure to get enough folic acid to avoid birth defects, according to a certified nurse midwife at Landstuhl Regional Medical Center.

Landstuhl is seeing a spike in the number of baby births in recent months. Normally, the hospital records about 70 to 80 births a month, but in the past three months, it has delivered more than 100 each month.

Taking folic acid, a B vitamin, before and in the early part of pregnancy can help prevent some defects of the brain and spinal cord, Lt. Col. Brenda Owen wrote in the Kaiserslautern American base newspaper.

&#8220;Because these defects happen in the first month of pregnancy, before many women even know they are pregnant, it is important for a woman to have enough folic acid in her system before conception,&#8221; she writes. &#8220;Because about half of all pregnancies in American women are unplanned, it is recommended that women who can become pregnant (even if they are not planning to get pregnant) take a vitamin with folic acid daily.&#8221;

&#8220;It is recommended that all women who can become pregnant take a multivitamin containing 400 micrograms of folic acid every day starting before pregnancy,&#8221; Owens wrote. &#8220;Eating a healthy diet including foods that are high in folate and those fortified with folic acid is also important.&#8221;