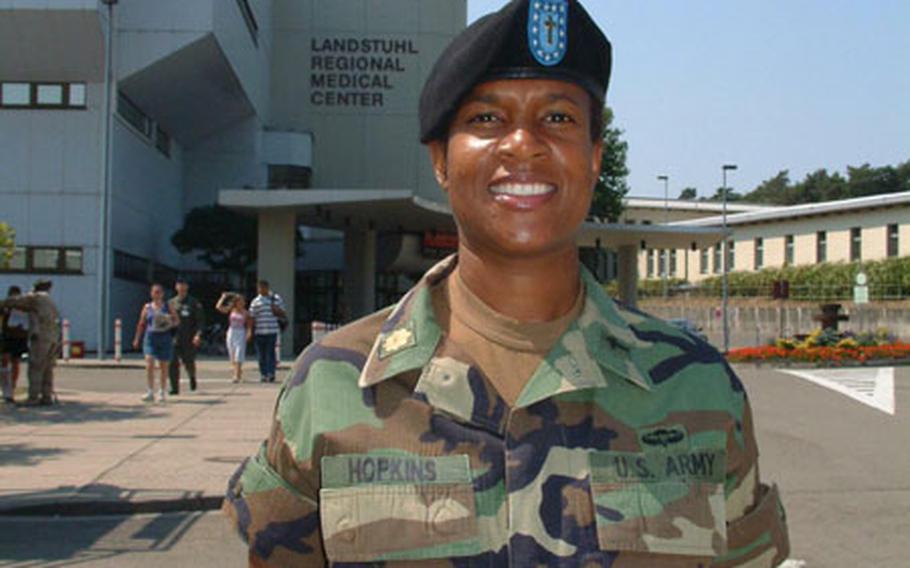 Reserve Chaplain (Maj.) Felicia Hopkins of El Paso, Texas, was recently recognized as El Paso Times Woman of the Year. She is currently working as a staff chaplain at the Army&#39;s Landstuhl Regional Medical Center in Germany. (Courtesy of U.S. Army)

Until recently, Army Reserve Chaplain (Maj.) Felicia Hopkins was unaware of the impact her work had on others.

Hopkins, of El Paso, Texas, has been deployed since March and is currently serving as a staff chaplain at the Army&#8217;s Landstuhl Regional Medical Center in Germany. She was recognized in August as the El Paso Times Woman of the Year. The Times is the local daily newspaper.

Soon after hearing of the honor, she flew home to receive the award.

The award recognizes someone who excels as an executive, teacher, volunteer, mother and daughter. Hopkins was chosen by a committee of business leaders, city government officials and El Paso citizens.

Her family, church members, individuals at the University of Texas at El Paso and William Beaumont Army Medical Center in El Paso felt the same way.

&#8220;People from all walks of my life nominated me,&#8221; said Hopkins, who served at the Beaumont center last year during Operation Noble Eagle, the U.S. military&#8217;s homeland defense initiative.

In addition to being a major in the Army Reserve, Hopkins is a former teacher at the University of Texas at El Paso, an associate pastor at St. Mark&#8217;s United Methodist Church, a wife and the mother of two boys.

After enlisting in the Army, she attended Officer Candidate School and served on active duty as an officer for several years. She left the military to join the corporate work force, a job that would later be interrupted by a diagnosis of uterine cancer.

The diagnosis helped her come to grips with her purpose in the world and her place in it.

&#8220;When I was recovering, I decided I should do something meaningful with my life,&#8221; Hopkins said.

She returned to church, started volunteering and later felt called to the ministry.

Unless her orders are extended, Hopkins is scheduled to stay at Landstuhl until March.