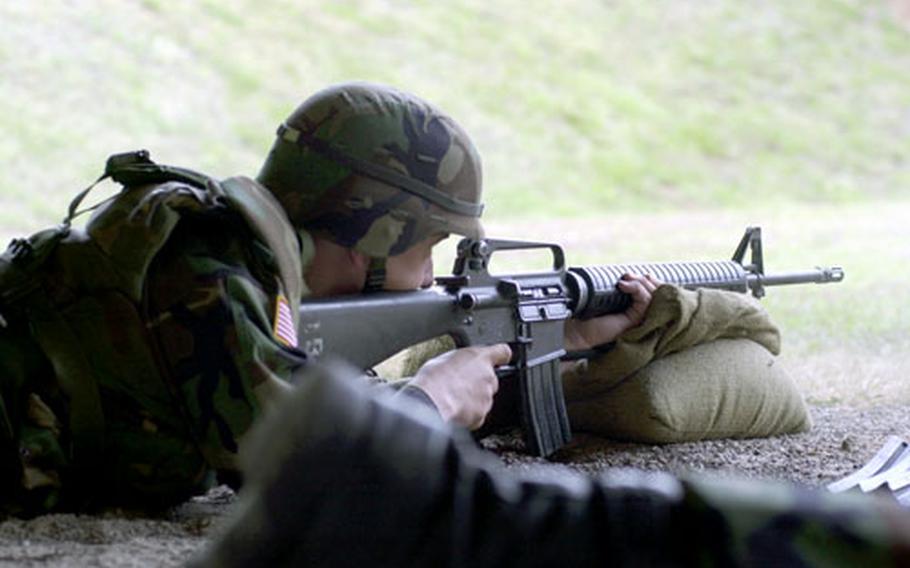 A soldier with the 5th Maintenance Company fires at a target last week at the Breintenwald 300-meter range in Landstuhl, Germany. (Steve Mraz / S&S)

A soldier with the 5th Maintenance Company fires at a target last week at the Breintenwald 300-meter range in Landstuhl, Germany. (Steve Mraz / S&S) Soldiers with the 5th Maintenance Company fire at targets last week at the Breitenwald 300-meter range, which recently reopened for use after four years. (Steve Mraz / S&S)

Thursday was the first time the 5th Maintenance Company used the facility&#8217;s 300-meter range since it reopened last month.

Trying to hit a target from 300 meters, which is roughly 984 feet, requires a high degree of concentration, said Capt. Joe Grande, company commander.

The nine baffles had deteriorated because of weather during the range&#8217;s 50-year existence. The baffles, which prevent stray shots from sailing over the range, resemble a series of enormous hurdles.

Now repaired, the elevated, wood-covered baffles are no longer a safety concern and the 300- meter range is open for business.

Instead of going to Grafenw&#246;hr or Baumholder, Kaiserslautern units now only have to travel to the Breitenwald range near Landstuhl Regional Medical Center for a chance to set their sights on targets 300 meters away. In accordance with U.S. Army, Europe regulation 350-1, soldiers are required to qualify twice a year on a 300-meter range.

The range and what it will do for the soldiers in his unit impressed 1st Sgt. Anthony Bargaineer with the 5th Maintenance Company.