Landstuhl mortuary is funeral home for those killed in Mideast war 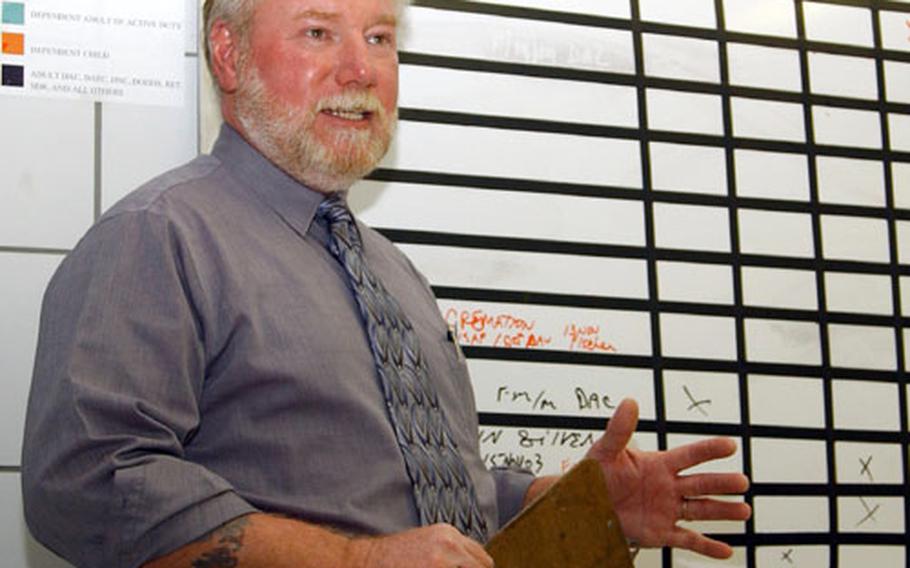 Mark Baldwin, deputy director at the U.S. Army Memorial Affairs Activity-Europe, explains how remains en route and in the mortuary are tracked on the board behind him. The facility is the military funeral home in Europe for servicemembers and coalition force troops, Department of Defense civilians and dependents. (Lisa Horn / S&S)

LANDSTUHL, Germany &#8212; A dry white board at the U.S. Army Memorial Affairs Activity-Europe lists the names of each servicemember whose remains are in the unit&#8217;s mortuary at any given time.

Lately, the board has been filled.

With at least 75 servicemembers killed in November, last month was the deadliest for U.S. troops since the invasion of Iraq.

Between Oct. 5 and Nov. 12, the unit deposed of 54 remains, 23 of which included servicemembers involved in Operation Enduring Freedom and Operation Iraqi Freedom. The other 31 were DOD civilians, dependents or servicemembers who died in places other than the Middle East.

In operation since 1951, the mortuary is part of the 21st Theater Support Command at Landstuhl Regional Medical Center in Landstuhl, Germany.

It serves as the funeral home for U.S. servicemembers and coalition forces, Department of Defense civilians, dependents and other Americans assigned or deployed with the U.S. European Command and the U.S Central Command.

In late October, the Europe mortuary had to cover for the Dover Port Mortuary, in Dover, Del., where remains of servicemembers from stateside units are normally sent. The U.S. mortuary was closed as it moved to a new location.

Before a servicemember&#8217;s remains are returned to the States, several things must take place.

First, when a servicemember has been killed in a place such as Iraq, the remains are taken from the scene to a field collection point. From there, the remains are transported to the theater mortuary evacuation point, where a flight is arranged to fly the body to Landstuhl.

The process to get a body out of the field can take as long as three days, Baldwin said.

Upon arrival at the mortuary, a servicemember&#8217;s remains are put on medical hold, awaiting autopsy and positive identification.

Once Ingwersen has released the body, Sgt. Fitzgerald Morris is charged with making the servicemember look presentable, per instructions from the next of kin.

Every body is embalmed, dressed and placed in a casket, with shipping arrangements and documents complete within 24 hours of being released to the mortuary, Baldwin said.

In a typical case in which a death investigation is not necessary, the body of a killed servicemember can take an average of five days to return back to U.S. soil.

When the body arrives stateside, the family&#8217;s selected funeral home then takes possession.