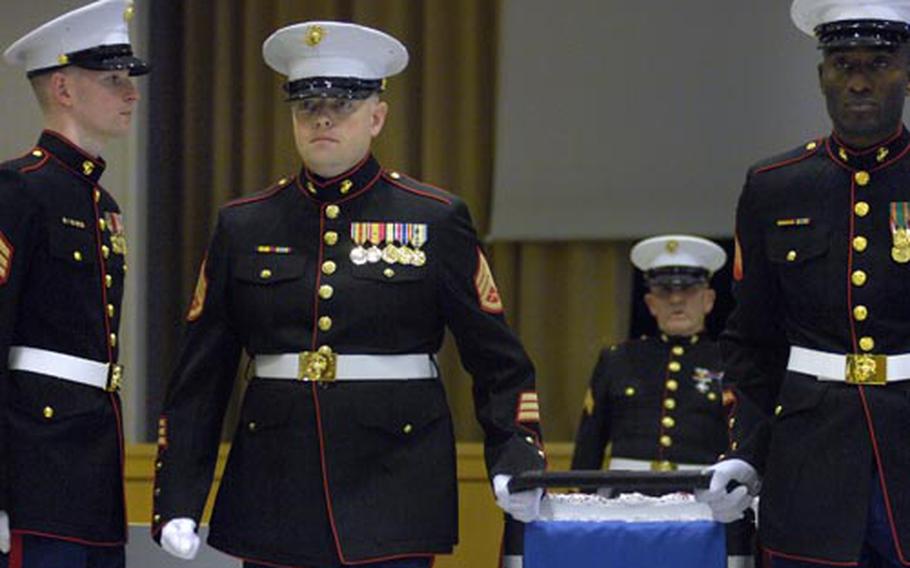 Staff Sgt. Ben Coleman, left, and Sgt. Recordo Demetrius march the Marine Corps cake down the aisle at the conclusion of a ceremony commemorating the 233rd birthday for the Corps Friday at Landstuhl. (Ben Bloker / S&S)

A full crowd at Landstuhl&#8217;s Heaton Auditorium watched as the Marines paid tribute to their heritage with cake, a video from the Marine Corps commandant and a guest speech.

Before taking the first bite of cake, Goodwin, who has volunteered with the Marine liaison team at Landstuhl, gave a speech.

"I&#8217;ve been here now for over four years working for them and working with the people in the hospital, and I feel it&#8217;s a great privilege," he said. "To all the Marines, Air Force, Army and Navy, I want to tell you God bless, good luck and Semper Fi."

At 21, Lance Cpl. Johnathon Neumann was the youngest Marine on hand. Neumann, who was serving in Iraq, is an outpatient at Landstuhl. He&#8217;s one of nine Marines getting treatment at Landstuhl.

"(The Marine Corps birthday) represents what we are in a way," he said. "It represents our heritage, our honor."

This year&#8217;s video birthday message from Gen. James Conway, Marine Corps commandant, and USMC Sgt. Maj. Carlton Kent was a somber reminder of the challenges Marines face against terrorists. It began with a 25-year retrospective on the October 1983 bombing of a Marine barracks in Beirut, Lebanon. The seven-minute video then touched on attacks against American troops and civilians such as the 1996 Khobar Towers bombing in Saudi Arabia, the 2000 U.S.S. Cole bombing in Yemen and the Sept. 11 attacks.

"Standing between our great nation and its ruthless enemy are young Americans with courage and conviction &#8212; United States Marines," Conway said in the video. "We are accustomed to rough terrain and even tougher conditions. We have learned to live hard and fight well."

The video closed with a messaged to Marine families, following a militarywide trend of recognizing families strained by constant deployments.

After the formal ceremony ended, the crowd dug into the Marine cake and sipped punch.

The Marine Corps birthday is Monday.