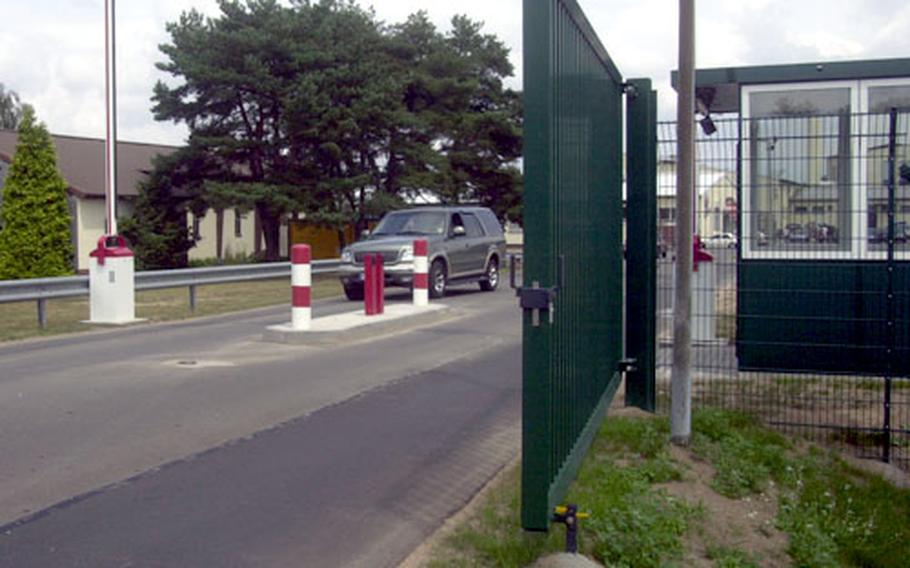 Beginning July 15, access to Landstuhl Regional Medical Center in Germany will be controlled by guards positioned at nine gates around an interior fence surrounding the hospital. (Steve Mraz / S&S)

In addition to the normal identification card check upon entering the Army installation at Landstuhl, those trying to access the hospital will have their ID cards examined a second time at a new fence that surrounds the hospital. The change goes into effect July 15 at 6 a.m.

&#8220;The main purpose is to control the flow of access going into the hospital only to those personnel who have a need to be in the hospital,&#8221; said Master Sgt. Michael Taylor, noncommissioned officer in charge of security at Landstuhl Regional Medical Center.

The green, metal fence is part of an increased force protection initiative at Landstuhl begun last summer in response to concerns about last year&#8217;s terror bombings in London. Other force protection measures at Landstuhl discussed last summer included bomb-sniffing dogs at entry gates, more guards patrolling inside the hospital, additional foot patrols along the perimeter, fence-line cameras and lighting around the installation.

As part of the heightened security, access into the sprawling, multiwing hospital was reduced last August from about 100 doors to eight doors. Since then, ID cards have been checked at those eight doors around the hospital.

Hospital officials want people to exercise patience during the transition and factor delays into their schedules.

&#8220;People just have to be patient,&#8221; said Paul Fevold, Landstuhl Regional Medical Center security manager. &#8220;They have to understand that this is a force protection initiative to make it safer for patrons of the hospital. Whether they be patrons or staff, everyone has to have patience.&#8221;

The interior fence allows access into and out of the hospital to be controlled without hampering any of the other operations on the installation, such as the gas station or child-care facility.

The hospital &#8220;can be locked down without affecting anything else on the installation,&#8221; Fevold said. &#8220;We can stop ingress and egress, or we can continue to egress without letting anything else come in. The fence does add an element of security for the hospital.&#8221;

Landstuhl has treated more than 25,000 troops in support of Operations Enduring Freedom and Iraqi Freedom and, as a result, has become well-known around the world. The hospital also provides general and specialized medical care for thousands of U.S. troops and their family members stationed in Europe. Landstuhl Regional Medical Center is the largest U.S. military hospital outside the U.S.