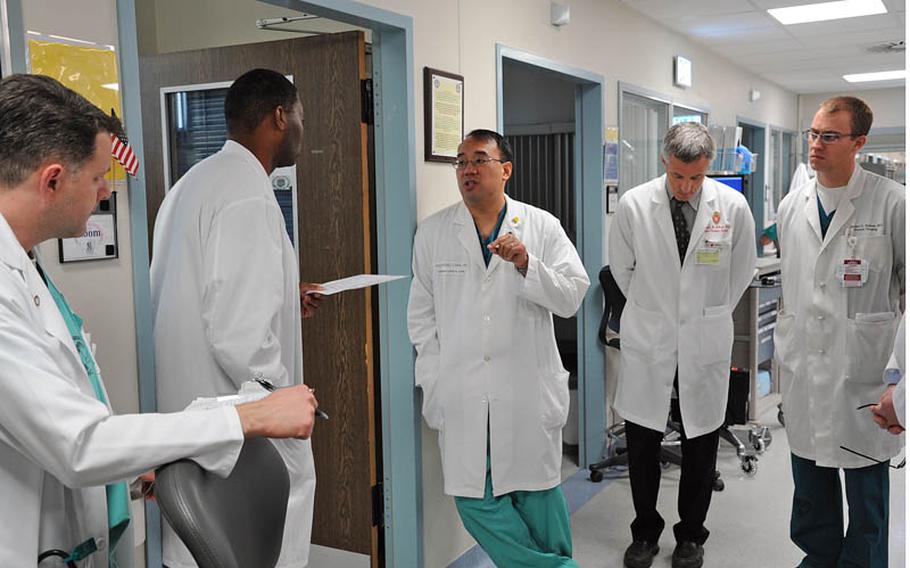 Buy Photo
Dr. (Lt. Col.) Raymond Fang, center, talks to Dr. (Capt.) Derric Whiteside, second from left, about a patient&#39;s condition during the morning rounds in the intensive care unit at Landstuhl Regional Medical Center on May 20. Fang is leaving the LRMC after seven years. (Michael Abrams/Stars and Stripes)

Buy Photo
Dr. (Lt. Col.) Raymond Fang, center, talks to Dr. (Capt.) Derric Whiteside, second from left, about a patient&#39;s condition during the morning rounds in the intensive care unit at Landstuhl Regional Medical Center on May 20. Fang is leaving the LRMC after seven years. (Michael Abrams/Stars and Stripes) 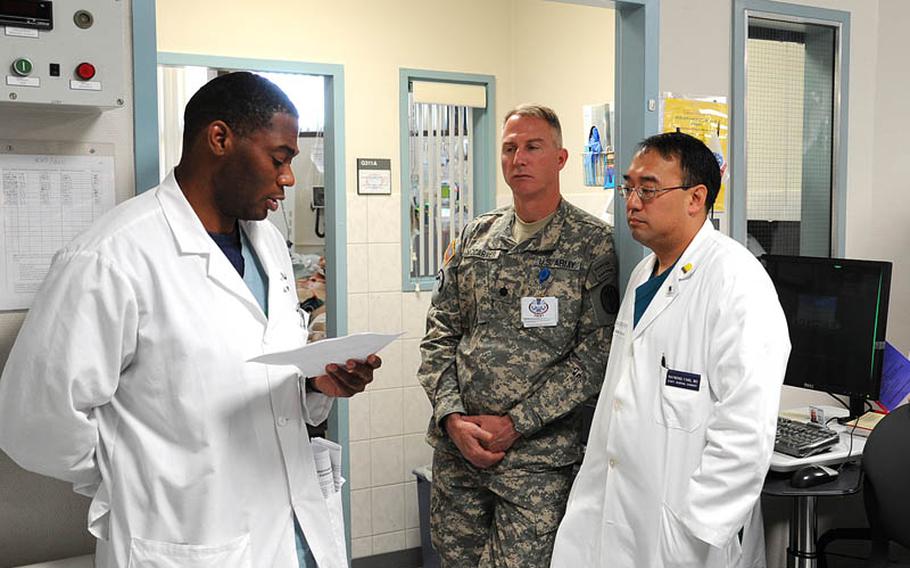 Buy Photo
Dr. (Lt. Col.) Raymond Fang, right, listens as Dr. (Capt.) Derric Whiteside, left, talks about a patient&#39;s condition during the morning rounds in the intensive care unit at Landstuhl Regional Medical Center on May 20. Fang is leaving the LRMC after seven years. At center is Army Dr. (Lt. Col.) Stewart McCarver. Fang and Whiteside are in the Air Force. (Michael Abrams/Stars and Stripes) 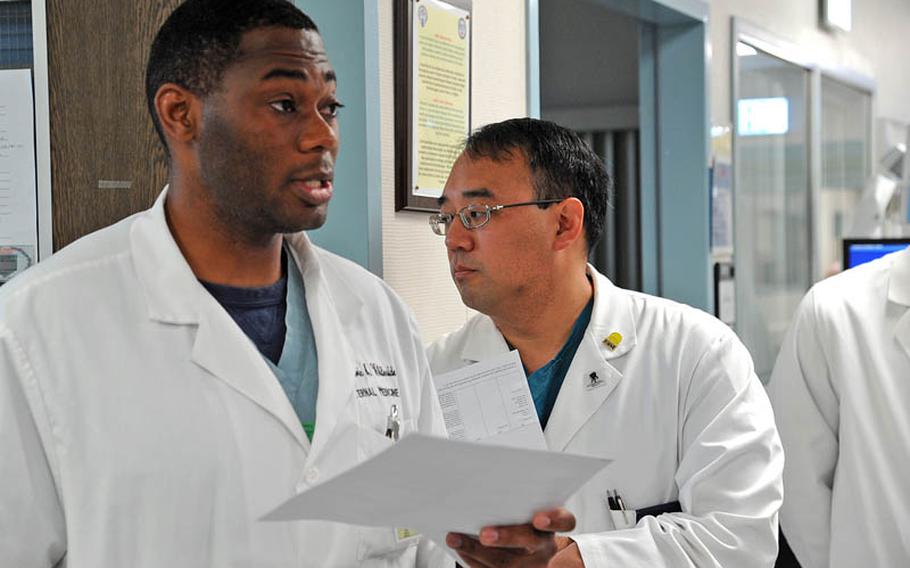 Buy Photo
Dr. (Lt. Col.) Raymond Fang, right, watches nurses tend to a patient as Dr. (Capt.) Derric Whiteside talks about a patient&#39;s condition during the morning rounds in the intensive care unit at Landstuhl Regional Medical Center on May 20. Fang is leaving the LRMC after seven years. Fang and Whiteside are in the Air Force. (Michael Abrams/Stars and Stripes) 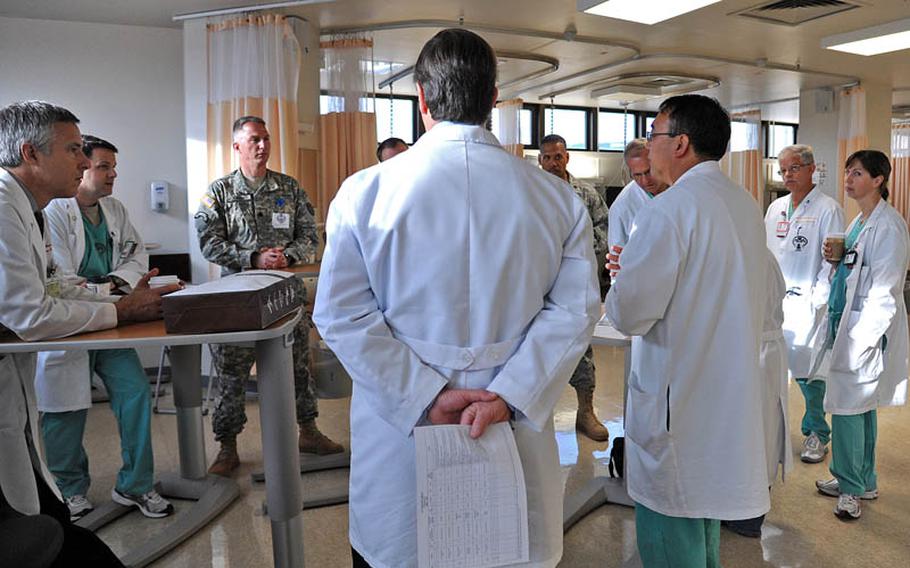 LANDSTUHL, Germany &mdash; On a recent Friday during rounds in the intensive care unit, Air Force Dr. (Lt. Col.) Raymond Fang listened as a young resident described how he was caring for a patient injured in a roadside bomb blast four days earlier. The patient was about to be flown home.

The resident towered over Fang, whose soft and impassive face was the antithesis of intimidating. Still, the resident&rsquo;s hands quivered slightly. He wasn&rsquo;t only facing Fang, flanked by several colleagues, but a firing squad of experience.

Fang interrupted the resident only once, to ask whether the patient should stay at Landstuhl a few days longer. This would allow him to come off a ventilator before his flight to the States.

&ldquo;There are a lot of bad things that can happen on a flight,&rdquo; Fang explained. &ldquo;Sometimes keeping them on the ground in Landstuhl is better than sending them right now, and that takes a bit of judgment and experience.&rdquo;

Few in military trauma have more judgment and experience than Fang, who for the past seven years has treated a vast number of wounded troops who arrive at Landstuhl Regional Medical Center in Germany, the hub for servicemembers injured downrange.

In July, Fang will leave for the Baltimore Shock Trauma Center, where he will train other Air Force medical personnel. His colleagues at Landstuhl are apprehensive about the loss of Fang&rsquo;s knowledge and stewardship.

The longest-serving surgeon at the hospital, Fang has overseen the transformation of Landstuhl from what he described as a &ldquo;sleepy little hospital in the German hills&rdquo; to one that was nearly overwhelmed by casualties in the early years of the wars, and now to one that&rsquo;s emerging as a cutting-edge trauma center boasting a 99 percent survival rate.

&ldquo;He has been the bedrock of this program. He was here for its inception and built it up to what it is today,&rdquo; said Air Force Dr. (Maj.) Brad Putty, a trauma surgeon at Landstuhl for the past two years. &ldquo;It&rsquo;s going to be a very sad and empty feeling when he is not here.&rdquo;

But Fang believes the trauma program will remain just as strong without him. He helped build it to do exactly that, by instilling a machine-like, systematic approach to care that values teamwork more than a single surgeon&rsquo;s talent or ego.

Fang arrived at Landstuhl on Sept. 27, 2004. About a month later, troops in Iraq assaulted Fallujah for the second time. In the ensuing battle, Marines and soldiers faced the most intense street-to-street fighting they&rsquo;d seen since Vietnam.

By the end of November, nearly 500 injured servicemembers had passed through Landstuhl. Then, just before Christmas, a suicide bomber detonated himself in a mess hall tent at a base in Mosul, killing 13 U.S. soldiers and sending in more than 40 wounded troops and civilians.

&ldquo;Two of the busiest times at this hospital were in my first six months,&rdquo; Fang said. &ldquo;I thought, &lsquo;Wow, what have I gotten myself into?&rsquo;&thinsp;&rdquo;

After these events, Fang and his colleagues knew they could not continue in a traditional top-down approach. Every single team member had to be empowered to make important decisions based on scientific evidence &mdash; the type of guideline-based system that was becoming standard at leading stateside trauma centers.

&ldquo;You all have to lose a little bit of your autonomy,&rdquo; Fang said. &ldquo;But then you give more consistent care to everybody.&rdquo;

Their bible was a golden-colored book published by the American College of Surgeons, which detailed what staff and resources were necessary to build a state-of-the-art trauma program. Outside experts were brought in as consultants, and the book&rsquo;s practices were slowly adopted. In August 2007, the American College of Surgeons verified Landstuhl as a Level II trauma center, the first such designation for a hospital outside the States.

Today, Landstuhl is on course to attaining Level I verification, meaning that beyond providing top-notch care, the hospital&rsquo;s staff is also teaching and doing innovative research.

&ldquo;We want the soldiers and their families to know that the care here is equal to or better than the care in the U.S.,&rdquo; Fang said.

A new type of trauma

Long after the heated early years of the Iraq War, injured troops continued to arrive at Landstuhl in busloads each morning, their wounds ever more complex and devastating. Fang stayed beyond his scheduled three-year tour. Treating servicemembers, he said, was more rewarding and invigorating than treating civilian patients.

In San Antonio, where Fang trained in trauma surgery, he would often work four days straight without seeing his family, only to be greeted by patients &ldquo;who were not the best citizens,&rdquo; he said. One gave him the finger.

&ldquo;Whereas these guys are doing something noble for their country,&rdquo; he said. &ldquo;And you are trying to get them home in the best condition possible.&rdquo;

The number of wounded spiked again with the 2007 Iraq surge. In 2009, operations in Afghanistan ramped up, sending another wave of wounded through the hospital&rsquo;s doors.

Roadside bomb blasts left arms and legs mangled, arteries severed by shrapnel, spinal cords smashed to pieces, skin melted and mottled by burns. Often, Fang said, the trauma center focused on simply keeping people alive and moving them back to the States. Patients stayed at Landstuhl for an average of three to four days, he said.

&ldquo;I often thought, &lsquo;What are they (the wounded) going to ultimately do with these injuries?&rsquo;&rdquo; he said. &ldquo;But then they were gone from me, and I was on to the next person.&rdquo;

Most of Fang&rsquo;s patients never remember him: They are so heavily sedated and severely injured that they do not recall their short stays. But if they make it to Landstuhl alive, chances are they will stay that way.

The hospital has posted an unprecedented survival rate of 99 percent, a major increase from previous wars. Fang credits the entire continuum of care across the trauma system, from downrange surgeons to Landstuhl&rsquo;s staff and the doctors and nurses at stateside hospitals. The system has allowed doctors to examine data and make treatment changes just weeks later &mdash; something that has never been done in prior U.S. conflicts.

But it only works when doctors and surgeons put themselves aside in favor of proven guidelines, and that made Fang the perfect fit to spearhead the system at Landstuhl.

&ldquo;He is cautious. He is not a cowboy,&rdquo; she said. &ldquo;I feel safe when I work with him. And he has such a wealth of knowledge that he always knows exactly what he is doing.&rdquo;

That knowledge was on full display Friday as Fang made the rounds. Shortly after he suggested to his resident that the patient stay three more days at Landstuhl, the lead doctor grabbed the phone in the intensive care unit.

The patient wouldn&rsquo;t be flying out after all.