A view down one of Landstuhl's renovated medical-surgery wards. Landstuhl, which admitted hundreds of wounded troops a month at the height of the wars in Iraq and Afghanistan, hasn't been treating enough trauma patients over the last two years to maintain its Level I trauma center status. (Joshua L. DeMotts/Stars and Stripes)

A view down one of Landstuhl's renovated medical-surgery wards. Landstuhl, which admitted hundreds of wounded troops a month at the height of the wars in Iraq and Afghanistan, hasn't been treating enough trauma patients over the last two years to maintain its Level I trauma center status. (Joshua L. DeMotts/Stars and Stripes) 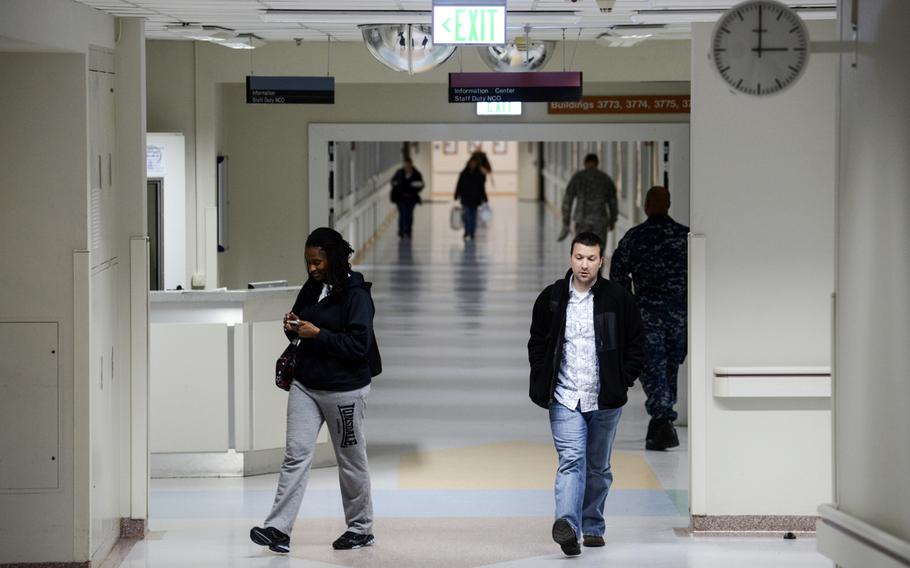 People walk through Landstuhl Regional Medical Center's "four corners," which much of the staff uses as a reference point when giving directions to patients and visitors lost in the hospital's three miles of hallways. Landstuhl, which admitted hundreds of wounded troops a month at the height of the wars in Iraq and Afghanistan, hasn't been treating enough trauma patients over the last two years to maintain its Level I trauma center status. (Joshua L. DeMotts/Stars and Stripes) Mohammed Dawoud, a resident of Helmand province, Afghanistan, describes the firefight on his farm during which he was shot three times. He says if Afghan forces can roll back the Taliban insurgents, then there will be peace. He is shown here on Tuesday, Sept. 23, 2014. (Josh Smith/Stars and Stripes) 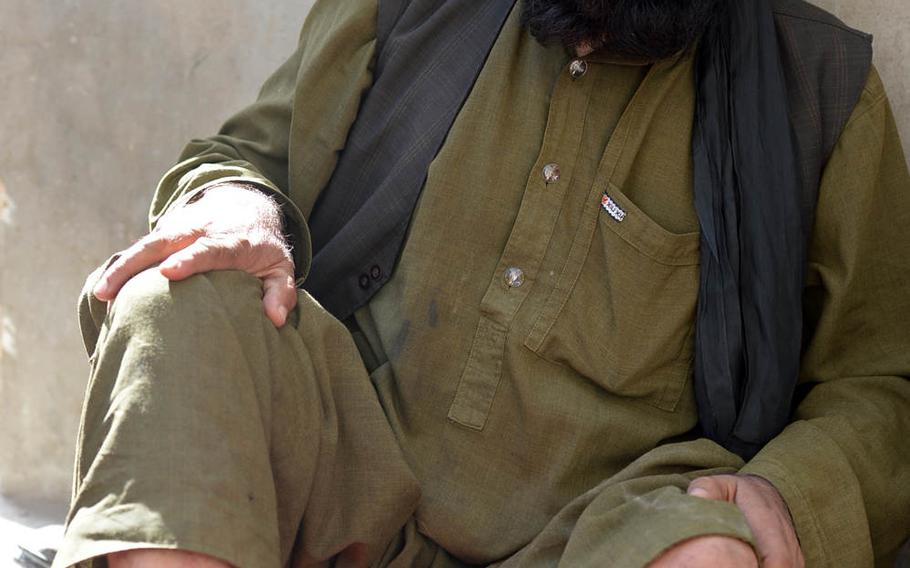 Gul Janan displays his leg, part of which he lost when he stepped on a mine left in his house by retreating militants during fighting with Afghan security forces in Helmand province. He is shown here on Tuesday, Sept. 23, 2014. (Josh Smith/Stars and Stripes)

LANDSTUHL, Germany — On returning from his first trip to Afghanistan as defense secretary in March, Chuck Hagel had planned a stopover that is something of a tradition for administration officials conducting America’s longest war — a visit to injured troops at Landstuhl Regional Medical Center in Germany.

But there was a hitch in the plan that would have seemed nearly impossible a year ago. The day Hagel planned to visit the hospital — the first stop for all injured U.S. personnel evacuated from the war zone — not a single American casualty was laid up there.

Col. Barbara Holcomb, Landstuhl’s commander, cautioned against reading too much into the rare absence of U.S. casualties.

But, she said, the number of wounded streaming out of Afghanistan has been trending downward since 2010, when nearly 500 U.S. servicemembers deployed there died. Earlier this year, the entire U.S.-led coalition went more than a month without losing a servicemember in combat — the longest such streak in 10 years, according to an Associated Press casualty database.

“It’s definitely a change for the good, I think,” Holcomb said.

But a little more than a year from now, this positive turn is likely to cost Landstuhl a distinction that it worked years to get: its verification as a Level I trauma center.

The hospital’s trauma verification expires May 13, 2014, three years after it was added to the nation’s roll of Level I trauma centers, a list that includes big-league names like Cedars-Sinai Medical Center in Los Angeles and Massachusetts General in Boston.

Budget pressure from sequestration and other cuts forced Landstuhl to slash $14 million in spending this fiscal year, Holcomb said, and to consider eliminating some things required of a Level I facility. But the decision to forgo renewal of its Level I trauma verification will more likely be forced by the situation in Afghanistan than by any move made by the military or Washington.

Landstuhl, which admitted hundreds of wounded troops a month at the height of the wars in Iraq and Afghanistan, hasn’t been treating enough trauma patients to maintain its Level I status for the last two years, Holcomb said.

Only the busiest hospitals in the U.S., most of them in dense urban areas, treat the 1,200 trauma cases a year required to become a Level I trauma center — although some hospitals are verified by treating smaller numbers of more severe “major trauma” cases.

According to hospital data, the number of wounded admitted has fallen 55 percent since 2011. Just one of its 10 busiest months since the terrorist attacks of Sept. 11, 2001, occurred after it was verified a Level I trauma center.

That was July 2011, the height of the U.S. surge in Afghanistan, when 235 wounded were evacuated to Landstuhl, according to hospital statistics. Its busiest month ever came in November 2004, when it treated 391 casualties.

“We no longer have that workload,” Holcomb said.

That decline has led to a peculiar problem for Landstuhl, which once struggled to keep up with a workload generated by two wars.

“Now we have excess staff.”

The hospital is increasing its enrollment of retirees and other beneficiaries in Europe to keep doctors busy, expanding its rolls by about 1,000 patients since September, she said. Surgeons brought in to flesh out the hospital’s trauma staff are keeping busy treating more common ailments, such as back pain.

“They may not be as busy as they were during some of our peak times,” Holcomb said. “But they’re still certainly being productive.”

As the number of casualties declines and budgets grow tighter, it’s becoming harder to justify the expense of fulfilling some Level I trauma criteria, such as having at least one neurosurgeon on hand around the clock to treat traumatic brain and spinal injuries.

It “doesn’t necessarily make sense to try and keep that capability” if it’s used infrequently and German hospitals can handle the caseload, Holcomb said.

The bulk of cuts, when they come, are expected through attrition. When civilian personnel subject to the “five-year rule” limiting the duration of overseas assignments return to the States at the end of their tours, some won’t be replaced, Holcomb said.

The focus of the cuts will be on reducing capacity, not the capabilities the hospital has gained during the wars in Iraq and Afghanistan. “There’s very few surgeons in the Army right now that didn’t deploy at least once or twice” or serve in one of the military’s major hospitals, Holcomb said. “So we’ll have that capability in our medical system for a while.”

Dr. Michael Rotondo, who chairs the American College of Surgeons’ Committee on Trauma, which verifies hospitals as trauma centers, said most people are likely to see the logic in some cuts as Afghanistan winds down and budgets dwindle.

“I think that as we prepare for the inter-war period, it makes sense that certain changes in the structure and certain processes are altered to match the operational tempo downrange and so that the resources match the need.”

While Landstuhl might not be able to meet the committee’s benchmarks to qualify as a trauma center, the “vast majority of care” would likely remain unchanged, he said.

“What I wouldn’t want to do is have some message transmitted, simply because I know better, that by virtue of the fact that the college no longer is verifying this center that they don’t have any capability to take care of our wounded soldiers. We both know that they do.”