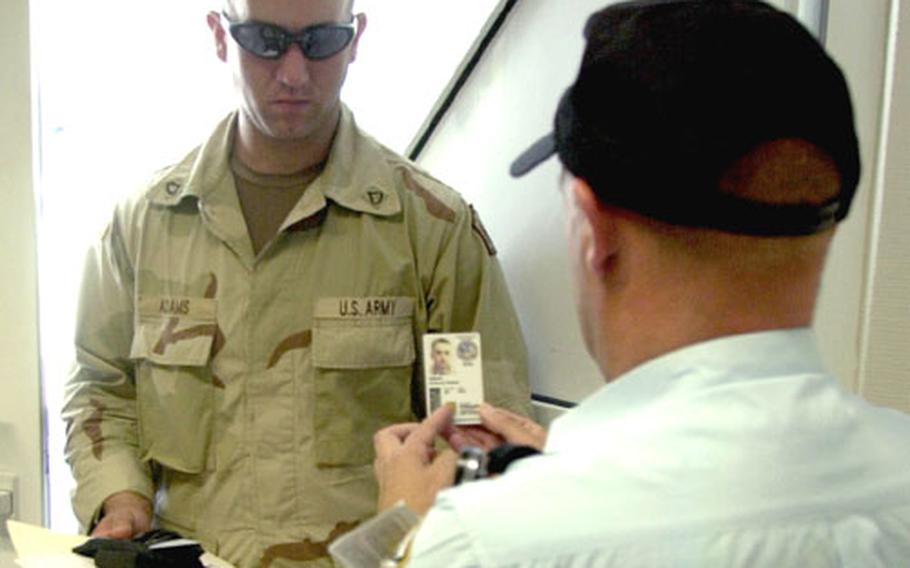 A Pond security guard at Landstuhl Regional Medical Center, Germany, checks the identification card of Pfc. Anthony Adams on Thursday. A minimum of two guards will be stationed at each of the eight entry points into the hospital starting Monday. (Steve Mraz / S&S)

Visitors to the largest American hospital outside the United States will soon see bomb-sniffing dogs at entry gates, more guards patrolling inside the hospital, additional foot patrols along the perimeter, fence-line cameras and lighting around the installation.

Access into the sprawling, multiwing hospital is being reduced from about 100 doors to eight doors. Starting on Monday, those seeking entry into the hospital must produce identification cards and have their bags checked by security guards stationed at each of the eight entry points.

While security measures are increasing for the indefinite future, the threat condition is remaining at Bravo. The Bravo level is used when an increased and more predictable threat of terrorist activity exists, according to a Department of Defense Web site.

The heightened security measures are not based on specific threats against Landstuhl, but rather come as a response to current world events, Francis said.

&#8220;The battlefield is no longer located just in Iraq and Afghanistan,&#8221; he said. &#8220;We know that the bad guys are willing to go off and use public areas, subways and the like. With that, especially with the frequency that these were happening, it made us &#8212; and we&#8217;re talking at all levels up to USAREUR (U.S Army Europe) &#8212; relook at how we do business around here to ensure that we&#8217;re doing everything that we can to make this as safe of an environment for both the patients and the people who live here.&#8221;

Visitors are encouraged to arrive at Landstuhl 15 to 30 minutes earlier than normal and to have their ID on them at all times.

The goal is to make the increased security measures as user-friendly as possible, Francis said. To do that, high-visibility signs will be placed in parking lots directing visitors to the nearest entrance, and an information campaign will begin to let those on Landstuhl know what to expect.

&#8220;I want to emphasize to them that whatever I implement, the impact that it has on them is going to have the exact same impact on me because this is where my family walks across the street to do their day-to-day living,&#8221; Francis said.

The improvements are expected to cost several million dollars and are being funded by a variety of sources within USAREUR.

It is unclear whether Army installations across Europe are implementing similar security procedures.

On July 7, four suicide attackers detonated bombs on three London subway trains and a bus, killing themselves and 52 others. Two weeks later on July 21, terrorists attempted more bombings against public transportation in London, but the bombs failed to fully detonate.