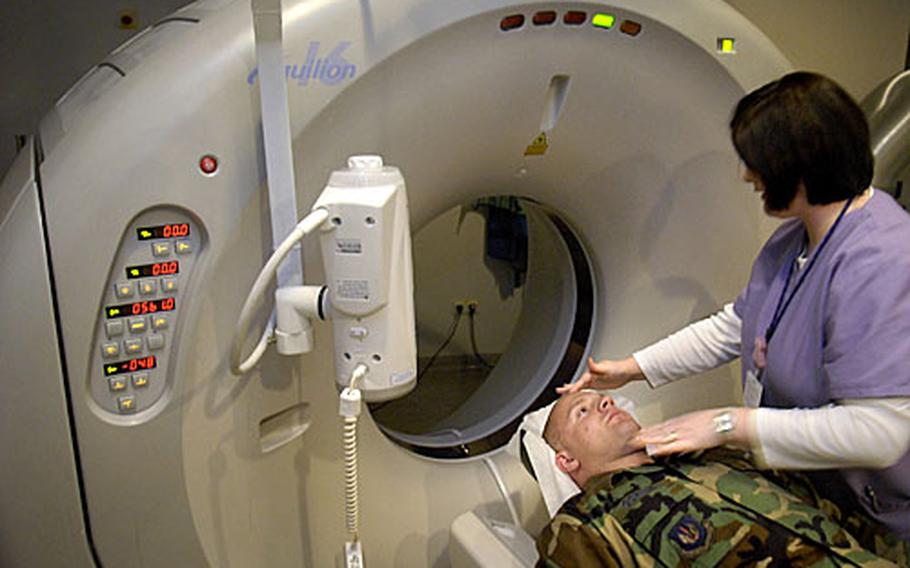 LANDSTUHL, Germany &#8212; Landstuhl Regional Medical Center wants to hire 48 new employees to ramp up treatmentof traumatic brain injuries, which affect up to 30 percent of servicemembers returning from Iraq and Afghanistan.

Hospital officials submitted the plan to develop an autonomous brain injury center to Europe Regional Medical Command last week. If approved, plans for the center would require authorization from the Army Surgeon General before moving forward.

Considered one of the hallmark injuries of the Iraq war, traumatic brain injury, or TBI, disrupts normal brain function and typically is caused by a blow or jolt to the head. Depression, anxiety, aggressive behavior and cognitive issues such as trouble with short-term memory and concentration are among the most common side effects.

The planned TBI center would focus on developing better ways to treat, diagnose and screen for TBI. The research it yields also could shape the development of new protective gear, vehicles and combat operations procedures for troops who have been exposed to blasts but are considered well enough to stay downrange.

&#8220;We hope to gather data that will allow us to advise on policies that will guide the commanders on the appropriate employment of their troops,&#8221; said Army Dr. (Col.) Stephen Flaherty, chief of the hospital&#8217;s trauma center. &#8220;The units themselves have made changes in how they employ their forces,&#8221; though there are no military-wide guidelines.

Landstuhl began screening every patient coming in from Iraq and Afghanistan for TBI in May 2006 after doctors noticed that many of them had inexplicable problems that later were diagnosed as TBI.

Since then, 23 percent of the 10,000 patients screened for TBI have tested positive. About 98 percent of those have &#8220;mild&#8221; TBI, which by definition cannot be detected with most brain scanning technology.

The surge in military-related TBI research stands to expedite breakthroughs and &#8220;really galvanize the field,&#8221; said Ramona Hicks, a TBI researcher with the National Institutes of Health.

Along with drawing more attention and federal money to the problem, the military also can provide critical baseline data by administering predeployment TBI screens, which could go a long way in improving how the condition is diagnosed, Hicks said.

Advances in imaging technology should be able to provide more accurate and sensitive tools for diagnosing mild TBI in the near future, Hicks said.

Right now, most doctors prdescribe drugs to treat symptoms of the problems associated with TBI, from anxiety to aggressive behavior. However, scientists are trying to develop holistic drug therapies and treatments, &#8220;things that would go right for the injury mechanism instead of just treating the symptoms,&#8221; Hicks said.

The goal, she said, is to find drugs that can be administered shortly after the injury has been sustained to prevent the cascading effects of TBI from causing further damage. Landstuhl likely would not focus on those kinds of treatments because it receives patients from Iraq and Afghanistan hours, if not days, after they have been injured.

Though most patients only stay at Landstuhl for a short-time, the hospital is the gateway to medical care for all combat casualties and therefore a logical place to house a comprehensive TBI center, he said.

It is unclear whether patients would stay longer at Landstuhl if the center is approved.

Army Col. Brian Lein, Landstuhl commander, said he expects to receive word on the proposal by the end of the year.

Hospital officials could not provide a cost estimate associated with the proposal. However, the center likely would be funded by a portion of the $450 million allocation Congress earmarked for TBI research and treatment this year, Flaherty said.

Signs of TBISymptoms of traumatic brain injury can be mild, moderate or severe, depending on the extent of the damage to the brain.

Signs of mild TBI include:

headacheconfusionlightheadedness or dizzinessblurred vision or tired eyesringing in the earsbad taste in the mouthfatigue or lethargya change in sleep patternsbehavioral or mood changestrouble with memory, concentration, attention, or thinkingA person with a moderate or severe TBI may show these same symptoms, but also may have:

a headache that gets worse or does not go awayrepeated vomiting or nauseaconvulsions or seizuresan inability to awaken from sleepdilation of one or both pupils of the eyesslurred speechweakness or numbness in the extremitieso loss of coordinationincreased confusion, restlessness, or agitationSource: National Institute of Neurological Disorders and Stroke. On the Web at, www.ninds.nih.gov.