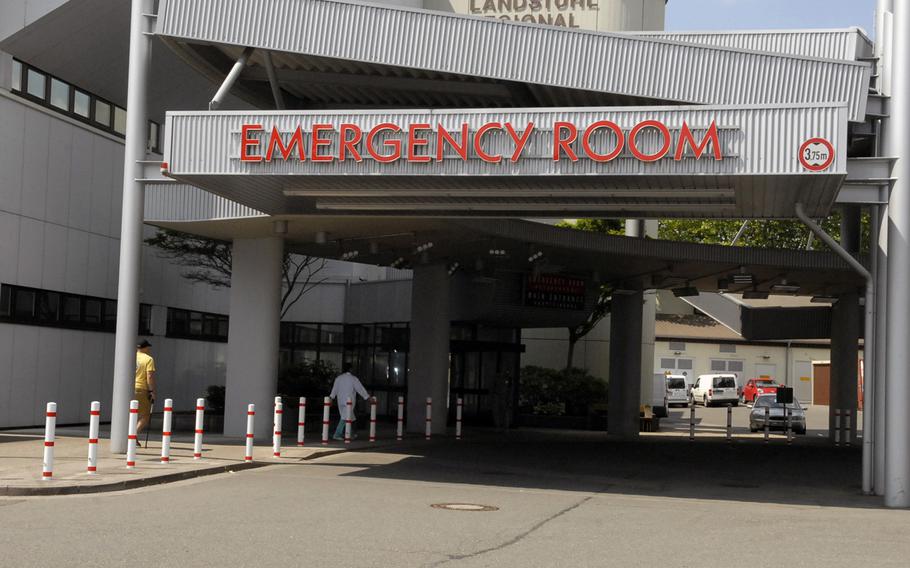 Buy Photo
The entrance to the emergency department at Landstuhl Regional Medical Center. A new tobacco-free policy at Landstuhl Regional Medical Center, slated to go into effect Feb. 1, 2016, is being postponed for two weeks while hospital officials further review the proposed changes, some of which have drawn criticism from civilians. (Stars and Stripes)

KAISERSLAUTERN, Germany – A no-tobacco policy at Landstuhl Regional Medical Center, slated to go into effect Monday, has been delayed for two weeks while hospital officials review the measure, which has drawn criticism from some civilians.

The policy, which would designate LRMC a tobacco-free medical campus, now will be implemented on Feb. 15, said Chuck Roberts, an LRMC spokesman.

In a statement this weekend, Roberts said the delay was “to ensure that concerns presented by the German works council and hospital staff are appropriately considered.”

Roberts didn’t elaborate on those concerns, but during a town hall meeting last week to inform staff of the new policy, officials were questioned on how they could legally prohibit U.S. civilian employees from using tobacco during their lunch breaks.

The new policy would prohibit hospital employees, patients and visitors from using tobacco products or electronic nicotine devices on hospital grounds. The ban applies to all personnel assigned to U.S. Army Medical Command, including military, civilians, contractors and local national employees, whether they see patients or not.

While local nationals would be able to use new designated smoking areas outside the hospital’s green perimeter fence, servicemembers who work at the hospital or those considered patients won’t be able to smoke while in uniform. The same goes for civilian employees during working hours, which hospital officials say includes lunchtime, regardless of location.

Stephanie Clark, a system administrator with Regional Health Command Europe at Sembach, said she supports a tobacco-free medical campus but was concerned that the policy, as it stood, was unfair and discriminated against those who use tobacco products.

Nonsmokers, she said, may use their breaks and lunch as they see fit, but smokers are not allowed that same privilege.

Clark, who spoke at the town hall last week, said the policy would apply to her since her department falls under Army Medical Command, which is scheduled to make all its facilities tobacco-free sometime in May.

“Smoking is an addiction,” she said. “I personally have tried everything out there that there is to try to quit smoking. I have never been able to do it. To ask me to go a nine-hour day without anything, I can’t do it.

Col. James Laterza, LRMC’s commander, said he would have his legal experts review Clark’s concerns, although he said that Army Medical Command had already been consulted about the lunch period.

“Those are not things that we jumped on and said, ‘OK, well, we think it should include lunch,’” he said.

The Army Surgeon General’s Office directed that “we would be tobaccoless by the summer of 2016,” Laterza said at the town hall.

Officials at the town hall pointed to a new Army regulation that says health care personnel “will not use any tobacco products during the duty day or while in uniform.”

“My thoughts on that were reluctantly compliant,” Laterza said. “No. 1, boy, it’s going to be hard to do because we have people who have a tobacco addiction.”

But, after giving it more thought, he concluded that to be a “world-class” hospital, “we need to lead by example. Tobacco is really the catalyst for a lot of bad things to happen in bodies.

“Our job is health care. That is where we stand. We have to lead by example.”

Other medical command facilities to be affected when the policy expands this spring include Army health, veterinary and dental clinics, as well as Army Public Health Command Europe.

A number of civilian and military hospitals in the States have already gone tobacco-free.

Civilian health care workers, however, are able to leave the hospital grounds to smoke while on break, and they are also allowed to smoke in their cars, Elliott said, two allowances negotiated with the union representing civilian employees.

The tobacco-free changes, for the most part, were received positively, he said. “I think there’s a growing push from people wanting to be healthier,” he said.

At LRMC, officials say there’s been a recent uptick of interest in tobacco cessation programs. Tobacco users are being encouraged to take advantage of the services offered through the hospital to help smokers quit.