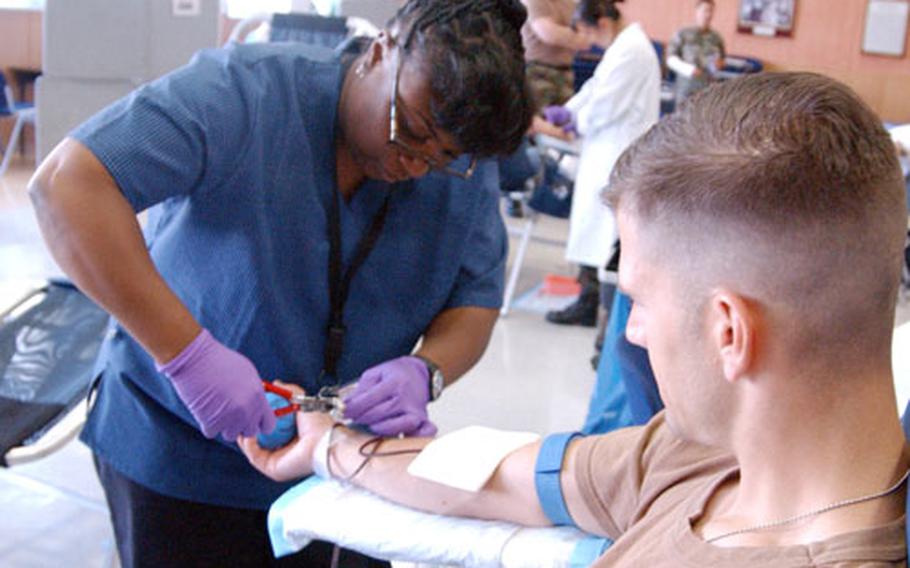 Spec. Craig Thompson gives blood while phlebotomist Peaches Tucker attends to him at a blood drive Wednesday at Landstuhl Army Regional Medical Center. "I just like to donate, knowing that it will help someone else," Thompson said. (Lisa Horn / S&S)

LANDSTUHL, Germany &#8212; The war may be officially over, however the demand for blood continues.

A blood drive Wednesday at the Army&#8217;s Landstuhl Regional Medical Center, home of Europe&#8217;s Armed Services Blood Program, was one of many the group organizes each year.

The need for blood varies from week to week, but according to Capt. Angel Colon, chief of the U.S. Army Europe Blood Donor Center, the supply is always in need of replenishment.

Emergency blood drives usually bring in many donors, however, it&#8217;s the regular donations that will keep the supply from falling dangerously short.

One such example occurred a month ago when an injured soldier coming from Iraq required so much blood that his need alone drastically decreased the donor center&#8217;s supply.

The soldier received a total of 142 blood components, which includes red blood cells, platelets and plasma.

But not everyone can donate their blood. The mad cow disease scare and troops who may have been exposed to malaria are just two of the deferments that have been added in recent years to a list of blood donor criteria.

Also putting a strain on the supply is the fact that blood must be constantly replenished because of its 42-day shelf life.

Once the blood has been collected, lab technicians at Landstuhl perform tests to determine the purity of the blood. An anti-coagulant is also added. Within a week, Ramstein Air Base&#8217;s blood shipment unit flies it to Iraq and other parts of the world where it is needed. Within 48 hours of it being prepared, blood will arrive downrange, Colon said.

While type O blood is always in demand because it can be given to anyone in an emergency, the donation of all blood types is vital to keep soldiers alive after their blood type has been determined.