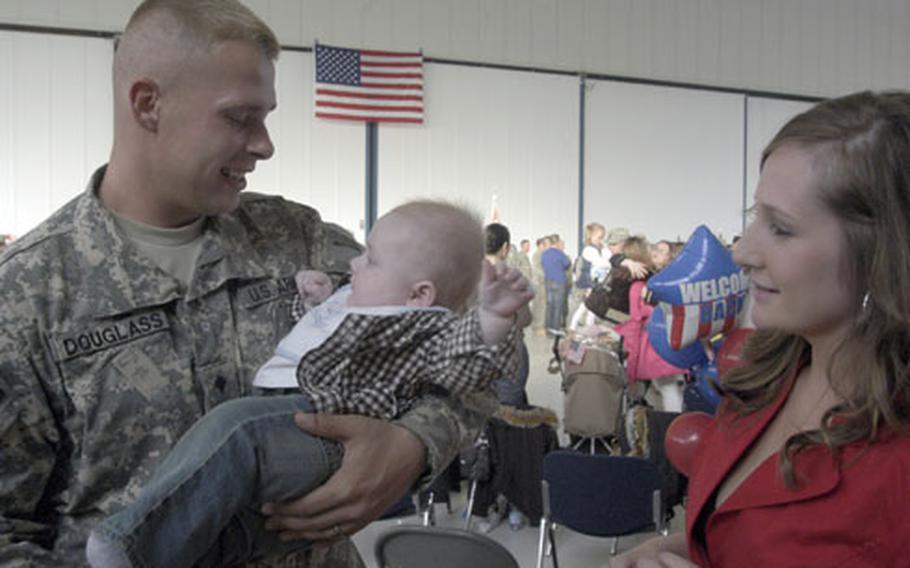 As Allison Douglass looks on, Spc. Michael Douglass holds his 6-month-old son Landen, who was born while his father was deployed to Iraq with Company C, 1st Battalion, 214th Aviation Regiment. The company returned from their 15-month deployment on Sunday. (Photos by Matt Millham/S&S)

As Allison Douglass looks on, Spc. Michael Douglass holds his 6-month-old son Landen, who was born while his father was deployed to Iraq with Company C, 1st Battalion, 214th Aviation Regiment. The company returned from their 15-month deployment on Sunday. (Photos by Matt Millham/S&S) 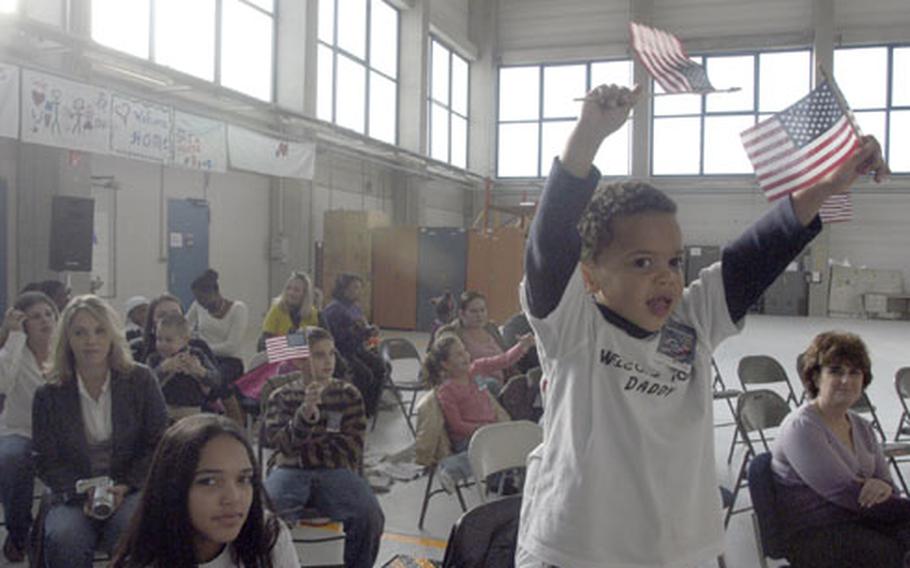 Lucas Joshua waves a flag as he waits for his father, Chief Warrant Officer 2 Derek Joshua, to return from a 15-month deployment to Iraq with Company C, 1st Battalion, 214th Aviation Regiment. The unit returned Sunday. (Photos by Matt Millham/S&S)

A lot had changed while the unit was away, both in Iraq and back in Germany.

In Iraq, the unit, an air ambulance company, provided service to Multi-National Division&#8211;West, which includes all of Anbar province, said Maj. Andrew Risio, the company&#8217;s commander.

Anbar, once one of the deadliest provinces for U.S. troops in the country, was the first to see a drop in violence after the locals teamed up with the Americans against the insurgency.

"It started out really busy," he said, but the number of medical evacuations they did peaked in November, and decreased steadily until about May. That&#8217;s when the injuries they were seeing started changing.

There was a lot less trauma, he said, and they found themselves responding to much more pedestrian calls, such as heart attacks and accidental injuries.

Back in Germany, Allison Douglass found out she was pregnant soon after her husband, Spc. Michael Douglass, deployed.

"I missed everything. All the appointments, everything," he said. "It was tough, and it was exciting all at the same time."

The same thing happened to the Morse family; three weeks after Sgt. Timothy Morse deployed, his wife, Nancy, found out she was pregnant with their third child.

But she got through it fine as well, relying on friends to get her through her husband&#8217;s second deployment &#8212; friends like Erika Keefer, who watched her husband, Staff Sgt. Jason Keefer, deploy to war for the fourth time.

This deployment was easier though, Erika Keefer said, because her two children &#8212; a 6-year-old daughter and 2-year-old son &#8212; kept her busy.

"You find out how strong you really are," Nancy Morse said.