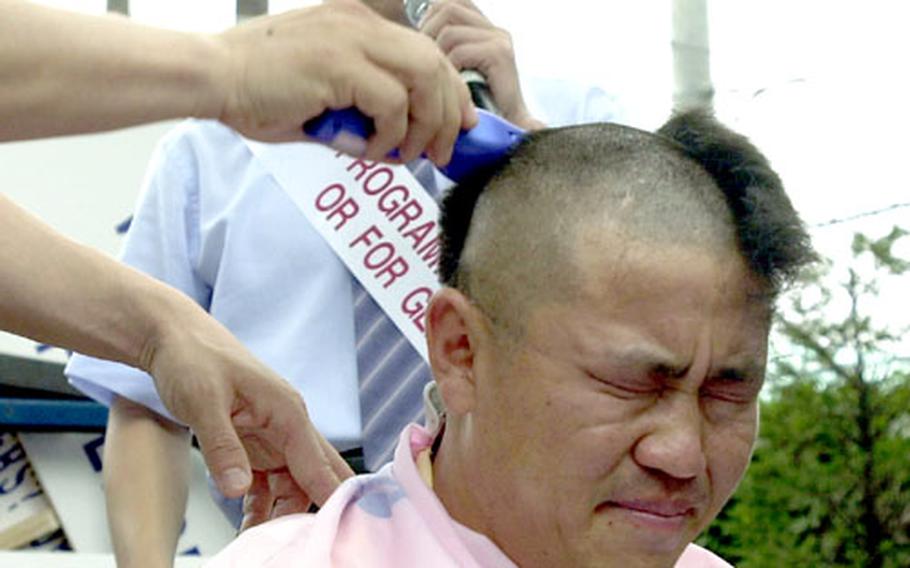 Lim Jong-han, a property owner, winces as other demonstrators protesting a new Army housing program shave his head Tuesday outside the gates of Yongsan Garrison in South Korea. More than 600 landlords and real estate agents protested the program, which will give landlords a deposit rather than monthly rent, driving down rental profits, they say. (Jeremy Kirk / S&S)

YONGSAN GARRISON, South Korea &#8212; Hundreds of landlords and real estate agents held placards and chanted in front of Yongsan Garrison on Tuesday, vehemently protesting a new housing system that will slice profits from their rentals.

The feisty but peaceful crowd of around 600 people &#8212; who ranged from young real estate company employees to graying women who own properties &#8212; chanted against the program. Many praised their interaction with Americans but warned the program will mean lower quality apartments for servicemembers.

The U.S. military didn&#8217;t consult them before deciding to switch to a modification of the Korean-style rent payment system for its servicemembers housed off-post, the protesters claimed. And they&#8217;re angry because they say they can&#8217;t make money under the new system, threatening their livelihood.

Under the former system, the U.S. military paid monthly rent, even fronting in advance up to $80,000 for two years of rent for civilians. Servicemembers pay rent monthly, often up to $2,000.

The new system uses a modified form of South Korea&#8217;s traditional way of paying rent, called cheonsae or key money. Under cheonsae, a tenant gives a large deposit to a landlord for a period of one or two years, and the landlord is free to invest the money. The deposit must be returned at the end of the lease, and the landlord&#8217;s profit is essentially whatever is made from investing the deposit.

The new U.S. system of paying for off-post housing is called HOME, or Home Opportunities Made Easy. It uses one company to administer deposits loaned by Korean banks to landlords. The U.S. military pays the interest on those loans from a soldier&#8217;s housing allowance, a system estimated to save the military around $25 million annually.

But &#8220;many other responsible [real estate agents] in Yongsan refer to the new HOME program as &#8216;Housing Opportunities Made Evil,&#8217;&#8221; Kim Yun-hwa, an agent with Realty Bank, told the crowd in English over a microphone.

U.S. officials contend monthly rent is more profitable and guarantees income for landlords. The military estimates it pays around $100 million annually for 4,000 servicemembers and civilians who live off base because of a lack of on-base housing.

Landlords and real estate agents also oppose the military&#8217;s choice of the Korea Regional Property Management Inc. to administer the program. KRPM was awarded a &#8220;master lease agreement;&#8221; a general contract was not put up for bid.

KRPM, a branch of the consulting company Mercer Inc., was scheduled to start the HOME program last week. The program has been delayed while the company sets up its equipment in the housing department, said Steve Oertwig, spokesman for Installation Management Agency, Korea Regional Office.

The delay is not related to problems finding landlords who are willing to participate in the program as alleged by some in Tuesday&#8217;s protest, Oertwig said. Real estate agents also have attacked KRPM, saying the company is not qualified to perform rental transactions.

Oertwig said he was not sure when the program will start. So far, around 40 real estate agencies have signed up to list their properties with KRPM. The company has created a Web site (www.usfkhousing.com) where servicemembers can select apartments.

On the Web site, a July 13 memorandum from IMA-KORO commander Brig. Gen. John A. Macdonald also defended the program, stating, &#8220;We are looking for honest, ethical realtors, businessmen and property owners to cooperate with KRPM to provide quality housing for U.S. military personnel and civilian employees at reasonable prices.&#8221;

Real estate agents would receive a fee from KRPM if their listing is selected.

Protesters characterized the program as a betrayal of real estate agents and landlords who have faithf`ully followed base rules on housing over the years. A yellow banner in English unfurled near base overpass said 50 years of cooperation will be spoiled by the program.

One real estate agent, who did not want to be identified, alleged the base seized base access passes granted to agents. Access passes are given to some agents to pick up servicemembers and show them apartments. Oertwig said the agents turned in their passes as an act of protest.

Jennifer Kleckner contributed to this report.