A recyclable cardboard box sits in the Dumpster set aside to collect bulk garbage, a no-no that contributes to the problem of trash in the region. U.S. residents living in Naples, Italy, can help by properly disposing of trash and recycling, officials said. (Sandra Jontz / S&S)

A recyclable cardboard box sits in the Dumpster set aside to collect bulk garbage, a no-no that contributes to the problem of trash in the region. U.S. residents living in Naples, Italy, can help by properly disposing of trash and recycling, officials said. (Sandra Jontz / S&S) 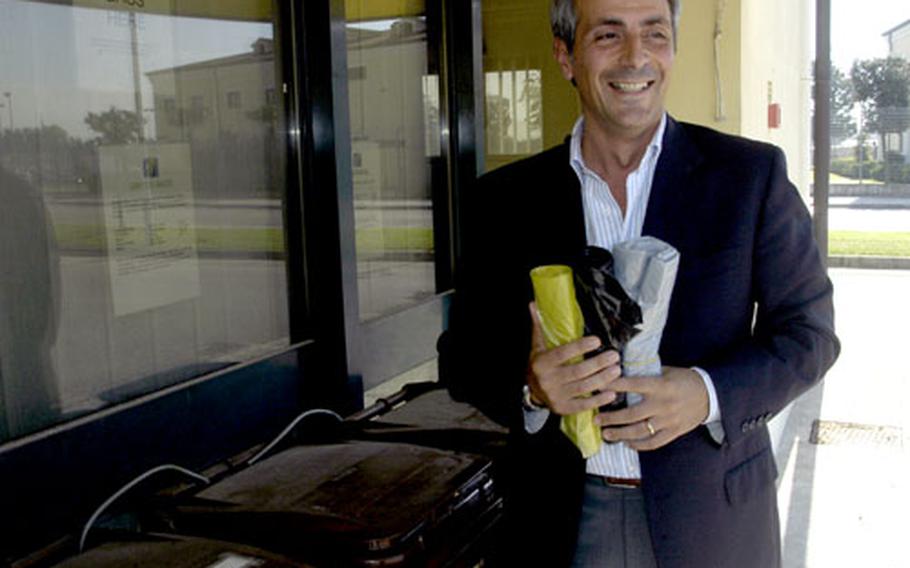 Pasquale Franco, the housing office’s estate division director for Naval Support Activity Naples, says there’s no reason for residents at the U.S. Navy housing base in Gricignano not to recycle. (Sandra Jontz / S&S)

NAPLES, Italy &#8212; Take out the papers and the trash: The garbage man is on his way.

For several weeks now, the Campania region has been grappling with a trash crisis that left garbage spilling out of bins and littering the streets, and pungent smoke billowing into the air from piles set ablaze by residents attempting to burn it away.

The crisis led Pasquale Franco, real estate division director with the housing office at U.S. Naval Support Activity Naples, into a political chess game with local officials to help broker a solution that benefits Gricignano residents, both local nationals and the U.S. military families living on the support site.

If all goes well, Franco said, on Thursday morning garbage collectors will be on base hauling the refuse to the landfill in Santa Maria Capua Vetere in Caserta.

Negotiations led to an increase in the amount of garbage the Gricignano community can deposit in the landfill, roughly six miles from the base, he said.

Local refuse officials agreed to increase the amount from 10,000 kilograms a day to 18,000 kilos, Franco said.

Part of a permanent solution, he said, is recycling.

In May 2005, the U.S. military instituted a recycling program.

At first, things went well, with residents recycling upward of 40 percent of their garbage, above the 35 percent mandated by Italian law, with which U.S. residents here must comply.

A current estimate is not available.

Although you wouldn&#8217;t know it by looking at the streets in Naples, Italy has a recycling program.

Garbage bins are loaded with recyclable materials, and when the bins are full, people take their regular garbage and dump it in recycling bins.

Some localities check the bins, such as in Piedimonte Matese, where Franco lives.

There is no reason for support site residents not to recycle, Franco said.

The base provides collection bins and bags, free of charge, for residents to separate plastics, aluminum and paper from other refuse.

An emergency dump site in the Aversa vicinity, which was to be reopened because of the crisis, will not need to, Franco said.

GMC, a local company, collects whatever trash it can, but with the local landfill full, the trash just sat on the base, said Linda Crusing, housing director.

The base set traps to control problems with rodents after some residents reported seeing rats, although none were caught in the traps, Franco said.

Anyone wanting to report pest problems should call the Housing Trouble Desk at DSN 629-4285.