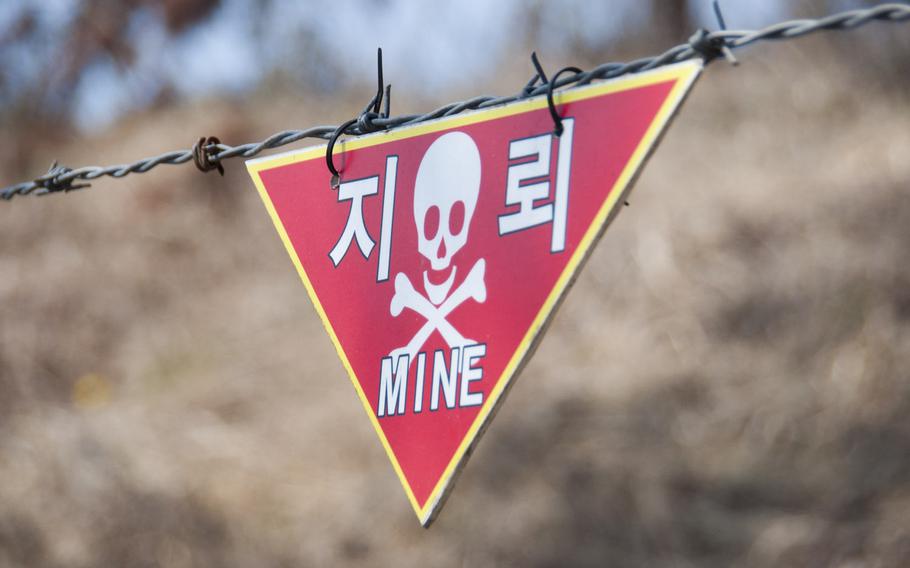 A land mine warning hangs from barbed wire at the DMZ near the Third Tunnel of Aggression in South Korea in this April 2015 photo. (C.J. Lin/Stars and Stripes)

A land mine warning hangs from barbed wire at the DMZ near the Third Tunnel of Aggression in South Korea in this April 2015 photo. (C.J. Lin/Stars and Stripes) 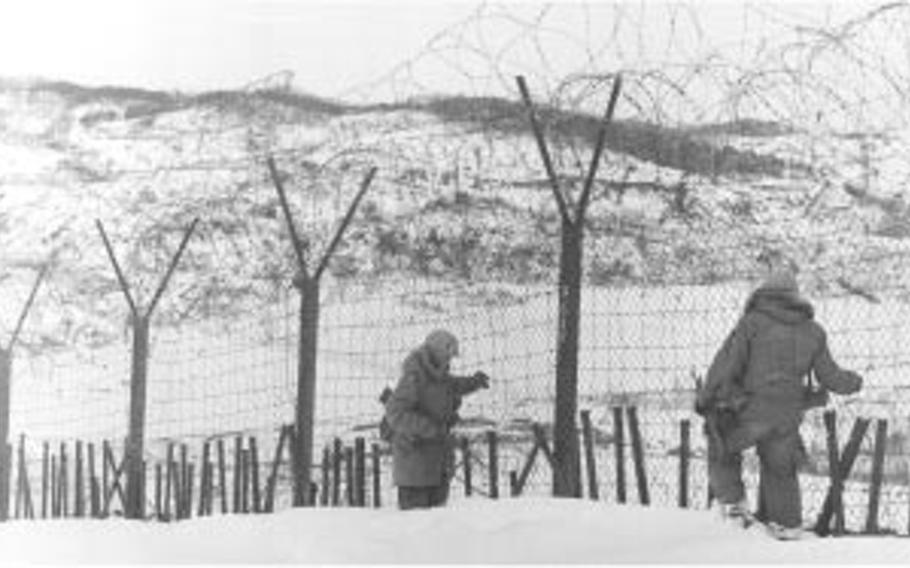 Soldiers from the 2nd Infantry Division inspect the fence along the south boundary of the Demilitarized Zone, South Korea, in 1970. U.S. Army photo (U.S. Army) Former U.S. Forces Korea commander Gen. B.B. Bell, second from left, looks out over the Eastern Transportation Corridor and into North Korea during a visit in the Demilitarized Zone on Jan. 8, 2008. Despite the DMZ being seen as the most heavily fortified border in the world, North Korean soldiers were recently able to cross the border and plant a land mine that injured two South Korean soldiers, a U.N. investigation found. Stars and Stripes (Stars and Stripes) 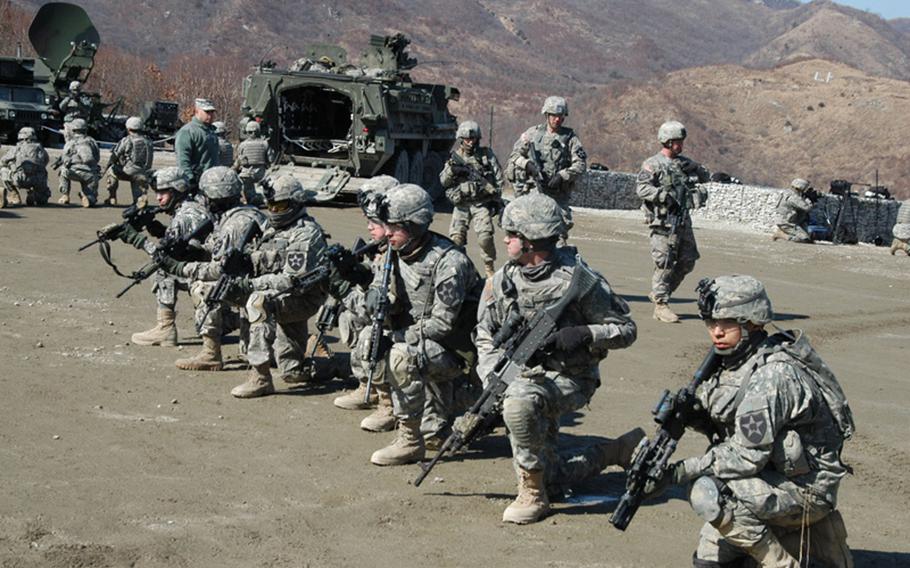 Soldiers line up Monday after exiting four Strykers brought to South Korea for a live-fire drill near the Demilitarized Zone. Despite the DMZ being seen as the most heavily fortified border in the world, North Korean soldiers were recently able to cross the border and plant a land mine that injured two South Korean soldiers, a U.N. investigation found. (Stars and Stripes)

SEOUL, South Korea — Marked by rivers and rugged mountainsides, and laden with more than 1 million land mines, the Demilitarized Zone is often referred to as the most heavily guarded border in the world.

Still, sometime in recent weeks, North Korean troops were able to sneak across the demarcation line between the two Koreas and plant several land mines on the south side. Two South Korean soldiers on a routine morning patrol triggered one of the mines last week. One soldier lost both of his legs below the knee; the second soldier lost a foot.

The incident, though revealing a weakness in the seemingly impenetrable border, doesn’t necessarily point to a major lapse in security, some analysts say. Instead, it highlights the near impossibility of thoroughly monitoring a swath of land that’s 160 miles long and 2½ miles wide.

A South Korean military official, speaking on customary condition of anonymity, said that while South Korean troops aggressively monitor the border with advanced surveillance equipment and their naked eyes, their ability to monitor some portions of the DMZ is limited.

“It’s very difficult to keep watch there for 24 hours a day, especially if it’s rainy or foggy,” said Kim Seongmin, a defector and former North Korean military officer who now heads Free North Korea Radio. “If North Korean troops want to violate the armistice agreement, they can do it there,” he said.

An Chanil, who was stationed at the DMZ as a platoon sergeant in the North Korean army, agreed.

“Nobody can see everywhere,” said An, who defected in 1979 and is now president of the World Institute for Korea Studies, a Seoul-based think tank.

He said ordinary North Korean soldiers would have difficulty crossing the demarcation line, though specially trained reconnaissance soldiers could do so with ease.

“The DMZ is their home ground,” he said.

The cease-fire that ended the fighting on July 27, 1953 did not bring an end to hostilities. To separate the two sides, the demilitarized buffer zone was created on the 38th parallel, and since then North Korean and South Korean soldiers have spent their days watching each other from across the expanse. U.S. forces — part of the U.N. Command Security Battaltion-Joint Security Area — help conduct security operations, including patrols.

Daniel Pinkston of the International Crisis Group said “microinteractions” between North and South Koreans have taken place at the DMZ for decades. These include troops who stumble upon each other from a few meters away, taunts and even — depending on the mood of the day — friendly shouts.

Perhaps the best-known encounter at the border came in August 1976, when two U.S. Army officers were killed by ax-wielding North Korean troops while trimming a tree that blocked the view between checkpoints. Thirty North Korean soldiers attacked the group for four minutes, killing Capt. Arthur Bonifas and 1st Lt. Mark Barrett. The U.S. and South Korea launched a mission three days later to cut down the tree.

In the years since the armistice, nearly 50 U.S. troops have been killed at or near the DMZ, according to U.S. Forces Korea records. Exact figures on the number of South Korean dead were not immediately available but could be as high as 500.

And even though the land mine attack was relatively small in scale and did not result in loss of life, the South Korean military official said the military puts it on par with the North’s 2010 sinking of the Cheonan warship, which killed 46 sailors.

“It doesn’t matter how many people were hurt because it was a North Korean provocation,” he said.

Pinkston said the fact that North Korean troops were recently able to cross into the South’s territory and plant the land mines also points to a need for improvements in monitoring and surveillance equipment, and it raises questions about what other infiltrating troops could do.

But sneaking across the border remains extremely difficult because of the risk of stepping on land mines and because of the terrain, which ranges from rivers and streams to steep mountains and gullies.

“It’s pretty risky and it’s not easy,” he said. “At that level, it’s the big leagues. There’s no margin for error.”