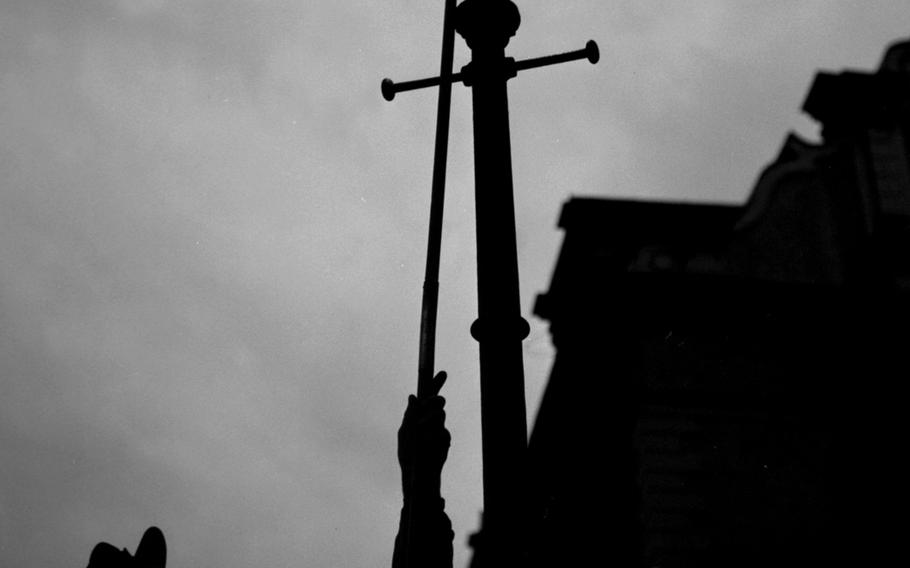 ONCE UPON a time lamp lighting was a respectable and almost heroic occupation. Like the postman and the iceman, the old lamplighter was a familiar and beloved figure.

But progress has interceded. Today lamplighters are almost as unwanted as blacksmiths. Indeed, anyone claiming this trade must surely be suspect.

Munich, once a haven for lamplighters, illustrates the march of time and electricity.

Munich is lit by 41,000 street lights. But, despite this, 713 gas lights have withstood the callow advance of technology.

They stand on quiet and quaint streets and are maintained by 12 municipal lantern wards — the modern, uniformed counterpart of the old lamplighter.

The chores of the wards differ considerably from the duties of the lamplighters of old. Modern gas lights are lit automatically, and only when a light fails do wards handlight them.

By contrast, the trademark of the lamplighter of yore was a long wooden pole he used as a lighter.

Munich historians report that the first gas lights were installed in the city in October 1850.

Many of the remaining gas lights are in Schwabing, where, blended with architecture of another age, they stir pleasant memories.

Two of the city's lantern wards — Josef Altmann and Wilhelm Schuepfer — stood at the intersection of See and Mandl in Schwabing and tried to explain that their work is not as romantic as story and song has made it out to be,

"We repair and maintain gas lights," Altmann said. "We are known as Gasanzuender (gas lamplighters), but we only light lamps when they go out."

Demonstrating the lighting technique, Altmann, a small man, shinnied up a pole and poked a match into a lamp that had flickered out.

As Altmann and Schuepfer discussed their work, dusk fell on a scene that for a moment seemed to be reminiscent of long ago. Gas lights glowed in the encroaching darkness and along the street.

Then, assured that the mechanism controlling the faulty light was in working order, Altmann and Schuepfer shouted "Auf Wiedersehen" to a nosy tourist, climbed into their municipal car and roared off into the twilight.