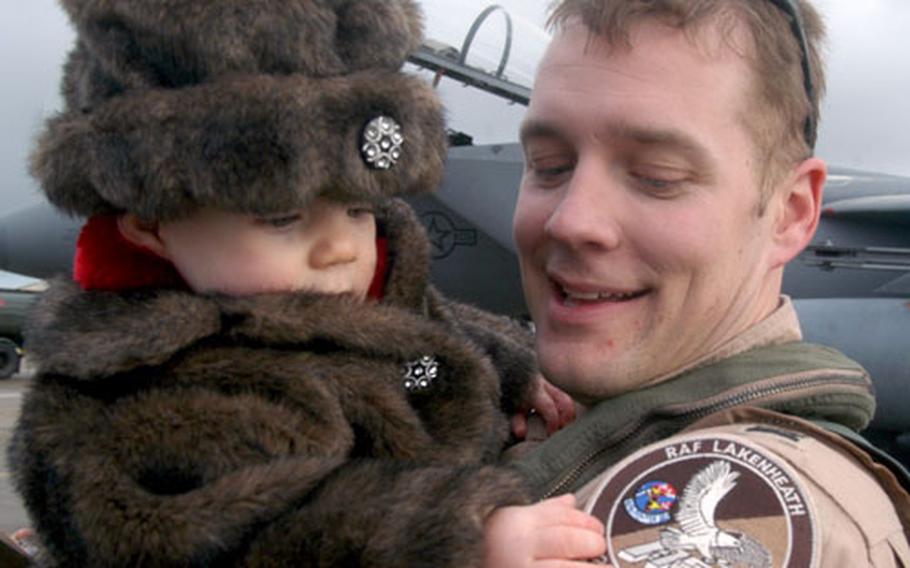 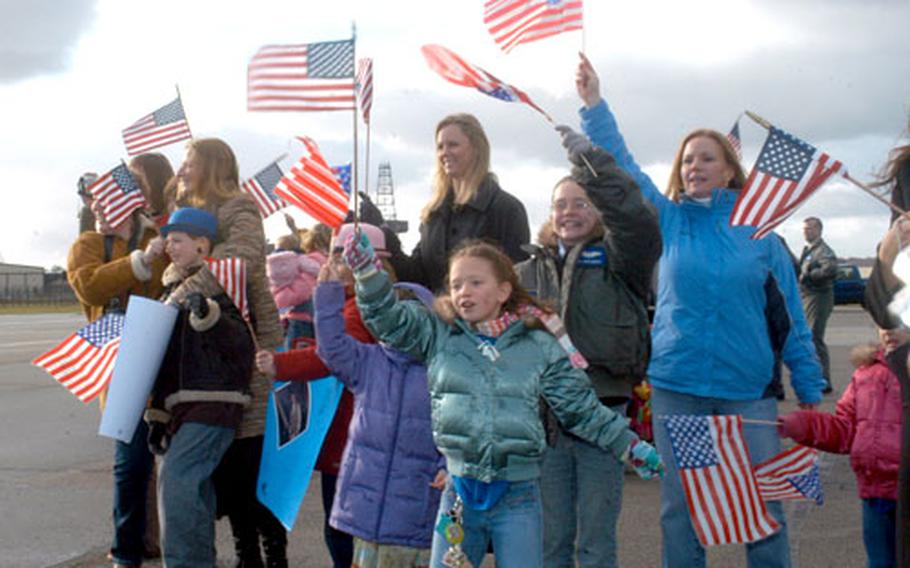 Family members of 492nd Fighter Squadron pilots and weapon systems officers wave U.S. flags as F-15E jets roll down a flightline at RAF Lakenheath, on Wednesday. The pilots and the weapons systems officers just returned to the base from a four-month deployment to Southwest Asia. (Sean Kimmons / S&S)

RAF LAKENHEATH, England &#8212; Capt. Chris Thompson of the 492nd Fighter Squadron was treated to a once-in-a-lifetime moment when he climbed out of his F-15E Strike Eagle on Wednesday on the flight line at RAF Lakenheath.

His daughter, Allie, took several tottering steps toward him on the tarmac and then fell into his arms, the first attempt at walking he had ever seen his little girl make.

Thompson was one of two dozen F-15 crewmembers who returned from a four-month downrange deployment to fly missions over Iraq and Afghanistan.

The fighter crews were the vanguard of a group of about 360 members of the 48th Fighter Wing returning this week.

The Air Force did not release the exact location of the 48th Fighter Wing&#8217;s deployment due to concerns voiced by the host country, said base spokeswoman Capt. Beth Horine.

Two waves of 12 fighters each returned to Lakenheath, intermixed with a large group of support personnel, including aircraft maintenance workers, security forces and administrative staff, Horine said. More groups were expected to follow Thursday, returning the bulk of the England-based airmen to Lakenheath, she said.

For some, the deployment felt like a long one but the work was gratifying, said Maj. Eric Fotheringham from the 492nd.

&#8220;We appreciate helping those guys on the ground, keeping them safe and looking out ahead for them,&#8221; Fotheringham said.

But after being away from his wife and two kids for the holidays, he now plans to kick back with his family and enjoy just being home, he said.