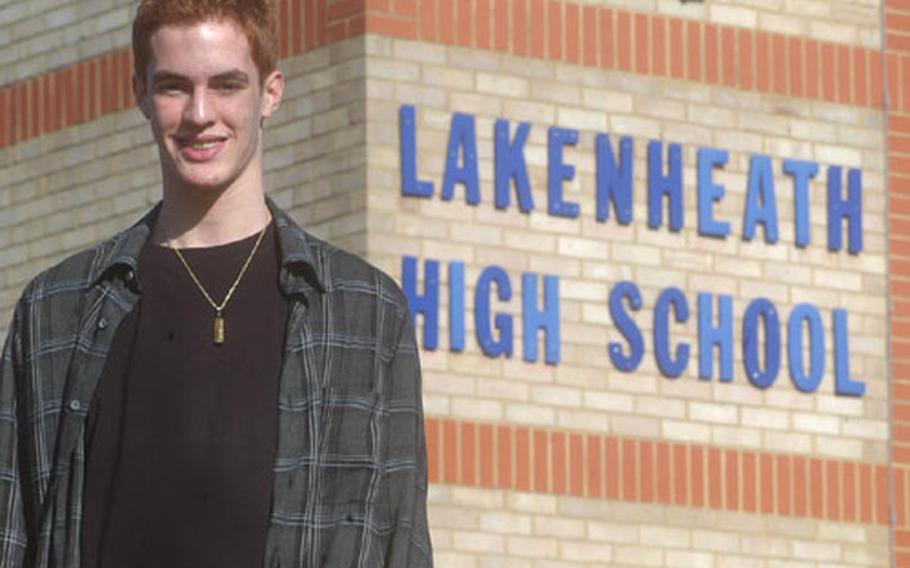 Mark Norsworthy, a junior at Lakenheath High School in England will attend the Research Science Institute at the Massachusetts Institute of Technology this summer. (Ron Jensen / S&S)

RAF LAKENHEATH, England &#8212; Mark Norsworthy, a junior at Lakenheath High School, will spend six weeks this summer at the Research Science Institute at the Massachusetts Institute of Technology.

That will be the longest period of time the 16-year-old born in Germany will have ever spent in America at one time, breaking his previous record of four weeks set when he was 6.

But, more importantly, the son of Chief Master Sgt. Michael and Karen Norsworthy will rub shoulders with distinguished scientists and researchers from prestigious universities.

He is one of three students chosen from Department of Defense Education Activity schools to join about 70 other high school students at the 21st edition of the institute. The other students are Christopher Palmer from Kubasaki High School on Okinawa and Christopher Reed from Quantico High School in Virginia.

In addition, three DODEA teachers have been selected to join the institute. They are Ivette Mojica-Martinez from Roosevelt Roads High School in Puerto Rico, Dawn M. Peterson from Zama High School in Japan and Julian A. Spain from Kubasaki.

The students will spend the bulk of their time working on particular projects, which will be chosen when they arrive. At the end, they will present their findings.

Norsworthy, who came to Lakenheath High School this year from Ramstein High School, Germany, when his father was transferred to RAF Mildenhall, is considering a career in aerospace engineering.

But it is the broader knowledge that science provides that attracts him.

John Fockler, the student&#8217;s counselor at Lakenheath, described Norsworthy as focused, self-motivated and driven, so his selection was not unexpected.

Norsworthy was born at Landstuhl Regional Medical Center in Germany and had lived all of his life around Ramstein Air Base before moving to England. His entire education, he said, has been at Department of Defense Dependents Schools, which he credits with giving him the opportunity to visit MIT this summer.