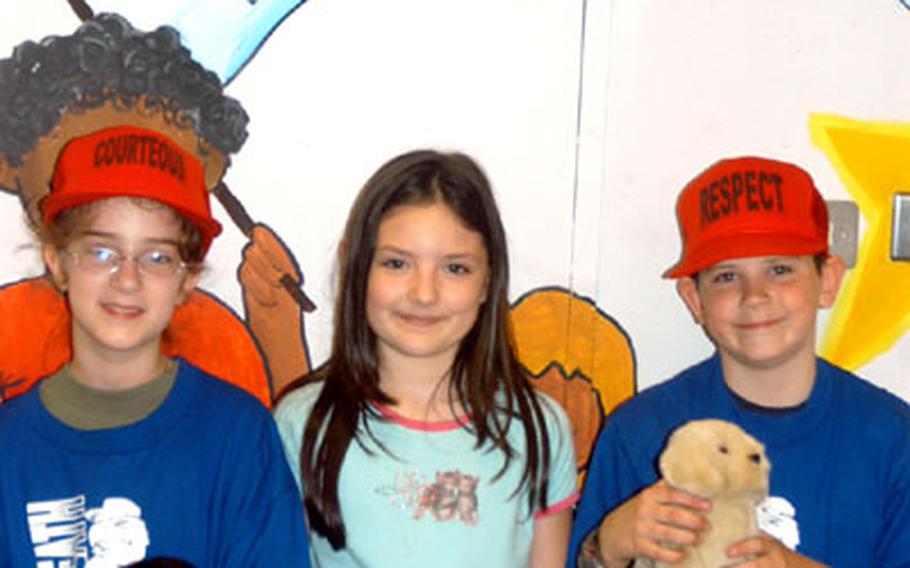 Lakenheath Elementary School on RAF Lakenheath, England, will hold a walk-a-thon Friday to raise money to train guide dogs for the blind and show off some of the dogs the children have helped train. From left, Sandra Rodriguez, 9, Cara Flannelly, 8, and Robbie McElroy, 8, are some of the pupils at the school who have helped raise enough money to train six guide dogs for the blind. (Ron Jensen / S&S)

RAF LAKENHEATH, England &#8212; Six blind people in the United Kingdom are being assisted in their daily lives by guide dogs paid for by the pupils at Lakenheath Elementary School.

Now in its fourth year, the schoolwide program has raised more than $30,000 for the Guide Dogs for the Blind Association. The money has been collected from bake sales, fund-raising events and simple donations.

Robbie McElroy, 8, a third-grader, did chores around his home, for example, and donated the money paid to him by his parents.

The project is part of the school&#8217;s ongoing We CARE program, which stands for We Care And Respect Everyone.

Individual classes do everything from visiting senior citizens centers to sending packages to deployed troops. The schoolwide program, however, is the effort to pay for the purchase and training of guide dogs at the association&#8217;s learning centers.

The main fund-raiser will be held at 9:30 a.m. Friday when several blind people and their dogs, including dogs sponsored by the students, will visit the school. Donations are being sought.

Throughout the program, blind people have visited the school several times to show the children the results of their efforts. They&#8217;ve had a lasting impact.

But, she said, when she watched the dog do its job, she became more comfortable.

She said life for a blind person would be hard without a guide dog.

Susan Philippe, who works at the association&#8217;s training center in London, said the children&#8217;s reaction is perfect.

She said it is important for children to have exposure to blind people so they learn they are normal people who should be able to live normal lives.

Anne Marks, the host-nation teacher and a moving force behind the program, said pupils come and go, but the effort to buy and train dogs is constant.

It is not likely to dim anytime soon. The walk-a-thon on Friday will help reinforce the good feeling for the children.