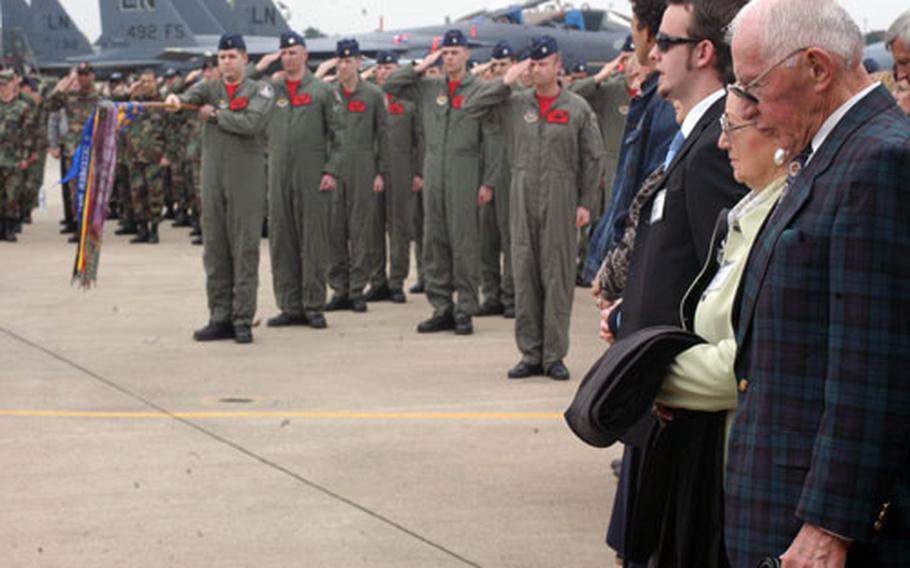 Members of Capt. Paul Lorence’s family — including his mother, Bernice Kruger, and son Peter Lorence, in sunglasses — stand during a moment of silence at a memorial ceremony to the downed pilot at RAF Lakenheath on Friday. Capt. Lorence was killed along with Maj. Fernando Ribas-Dominicci in April 1986 during U.S. airstrikes against Libya. (Ben Murray / S&S)

RAF LAKENHEATH, England &#8212; Scores of airmen from two generations gathered at RAF Lakenheath on Friday to commemorate two pilots killed 20 years ago during airstrikes against Libya.

In a roughly 40-minute ceremony attended by veterans of the air campaign, their family members and four current squadrons from the 48th Fighter Wing, Lakenheath officials rededicated a protective aircraft shelter to Maj. Fernando Ribas-Dominicci and Capt. Paul Lorence.

The men were killed in the early hours of April 15, 1986, while taking part in Operation El Dorado Canyon, the U.S. military response to terrorist acts sponsored by the north African nation.

The F-111F Aardvark flown by the Lakenheath pilots under the call sign Karma 52 was the only plane not to return from the strikes, directed at military and terrorist targets. The exact circumstances of their demise are not clear, but it is suspected they were hit by a surface-to-air missile fired by the Libyans.

Attending the ceremony were members of each man&#8217;s family, including Lorence&#8217;s mother, Bernice Kruger, who came from California for the event.

The last time she attended a ceremony for her son at Lakenheath, just after his death, the feelings were much more raw, she said. The memorial was held in a heavy rain.

For retired Air Force colonel Ronald Kurjanowicz, who knew the fallen pilots and helped plan the 1986 attack, Friday was the first time at the base since he left 20 years ago.

The size of the ceremony for his friends, which also included the unveiling of a public bench bearing their names, was a good example of the ethos of the Fighter Wing, he said.

To all but halt operations for an afternoon to remember two pilots killed in action 20 years ago showed the depth of respect the unit holds for its members, he said.