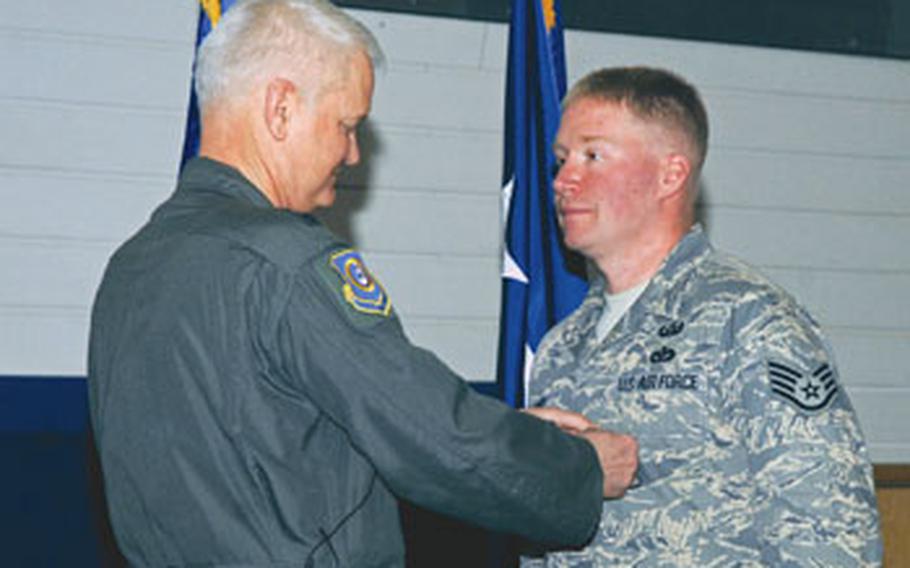 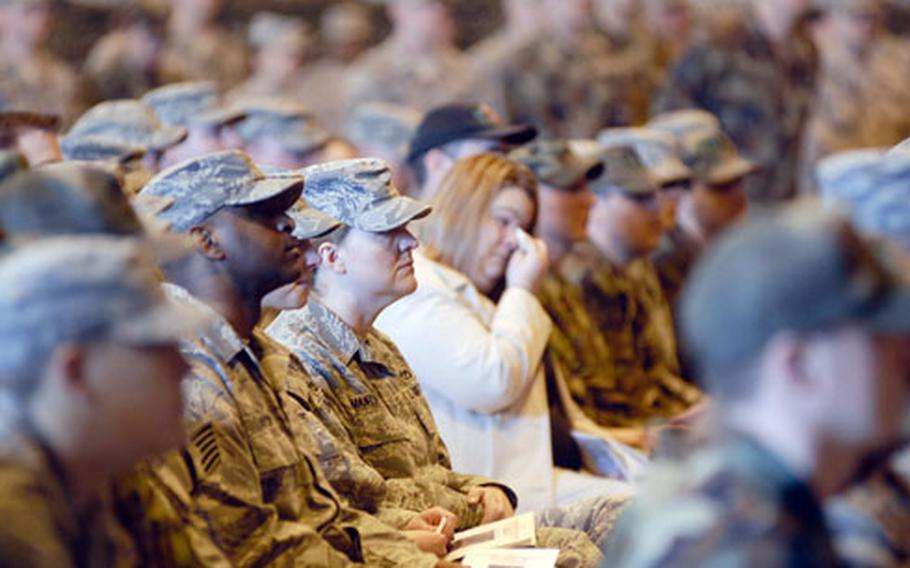 Hundreds of troops and civilians attend a memorial service at RAF Lakenheath for Staff Sgt. Phillip Myers, who was killed in Afghanistan. (Charlie Reed/Stars and Stripes) 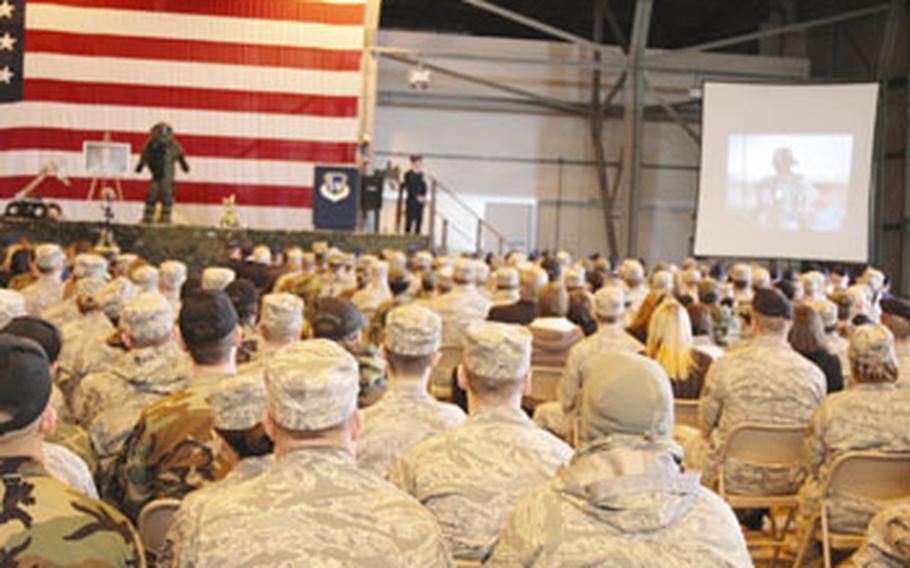 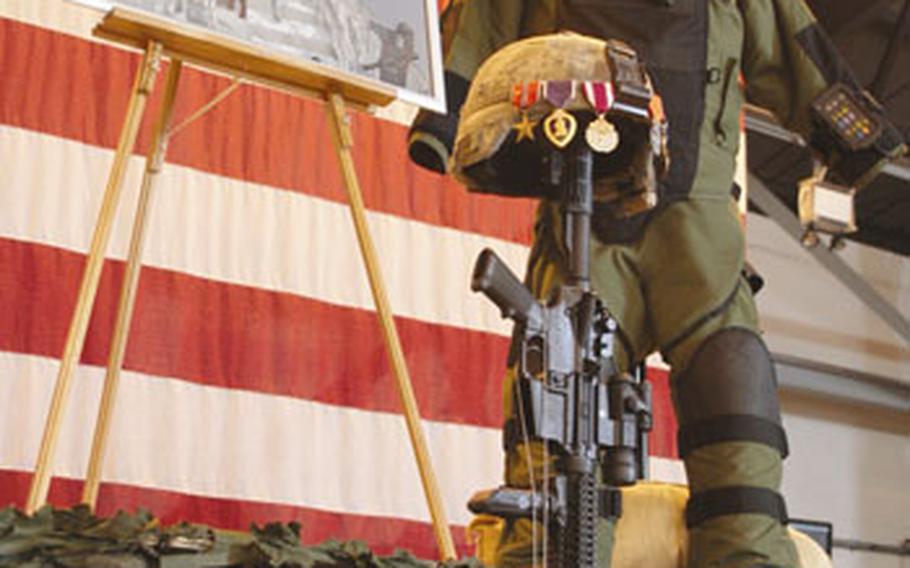 A tribute to Staff Sgt. Phillip Myers, including his boots, dog tags, rifle, helmet and other equipment used by the explosive ordnance specialist, was at the center of a memorial ceremony Thursday. Myers, from the 48th Civil Engineering Squadron at RAF Lakenheath, was killed by a roadside bomb in Afghanistan. The 30-year-old father of two was only the second airman from RAF Lakenheath to be killed while serving in Iraq or Afghanistan. (Charlie Reed/Stars and Stripes) 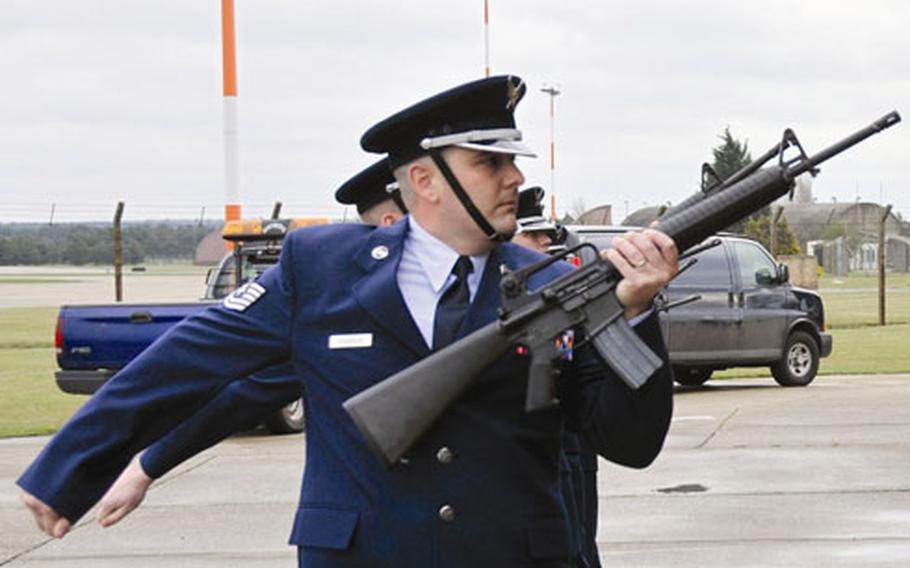 Members of the 48th Fighter Wing base honor guard perform a three-volley salute during the ceremony. (Perry Aston/Courtesy of the U.S. Air Force)

As airmen at RAF Lakenheath mourned Staff Sgt. Phillip Myers last week, several base services lent them their support by giving them a shoulder to cry on if needed and a place to turn to for help in the grieving process.

One base official described the feeling at Lakenheath as somber. Myers&#8217; death on April 4 in Afghanistan was only the second time a Lakenheath-based airman made the ultimate sacrifice in the wars in Iraq and Afghanistan.

"There is a lot of support. We all have been offered support," said Airman 1st Class Christopher Townsend, who served with Myers in the 48th Civil Engineer Squadron Explosive Ordnance Disposal Flight.

Townsend said he dealt with the loss by turning to others within his unit who knew Myers as well as he did.

He described the staff sergeant as someone who was more than just a supervisor and noncommissioned officer to members of the 48th. Myers was Townsend&#8217;s sponsor when he arrived in England in March 2008 and someone who welcomed Townsend into his home for dinner when he landed in the United Kingdom.

Townsend said that if he felt the need to talk about Myers&#8217; death to someone outside his unit, he could turn to the chaplain&#8217;s office.

Maj. Timothy Moermond, a chaplain at RAF Lakenheath, said the base chaplains are part of the team that notifies the family about the loss of an airman. Chaplains are there to help the family and anyone who needs support, he added.

Providing support throughout the base means checking up on individual units and coordinating with other services that could help airmen or loved ones, Moermond said.

Psychological health experts with the 48th Medical Group are another option that airmen and families can use.

"For any loss, generally speaking, we have individual counseling," said Maj. Dawn Kessler-Walker, director of the 48th Medical Group&#8217;s psychological health. "Some of it is just talking, letting them talk about their feelings and letting them know what they can expect (in the grieving process). You cannot really put a timetable on how long it takes for someone to get over the loss of a friend or loved one."

Another part of counseling could be helping people deal with depression for prolonged periods and anxiety because of a death, she added.

The Office of Mortuary Affairs also provides support to families who have lost a loved one.

The wing commander appoints a family liaison officer to help the family within 24 hours of the death. The FLO helps arrange for transportation for the family to the servicemember&#8217;s final resting place and to anywhere else they need to go because of the death, said Tech. Sgt. Meloney Natal, a mortuary affairs spokeswoman. The FLO also helps the family get in touch with whatever other support services they need to cope with the loss.

"We want to make sure they are well taken care of," Natal said.

A lot of people have been providing support to the airmen and Myers&#8217; family, said Capt. Patrick Kucera, the unit&#8217;s flight commander.

Spouses of Myers&#8217; brothers-in-arms have provided the family with food when needed and helped the family around their house, Kucera said. A memorial fund has also been established.