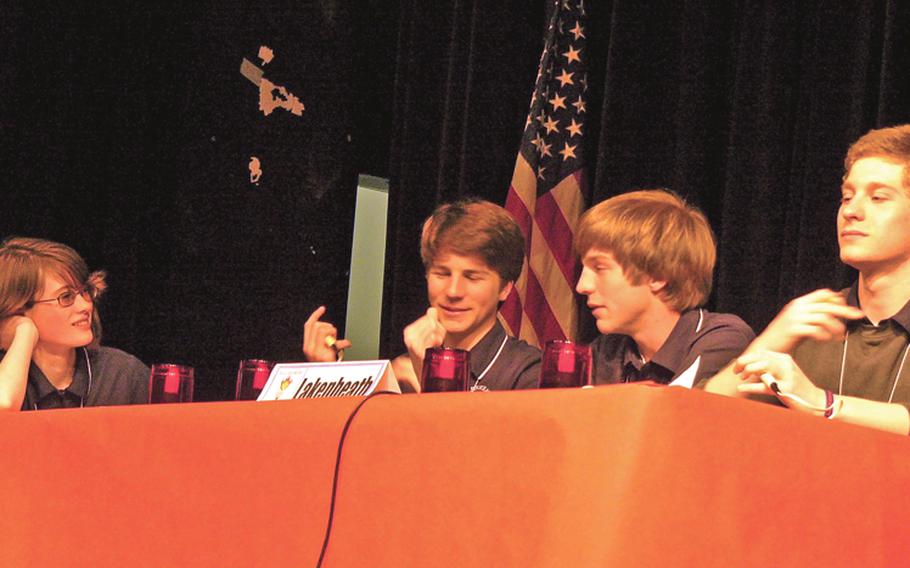 BAUMHOLDER, Germany &mdash; It took an All-Europe Academic Bowl version of the 2000 Florida presidential election recount to finalize the results Wednesday, but when all the rulings were made, Lakenheath had completed an unbeaten run through the winner&rsquo;s bracket of this annual event with a 40-30 runoff victory over defending champion Ramstein.

Lakenheath&rsquo;s team of Joe Sullivan, captain; Ryan McDonnell, a senior, and his brother, Colin, a junior; and sophomore Haley Outlaw appeared to have won outright at the end of the 40-question regulation final, 130-125, by answering the last 10-point question as time expired.

But the event&rsquo;s challenge committee upheld Ramstein&rsquo;s protest of 10 points awarded for a correct Lakenheath answer given after time had expired in the first half, deducted the points, and determined the final score to be 125-120 in Ramstein&rsquo;s favor.

That outcome appeared to force a final match to determine the 2011 champion of the double-elimination tournament. But there was one more twist: Academic Bowl rules decree that a championship victory or defeat cannot be awarded on a challenge ruling. Instead, scores were returned to zero, and a 10-question runoff was implemented to determine the winner.

Colin McDonnell quickly answered the first two 10-point runoff questions, correctly placing some literary dialogue as coming from the novel &ldquo;The Da Vinci Code,&rdquo; and identifying the Freemasons as the society to which George Washington once belonged.

After a correct Ramstein answer to a mathematical question, Colin McDonnell struck again, and Ramstein was unable to catch up.

&ldquo;It was pretty much fun,&rdquo; the younger McDonnell said. &ldquo;It was much more intense than I expected.&rdquo;

The quick start in the runoff was vital, said Sullivan, a senior All-Europe soccer player and only Lancer to take part in this event last year. &ldquo;This competition is very confidence-sensitive,&rdquo; he said, adding that his own confidence might owe something to an athlete&rsquo;s superstition.

&ldquo;We have team shirts,&rdquo; he said, pulling at the sleeve of his plain gray T-shirt, &ldquo;but I wore this shirt because I had it on when we won yesterday. I didn&rsquo;t want to change the environment.&rdquo;

The title game came just two hours after Lakenheath had defeated Ramstein 115-100 in the winners-bracket final.

Despite its two close losses Wednesday, Ramstein can take solace in the selection of two members of its team, juniors Forrest Kamperman and Pat O&rsquo;Neal, as the tournament&rsquo;s MVPs.

It also had the satisfaction of defeating neighborhood rival Kaiserslautern 155-90 in the losers-bracket final to earn its second shot of the day at the eventual champs and consign Kaiserslautern to third.

Brussels, one of the smallest schools in Department of Defense Dependents Schools-Europe, finished fourth.