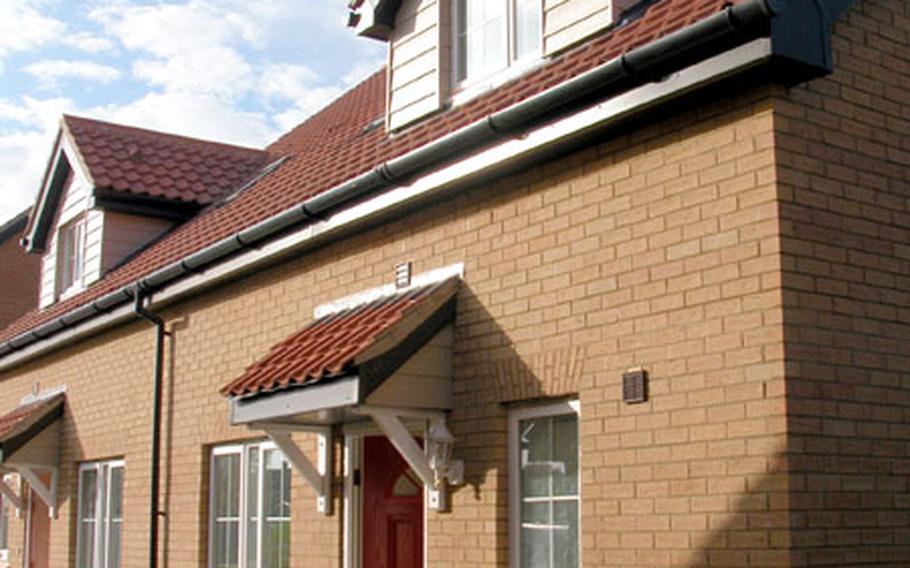 Come Dec. 1, 27 new housing units will be handed over to Air Force families in the new development near Lakenheath’s Gate 2. (Geoff Ziezulewicz / S&S)

All that amorphous, distended construction near Gate 2 on RAF Lakenheath is finally starting to resemble something. Like wild mushrooms throughout the East Anglian countryside, new houses are sprouting up amid the scaffolding, mud and dump trucks.

And soon a number of Lakenheath families will be the first to step into the homes, when 27 of the units are handed over to housing authorities on Dec. 1.

This week, some Air Force families will learn that they will be the first occupants of the new houses, said Bart Bloemhard, housing director for the East Anglia region.

In fact, a few are already aware that they&#8217;ll be moving in to their new homes, he said.

The Liberty Village project is a more than five year, approximately $200 million initiative to replace 606 aging units at Lakenheath with new homes that will be laid out like a traditional neighborhood, with walking paths and parks sprinkled throughout.

The project involves moving airmen and their families out of existing houses in phases, so that those houses can be demolished, Bloemhard said.

The process of deciding who will stay and who will go has been a balancing act of sorts, he said, one that is predicated on a variety of factors.

Planners have taken into account permanent change of station dates, attrition and needs of the families, such as proximity to schooling, when deciding where to move people, Bloemhard said.

About 50 percent to 60 percent of those moved out of the old houses that were demolished as part of phase one were moved as part of natural attrition, he said.

Those who will have dibs on the new homes that are about to be turned over will include families displaced by demolition of old homes in phase two of the project, he said. Phase two demolition is expected to begin in the coming months. Those who were moved as part of phase one demolition also will have priority with the new homes.

The new units will feature more square footage than existing homes, as well as garages and better soundproofing and energy efficiency.

While the new homes are being handed over to housing officials on Dec.1, they still need to be inspected, and Bloemhard said actual move-ins might not take place until after the holidays.