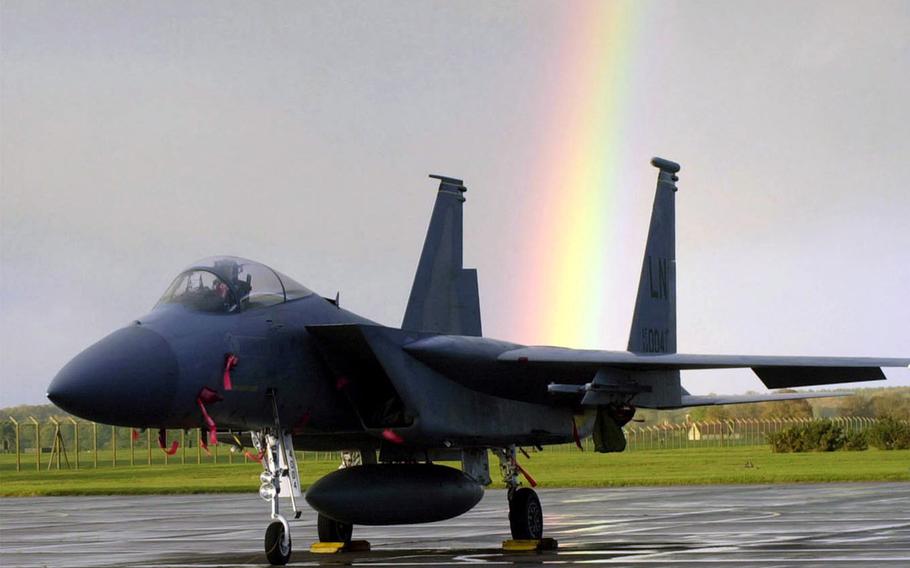 In a 2001 file photo, a rainbow stretches over an F-15C Eagle aircraft from the 493rd Fighter Squadron, 48th Fighter Wing, on the tarmac at RAF Lakenheath. (James L. Harper Jr./U.S. Air Force)

KAISERSLAUTERN, Germany — The 48th Fighter Wing at RAF Lakenheath in England has won U.S. Air Forces in Europe–Air Forces Africa’s second annual Innovation Madness contest, beating out seven other wings that vied for a portion of $250,000 in cash prizes for their smart ideas.

The wing won $175,000 for innovations that yielded the highest per capita cost savings in the command, USAFE-AFAFRICA said. Spangdahlem in Germany was runner-up, earning $50,000.

The winning wings can use the money for unfunded requests from their “wish-lists” of projects, officials said.

The 48th in its video posted to social media for the contest boasted of saving 38,000 man hours and $7.6 million during the past year.

The wing was credited for the single innovation that saved the most money, an accomplishment that also earned it $6,000 in a separate prize category. Two years ago, the wing’s civilian engineer squadron found that to challenge contractors on their construction and design decisions would require hiring a consultant. Airmen were trained and given the proper equipment to be able to hold contractors accountable for substandard performance and workmanship, saving $3.3 million in consultant fees.

Other Lakenheath innovations included launching the only sleep study in USAFE, thus eliminating costs for a civilian-led sleep study, and developing an in-house therapy dog program for sexual assault victims.

Lakenheath took three out of the six prizes in the contest, winning for the most Facebook feedback: Its contest video was viewed 75,000 times and had 7,700 reactions throughout the three-week competition.

All USAFE-AFAFRICA wings submitted a total of 378 innovations, many of which can be used by various units around the command or even the Air Force, the command said. This year’s innovations added up to $15 million in monetary benefits and 174,000 hours of labor saved.

USAFE-AFAFRICA validates the financial benefits and time savings submitted by each wing for the contest, officials said.

“But the important thing to remember is that these numbers were earned by creating a culture of innovative thinkers who identified and captured ways to operate cheaper, better, faster throughout the year,” he said in a statement.