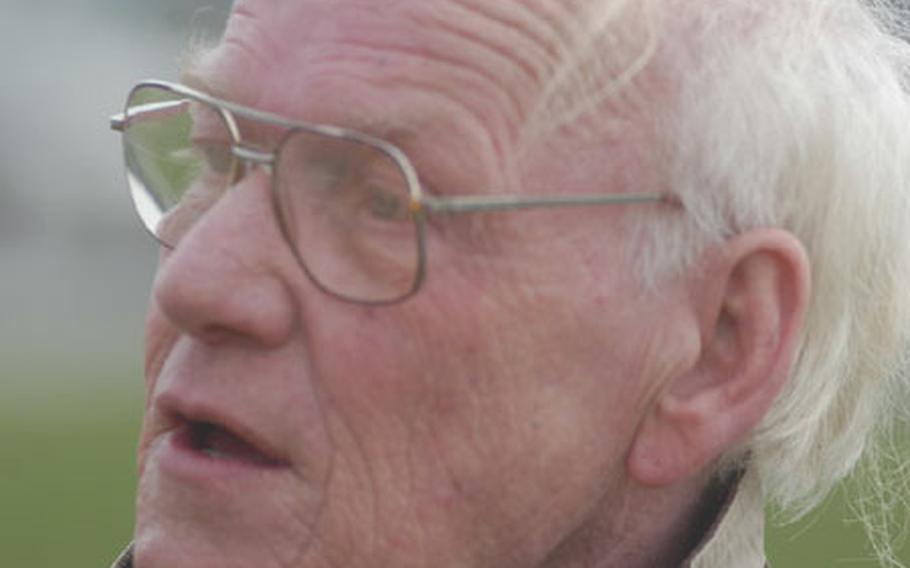 Cyril Brown has stood a vigil outside RAF Lakenheath, England, since 1987 to protest the U.S. attack on Libya on April 14, 1986. Some of the aircraft involved flew from the base near Brown&#39;s home in eastern England. (Ron Jensen / S&S)

To make his point, Brown, 65, has stood a vigil every year on the anniversary of the attack outside RAF Lakenheath, England, which sent 24 F-111s on the operation.

&#8220;At the time, we thought it was such an act of terrorism,&#8221; said Brown, who stood Wednesday afternoon with a knot of friends for three hours outside the main gate. &#8220;It was done with the collusion of the (Margaret) Thatcher government.

U.S. Air Force and Navy jets attacked targets in Libya, including Tripoli, in the early morning of April 15, 1986. Aircraft from RAF Lakenheath, which left the base on April 14, were required to fly around the European continent because countries would not allow their airspace to be used.

The attack, dubbed Operation El Dorado Canyon, was in retaliation for the bombing of a disco in West Berlin 10 days earlier that killed two American soldiers and a Turkish woman and injured dozens of other patrons.

America blamed Libyan agents for planting the bomb, although there always has remained some doubt.

The attack, which included planes from the Sixth Fleet, struck several targets.

Although Libyan leader Moammar Gadhafi&#8217;s house was a target, he escaped unharmed. His adopted daughter was killed and two sons injured. Up to 30 civilians were killed.

The next day, about 200 people protesting the attack arrived at the main gate of RAF Lakenheath. And the following year, Brown began his annual vigil.

He has sometimes had up to 70 or 80 people sharing the vigil, although only four friends showed up Wednesday.

Davida Higgin was one of them.

She said the vigil continues in hopes such attacks aren&#8217;t repeated.

A hand-printed sign placed at the site of the vigil paid tribute to Rafaat el Chossein, who was killed by the American bombs.

The base has no problem with Brown&#8217;s annual protest, said 1st Lt. Ed Ekpoudom, a spokesman for the 48th Fighter Wing.