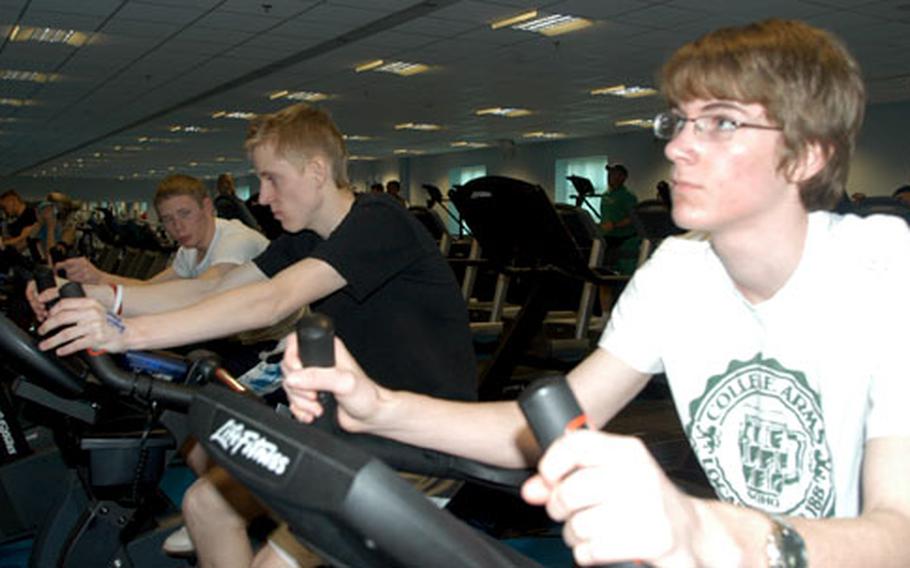 RAF LAKENHEATH &#8212; Want an edge in the Donkey Kong tournament or a sharper mind for the Sudoku championships? Try some caffeine for a quicker Kong and a lot of water for a flexible intellect.

Matt Miller and Greg Billington recently won first and second place, respectively, at the 32nd annual Junior Science and Humanities Symposium for the region. The event was held last month at Patrick Henry Village Pavilion in Heidelberg, Germany, and brought together 115 DODDS students from 20 schools.

The two juniors claimed the top spots with experiments that measured the impact of everyday substances on the human body.

Miller, who claimed a $2,000 scholarship for what he described as a &#8220;really simple little project,&#8221; found inspiration in video games.

His experiment focused on eight participants who conducted a series of reaction-time tests both before and after chewing caffeine-charged gum.

Miller found that the presence of caffeine cuts reaction time, just as he had hypothesized.

Billington, meanwhile, merged a well-respected fact that hydration affects athletic performance with questions about the brain&#8217;s need for liquid.

Under a more rigid set of scientific parameters than Miller&#8217;s human experiment, Billington had five males between the age of 16 and 19 abstain from any caffeine, carbonates and alcoholic beverages during a 24-hour period prior to the athletic portion of the experiment.

The participants then took a Stroop test, an exam designed by neurophysiologist John Ridley Stroop in 1935 to provide insight into cognitive effects that are experienced as a result of attentional fatigue.

His experiment impressed the judges to the tune of second place, which includes a $1,500 scholarship. As juniors, the students have plenty of time to decide where they will use their scholarships.

They also earned their science mentor, Lakenheath science teacher Darryl Brock, a summer trip to Albuquerque, N.M., where he will join the two students at the national Junior Science and Humanities Symposium this June.