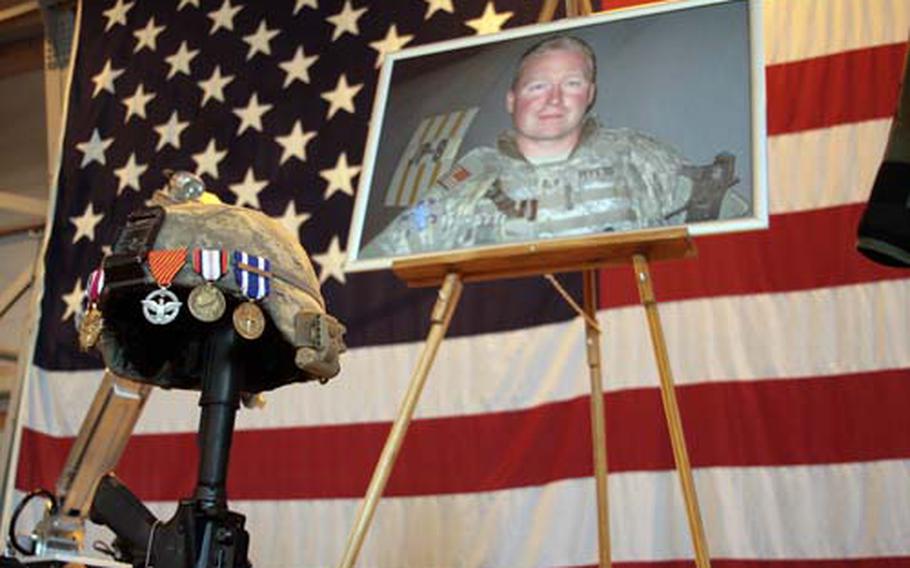 A tribute to Tech. Sgt. Phillip Myers, including his boots, dog tags, rifle, helmet and other equipment used by the explosive ordnance specialist, was at the center of a memorial ceremony Thursday. Myers, from the 48th Civil Engineering Squadron at RAF Lakenheath, was killed by a roadside bomb Saturday in Afghanistan. The 30-year-old father of two is only the second airman from RAFs Lakenheath and Mildenhall who has been killed while serving in Iraq or Afghanistan. (Charlie Reed / S&S)

RAF LAKENHEATH, England &#8212; A family man who loved his work and was "loved and admired by everyone" is how those who knew Staff Sgt. Phillip Myers described him Thursday.

Myers&#8217; family, friends and fellow airmen came together to say their goodbyes to him during a memorial service in RAF Lakenheath&#8217;s hangar 6. The 10-year Air Force veteran was killed Saturday by a roadside bomb in Afghanistan&#8217;s Helmand province. The 30-year-old airman is survived by his wife, Aimee, a son and a daughter, his parents and his brother.

A standing-room-only crowd filled the hangar as the ceremony began with an honor guard made up of airmen from Myers&#8217; unit, the 48th Civil Engineering Squadron Explosive Ordnance Disposal Flight. A photo of him, with a big American flag draped behind it, was flanked by an EOD bomb suit and a robot the unit uses to examine explosive devices.

Set up in front of the stage was an M-4 rifle nestled between a pair of boots with a helmet perched atop the weapon. Myers&#8217; dog tags dangled from the firearm. Six medals &#8212; some of the many honors Myers received for his service &#8212; hung from the helmet.

The base&#8217;s top officers spoke about Myers&#8217; excellent service record. He was awarded the Bronze Star Medal with valor, Purple Heart and Meritorious Service Medal posthumously and also was promoted to technical sergeant during the service.

Silveria said he had selected Myers for promotion to technical sergeant because of his excellent service record. The colonel noted that Myers had most recently helped clear explosive devices from 9,400 kilometers of land downrange.

"This decision (to promote Myers) was made well before he departed on his last mission on the 4th of April," Silveria said.

Myers&#8217; family members gave the military permission to allow the media to document the return of the fallen airman&#8217;s flag-draped casket at a ceremony Sunday night in Dover, Del. The coverage was the first since the Pentagon lifted its 18-year ban on the media covering the return of fallen servicemembers.

At the ceremony at Lakenheath, those who knew him best &#8212; his friends and fellow servicemembers in the tight-knit EOD flight &#8212; told the crowd what they lost.

"Phil was not one for pomp and circumstance, but I believe we must honor him and not forget his sacrifice," said Tech. Sgt. Christopher Pearce.

Pearce said the best way to describe Myers was he was outgoing, a joker and "bad ass."

Airman 1st Class Jason Jeffers, who talked with Stars and Stripes as the flight prepared Wednesday for the service, called Myers "a hard-working person" who was motivated to teach EOD to his fellow airmen.

"He would give the shirt off his back [for others]."

Myers was the sponsor for Airman 1st Class Christopher Townsend when Townsend arrived in England.