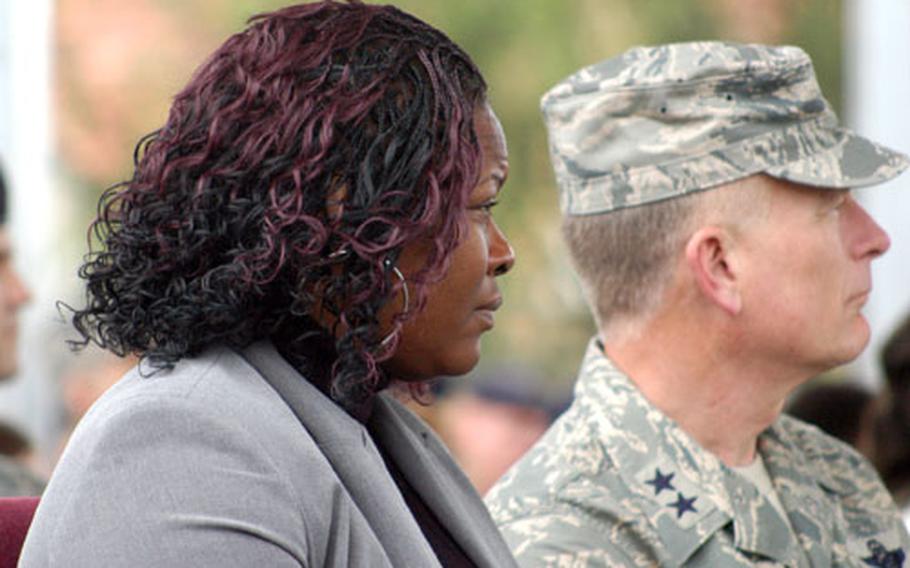 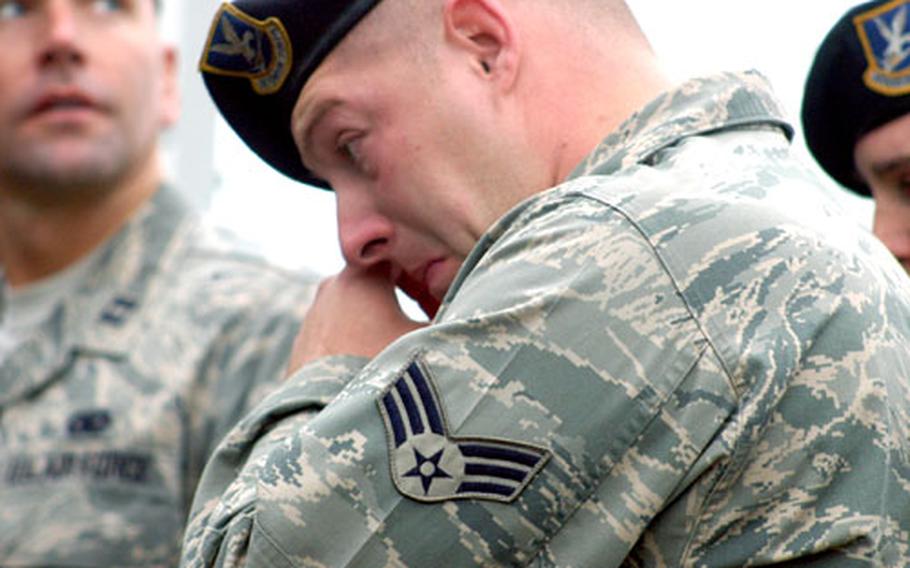 Senior Airman Derek McCaghren, of RAF Lakenheath&#39;s 48th Security Forces Squadron, fights back tears during a ceremony Sunday honoring the passing of Senior Airman Jason D. Nathan. McCaghren was one of the airmen deployed with Nathan at the time of his death. (Geoff Ziezulewicz / S&S) 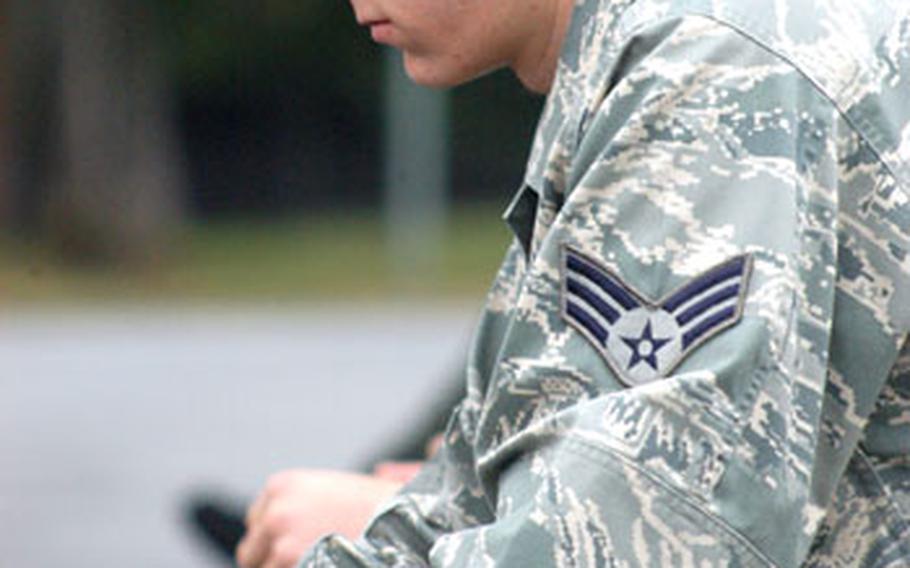 Senior Airman Albert Seidenstucker of RAF Lakenheath&#39;s 48th Security Forces Squadron listens during Sunday&#39;s ceremony. Seidenstucker was deployed with him, and the two were good buddies. "We were like brothers," Seidenstucker said. (Geoff Ziezulewicz / S&S) 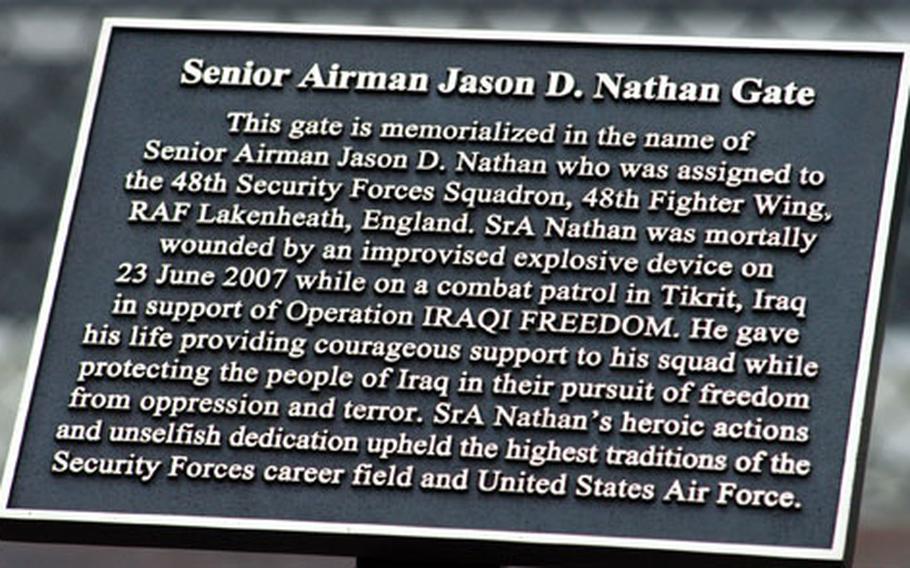 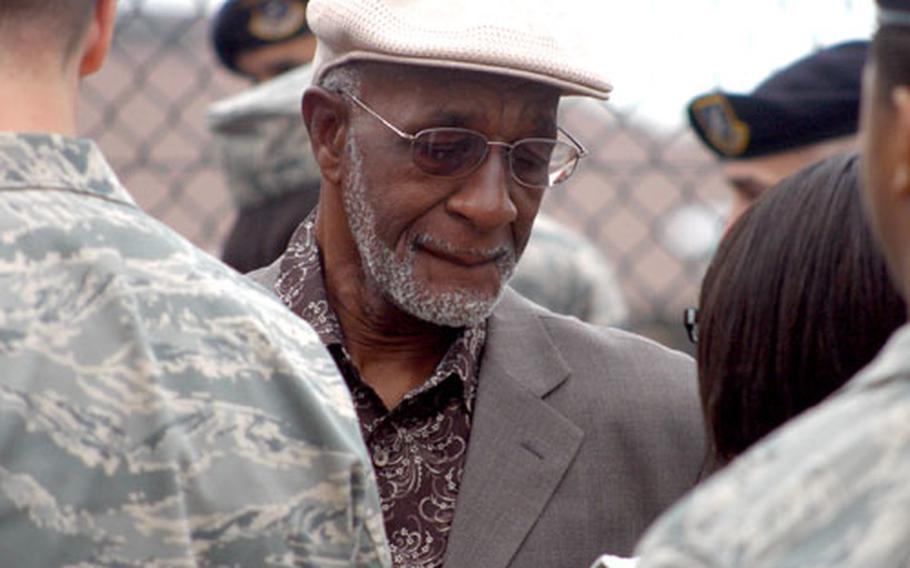 RAF LAKENHEATH &#8212; After Senior Airman Jason D. Nathan&#8217;s convoy was hit by a roadside bomb June 23 in Tikrit, Iraq, his buddies and fellow 48th Security Forces Squadron members rushed to the combat hospital, hoping the comrade they knew as "Nate" would pull through.

But like thousands of other Americans serving their country, he didn&#8217;t make it.

And for those who knew him and worked with him, the pain of his passing is still raw.

As the one-year anniversary of Nathan&#8217;s death approaches, friends, family and 48th Fighter Wing airmen gathered at RAF Lakenheath on Sunday to dedicate a new entry gate in his name.

Nathan&#8217;s aptitude was apparent to anyone who met him, Henson said. Right out of the gate, he scored 90 percent on his first security forces certification test, no small feat.

In turn, he helped other airmen pass their certifications while volunteering his free time around base, Henson said of the 22-year-old.

Nathan was promoted to senior airman a day before his death.

"He never knew about his early promotion," he said.

Nathan, originally of Macon, Ga., has been the only airman with the 48th Fighter Wing to die in the Iraq war.

In a war full of difficult stretches, last June was a particularly rough time to be deployed to Iraq, said Senior Master Sgt. Killjan Anderson, who deployed with Nathan and a handful of other 48th SFS airmen.

Rolling out of FOB Speicher and operating in and around Tikrit was "difficult at best," Anderson told the assembled crowd, which included Nathan&#8217;s mom, sister and grandfather.

The surge was just under way in Baghdad, and there was a movement of people that gave the troops pause and made their job training Iraqi police that much more difficult, Anderson said.

"You could feel the growing passive and active support for the insurgency," he said.

As with other troops on the ground in hot spots, there was an understood acceptance of the danger, Anderson said.

The mission on June 23 was a sobering one and fraught with danger, Anderson said. Nathan was a turret gunner in one of the convoy vehicles.

But like any good turret man, Nathan is still watching over everyone a year later, Anderson said, choking up as he finished his words.

Slowly the 48th SFS is going from grieving to healing, he said.

Though it&#8217;s been nearly a year since his passing, the event Sunday seemed to strike Nathan&#8217;s family and SFS comrades particularly hard.

Seidenstucker met Nathan at Lackland Air Force Base, Texas, a few years ago. Both got their first assignments at Lakenheath, about a year before Nathan was killed.

Once downrange, the two were inseparable. They ate, worked out and watched movies together when not outside the wire.

"We were like brothers," said Seidenstucker, who described his buddy Nathan as a prankster who was always reading the Bible.

The loss of his friend and dealing with the grief is an ongoing thing, Seidenstucker said, "something I&#8217;m going to have to deal with my whole life."

"It&#8217;s probably been the most depressing time of my life," he said of losing his friend. "I would picture him in front of me, then he would disappear."

See a slideshow of the dedication ceremony here.