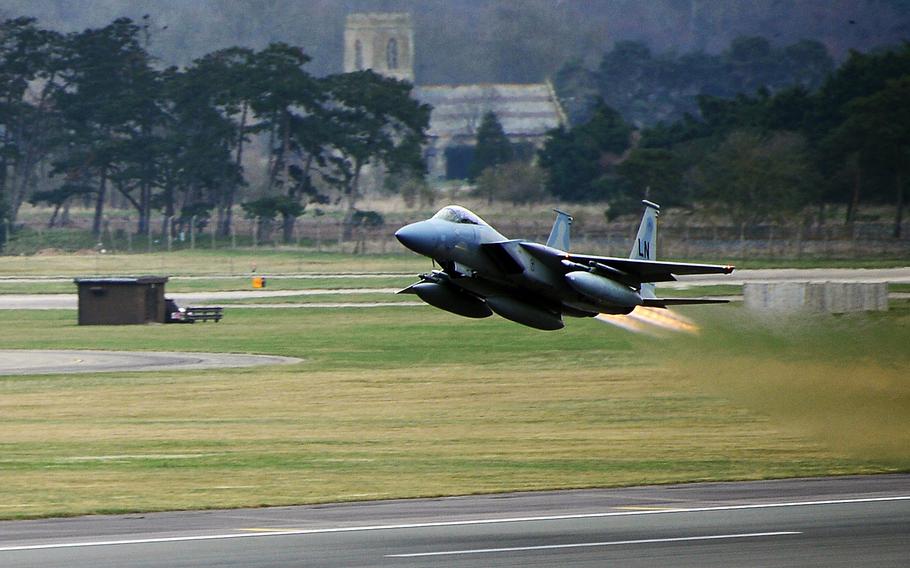 An F-15C Eagle from the 493rd Fighter Squadron takes off from RAF Lakenheath , England, Thursday. The 48th Fighter Wing is sending additional aircraft and personnel to support NATO's air policing mission in Lithuania, at the request of U.S. allies in the Baltics. (Emerson Nunez/U.S. Air Force)

An F-15C Eagle from the 493rd Fighter Squadron takes off from RAF Lakenheath , England, Thursday. The 48th Fighter Wing is sending additional aircraft and personnel to support NATO's air policing mission in Lithuania, at the request of U.S. allies in the Baltics. (Emerson Nunez/U.S. Air Force) A U.S. Air Force F-15 from RAF Lakenheath flies skies above Europe after refueling from a KC-135R Stratotanker. (Michael Abrams/Stars and Stripes) Ground crews perform engine checks on an F-15C Eagle from RAF Lakenheath, England, at the flightline on Siauliai Air Base, Lithuania, on Jan. 4, 2014. Lakenheath has deployed an additional six Eagles at the request of Baltic allies. (Nigel Sandridge/U.S. Air Force) 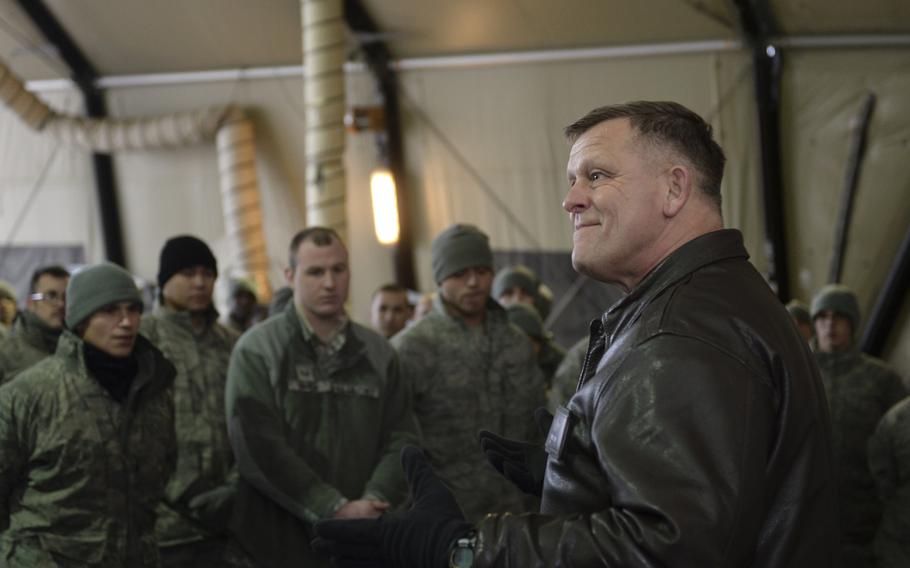 Gen. Frank Gorenc, U.S. Air Forces in Europe-Africa, commander addresses airmen from the 48th Air Expeditionary Group out of RAF Lakenheath, England, during a visit to a Siauliai Air Base, Lithuania, on Friday, Jan. 3, 2014. Gorenc's visit coincided with a ceremony marking the airmen assuming control of the Baltic Air Policing mission from the Belgians. (Nigel Sandridge/U.S. Air Force)

KAISERSLAUTERN, Germany — Six F-15C Eagles and more than 60 U.S. airmen from RAF Lakenheath, England, were en route Thursday to Lithuania to bolster NATO’s air policing mission over the Baltics region amid the crisis in nearby Ukraine.

The Associated Press later reported that the fighter jets had arrived at Siauliai air base, Lithuania.

U.S. Air Force officials with the 48th Fighter Wing at Lakenheath, and at U.S. Air Forces in Europe headquarters at Ramstein Air Base said Thursday morning that the additional fighter jets and military personnel were on their way to Siauliai. The Pentagon announced late Wednesday that the U.S. military planned to augment its current Baltics air policing mission.

The action “comes at the request of our Baltic allies,” said USAFE spokeswoman Capt. Reba Good. “We’re committed to our NATO allies. We’ll continue to support them.”

Lacking the capabilities to police their airspace, the Baltic nations have relied on their NATO allies, which send fighter jets and crews on a rotational basis to perform the mission. For the past 10 years, the United States has shared the task of protecting Baltic airspace with several other NATO countries, including Great Britain, France, Germany, Belgium, Italy and Spain.

The 48th Air Expeditionary Group out of Lakenheath has been deployed to Lithuania in support of the mission since early January, when it replaced a Belgian unit. That mission is still scheduled to end as planned in early May, Good said. The Polish military will assume the next rotation.

The contingent includes pilots, engineers, medical personnel, support groups and communications personnel. The Air Force declined to provide the number of servicemembers because of security reasons.

Though the beefed-up U.S. contingent headed to the Baltics more than doubles the number of U.S. warplanes currently patrolling the skies over the former Soviet republics of Lithuania, Estonia and Latvia, a senior NATO diplomat said Thursday, “this is essentially a symbolic action.”

“It’s a demonstration meant to reassure those allies of the American presence and commitment,” said the envoy, who spoke on usual condition of anonymity.

The U.S. Air Force in November 2012 stood up a small aviation detachment, marking the first enduring presence of U.S. military members on Polish soil. Unaccompanied Air Force personnel are assigned to the unit, which hosts periodic rotations of U.S. F-16 fighter jets and C-130 cargo and personnel transport aircraft that deploy to Poland for joint training.

Good said there are currently 10 airmen working at the aviation detachment. No U.S. aircraft are deployed there at the moment, she said.

Next up in the rotation are three C-130s and about 100 personnel from Ramstein, scheduled to arrive in early April, Good said, but given Hagel’s remarks, this could change. They will be located at Powidz air base in Poland.

“I think it’s clear ... that the events of the past week underscore the need for America’s continued global engagement and leadership,” Hagel said in testimony before the Senate Armed Services Committee.

Although Air Force officials in Europe wouldn’t draw a connection between the Ukraine crisis and the extra jets sent to the Baltics, Lithuanian’s defense minister said the move was in response to Russia’s “aggression in Ukraine and its amplified military activity in the Kaliningrad region,” the Baltic News Service reported.

Meanwhile Lithuanian President Dalia Grybauskaite warned Thursday, during a meeting in Brussels of the European Council, that Russia was trying to redraw its post-Cold War map and borders. “So, first it’s Ukraine, Moldova will be next and, finally, it can reach the Baltic states,” she told journalists in Brussels, according to the Baltic News Service.

Stars and Stripes’ Slobodan Lekic contributed to this story.