Lakenheath fence to push homes off base 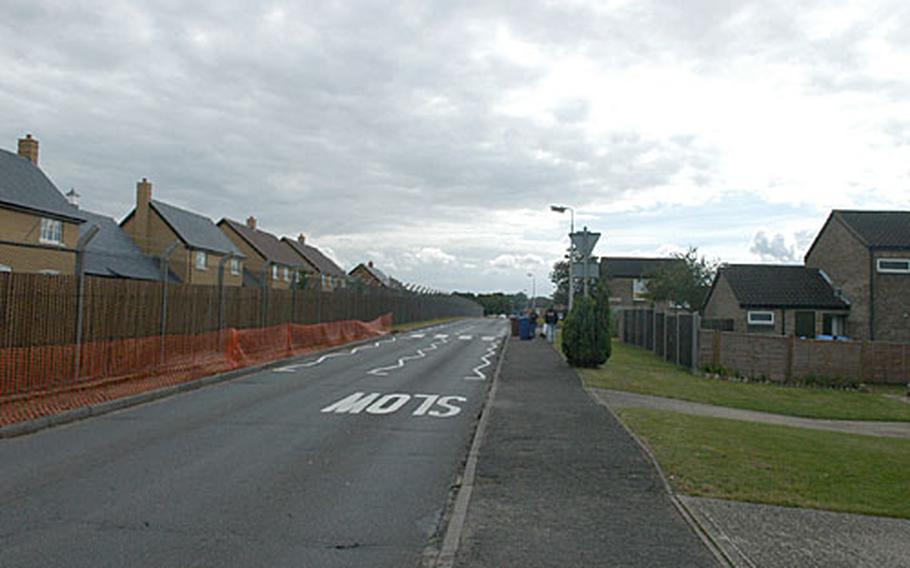 A view looking south along Radcliffe Road on RAF Lakenheath. New base boundaries mean that the units on the right, leased by the Air Force, will be off-base next year, while the new Liberty Village development houses on the left will be inside the new fence. (Geoff Ziezulewicz / S&S)

RAF LAKENHEATH, England &#8212; A plan under way to move a checkpoint and security fence at the home of the 48th Fighter Wing will result in nearly 600 base houses becoming off-base dwellings next year.

Lakenheath&#8217;s Gate 2 is now at a traffic circle on land rented by the military since the post-9/11 security changes. But the lease for the parcel will expire by the end of the year, prompting the $1.4 million gate project, according to base officials.

Moving the gate east along Lords Walk and plans for a new perimeter fence along Radcliffe Road means the 570 homes leased by the Air Force west of Radcliffe will be excluded from the new base configuration and become accessible to the public.

The project began last month and is slated for completion by spring 2008, according to 48th Civil Engineering Squadron commander Lt. Col. Brian Murphy.

&#8220;When the gates move up, they will be technically off-base,&#8221; RAF Lakenheath engineering project manager Robert Butcher said of the 570 affected homes.

Before the gates&#8217; move, residents drove through the old checkpoint to get to their house. Various concrete barriers blocked entry points to the housing area from off base. They also will be removed.

The affected units are mainly home to junior enlisted airmen and their families.

The Air Force has leased the properties for more than 30 years through various owners.

Starting in 2008, 100-unit blocks of homes in the affected area will have their leases up for review each year, Murphy said.

The new base boundaries and the gate are two separate projects that work as one, Butcher said.

When complete, the portion of the Lords Walk road leading up to the new gate will be accessible to the public, as will Radcliffe Road and the homes that lie to the west of it. Roads currently blocked to the west of the affected homes will also reopen.

Elveden Estates has received $10,000 a year for the land where Gate 2 now sits, according to Butcher.

Elveden Estates did not return repeated calls for comment Friday.

Any airmen living in the affected housing shouldn&#8217;t be concerned about any security issues involved with living off-post, he said.

Public affairs will release information about the project this week, according to Murphy, and the housing office will be sending out letters about the gate change and lease arrangements.

The wing also will offer a town hall meeting for residents to ask questions about the changes in the future, according to Murphy.

The Air Force intended to place the entry gate and boundary fence along the project&#8217;s current lines, but 9/11 altered those plans, Murphy said.

The facility at the existing Gate 2 checkpoint cost the Air Force nearly $700,000 when it was built in 2002, Murphy said.