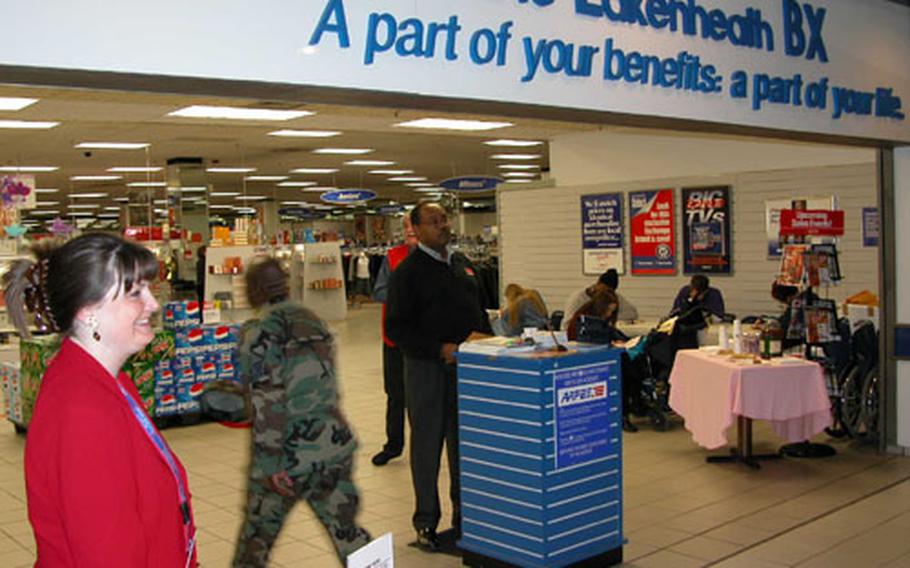 The Lakenheath Base Exchange will close Sunday for renovation. The store is being moved to a temporary site seven miles away at RAF Feltwell, England. (Charlie Coon / S&S)

RAF Lakenheath, England &#8212; Lakenheath shoppers will have to travel seven miles to RAF Feltwell to use a base exchange when the one on their base closes Nov. 9, base officials said Wednesday night.

The temporary closing of the exchange is part of a yearlong renovation plan.

At a town hall meeting, Brig. Gen. Mark T. Matthews said he has asked for a shuttle service to transport Lakenheath residents to the temporary shopping center at Feltwell.

School-lunch coupons, gas coupons, postage stamps and other necessities normally sold at the Lakenheath exchange will be made available at base shoppettes, base officials said.

The Lakenheath exchange will close at 6 p.m. Nov. 9. The merchandise will be moved to a hangar at Feltwell, where a temporary exchange will open Nov. 13.

The new store will be at Building 72, Hangar 3, next to the AAFES furniture store. The 35,000-square-foot hangar is about the same size as the store at Lakenheath. About $9 million in merchandise will fill the hanger, according to Mike Deerhake, the store manager.

Vendors at the Lakenheath exchange will also move their shops to Feltwell.

In the meantime, there will be changes made to services available at Lakenheath. The shoppettes will be stocked with some items previously sold at the BX.

The remodeled base exchange at Lakenheath is scheduled to reopen in about a year, Deerhake said.

Lt. Col. Joe Ward, deputy commander of the 48th Mission Support Group, said adjustments are being made at Feltwell to accommodate an increase in traffic.