Lakenheath doc urges SAD sufferers to step into the light 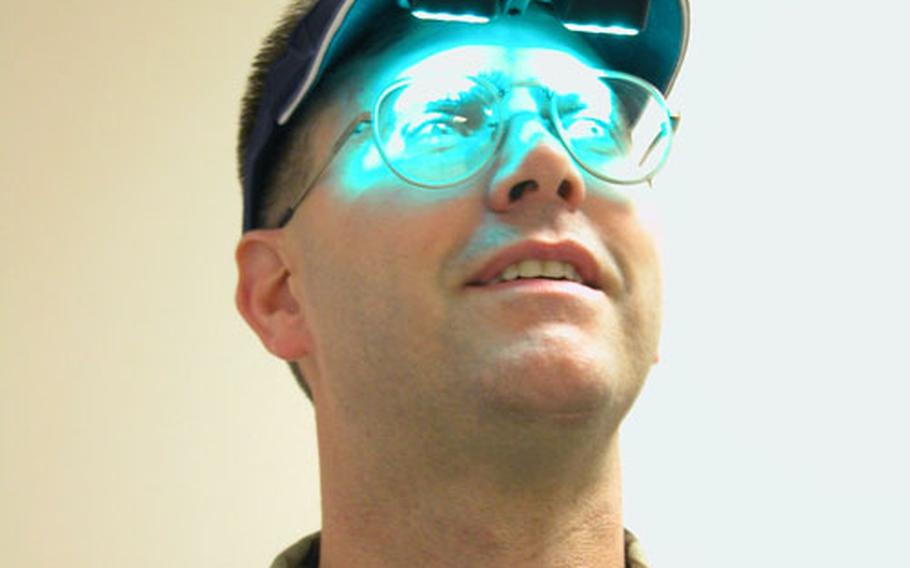 RAF LAKENHEATH, England &#8212; She was an otherwise fit and healthy woman when she walked into Maj. William Brim&#8217;s office at the Life Skills Clinic.

But in recent months, as the sun slipped away and winter crept in, something changed inside the 24-year-old airman&#8217;s spouse. She was depressed and lethargic. She had to leave her job and could barely muster the energy for even the most mundane of tasks. Her marriage and sex life were suffering.

The woman was deemed a victim of Seasonal Affective Disorder, a drastic and sometimes debilitating condition brought on by the winter months and subsequent lack of sunlight.

Symptoms can include lethargy, loss of libido, depression and an overall lack of motivation to do anything, Brim said.

While the numbers of those afflicted and causes are not fully known, Brim said it is believed that melatonin, a sleep-related hormone secreted by the brain, may be a culprit.

More melatonin is produced when there is less sunlight and the days are shorter and grayer, he said.

Other factors such as a genetic predisposition to the disorder also may have to do with who is affected, he said.

Discovered in 1845, the disorder was not named until the 1980s, according to the National Mental Health Association.

Brim said Lakenheath gets anywhere from 25 to 50 SAD patients over a winter.

When a winter funk persists for more than a couple weeks, and basic activities become arduous, SAD could be the culprit, Brim said.

SAD symptoms clear up once spring comes and the sun starts to shine, Brim said.

While skeptics may look at SAD as nothing more than a fancy name for the winter blues that was conjured up in a western world where every tiny malady is over-hyped, Brim said the disorder was first noted in animals, having to do with their reproduction and hibernation patterns.

&#8220;There is no doubt that there are differences in animals and people when the light varies,&#8221; he said. &#8220;We have a culture that seeks out care for these types of things, whereas in far northeast Russia, they might just tough it out.&#8221;

For those with diagnosed SAD, the silver lining to all those cloudy days is that a cure is pretty easy to come by.

Going outside, even under a gray sky, will give someone more exposure to the kind of light their body needs to combat the disorder, Brim said. He recommended walking outside for 30 minutes in the morning after the sun comes up. Even sitting and reading the paper outside helps, he said.

Other treatments involve phototherapy, which involves sessions of special lights that can chase away the symptoms, he said.

One option employed at Lakenheath involves miniature green lights that can be attached to the brim of a hat. The soft green therapeutic glow can be taken anywhere.

Some patients report an instant change in how they feel after the light treatment, while others take a bit longer, Brim said.

After going through the phototherapy for a few weeks, the 24-year-old airman&#8217;s spouse who had been so crippled by the disorder was her old self again, Brim said.

A sometimes severely debilitating condition brought on by lack of sunlight in the winter months. Symptoms can include lethargy, depression, overeating, anxiety and drastic mood changes. Diagnosis is usually made after someone has exhibited the symptoms for a few winters in a row, but some treatments can be employed the first time the disorder is diagnosed.

While it is not completely known what causes the disorder, signs point to an increase in production of the sleep-related hormone melatonin during winter months when there is less sunlight. Some sufferers may also have a genetic predisposition to the disorder.

Making sure to get outside more, even when it&#8217;s cloudy, will give the body more of the light it needs to combat the disorder. Thirty minutes of walking in the morning can help. Many clinics have phototherapy programs that involve artificial light sources. Antidepressants can also be prescribed for more stubborn cases.