Lakenheath debuts center that offers plenty for the community 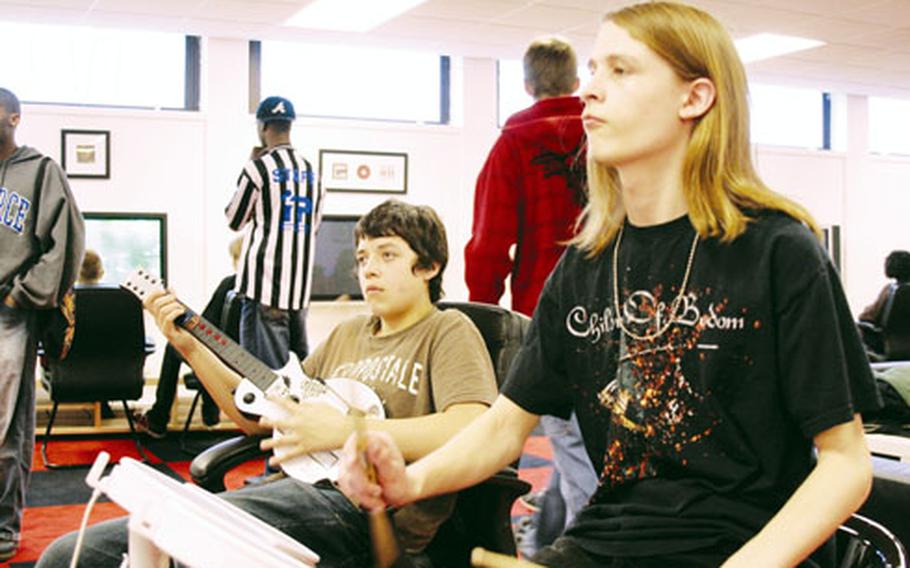 Buy Photo
Jade Nixon, 16, a student at Lakenheath High School, shoots pool with friends after school at the newly opened Page Community Center at RAF Lakenheath. The site is the base’s hub for teen programs. (Photos by Charlie Reed/ Stars and Stripes) Molly Huston and her daughters Olivia, 6 months, and Lily, 3, come to the newly opened center at least three times a week, she said. Huston, who is on terminal leave with the Air Force, said the family-friendly workout room is invaluable. ()

RAF LAKENHEATH &#8212; Come one, come all. The new Page Community Center is open for business.

Whether you&#8217;re a single airman or a family of four, the 16,000-square-foot site has something for everyone, including game rooms, a parent-child exercise area and roller-skating rink. Private-party bookings will be available starting in April.

From the Xbox 360 to the PlayStation 3, the Page Community Center boasts every gaming console under the sun and games galore, said Christa Long, center director.

Meanwhile, parents with small children can get in a workout at the center, thanks to the AmaZone. The mini-gym includes six cardio machines, TVs, weight equipment and a secure playpen that parents can keep an eye on as they exercise.

"It&#8217;s great for parents who might not have an opportunity to hit the gym. They can work out with their child in the room," Long said. "They just love it. They&#8217;re beating down our door at 9 a.m. when we open."

Those looking for less-regimented exercise can hit the skating rink, the only activity that is not free at the center. Skating is $8 ($5 if you bring your own skates) and families of four can get their skate on for $15 on Saturday afternoons.

Teen programs and youth sports are now run from the Page Center, making it "a great central location for anything kid-wise," Long said.

More programs for single airmen such as pool and video game tournaments are being developed, she said.

"And we have a great facility for being able show movies," Long said. "The sky&#8217;s pretty much the limit for what we can do here."