Lakenheath High School freshman Joseph Hartman, left, and Dave Nutt, natural resources manager for RAF Mildenhall, place sod on top of a construction rubble being made into a habitat for great crested newts. Hartman spearheaded the project; it is part of what he must do to earn an Eagle Scout badge. (Sean Kimmons / S&S)

Lakenheath High School freshman Joseph Hartman, left, and Dave Nutt, natural resources manager for RAF Mildenhall, place sod on top of a construction rubble being made into a habitat for great crested newts. Hartman spearheaded the project; it is part of what he must do to earn an Eagle Scout badge. (Sean Kimmons / S&S) 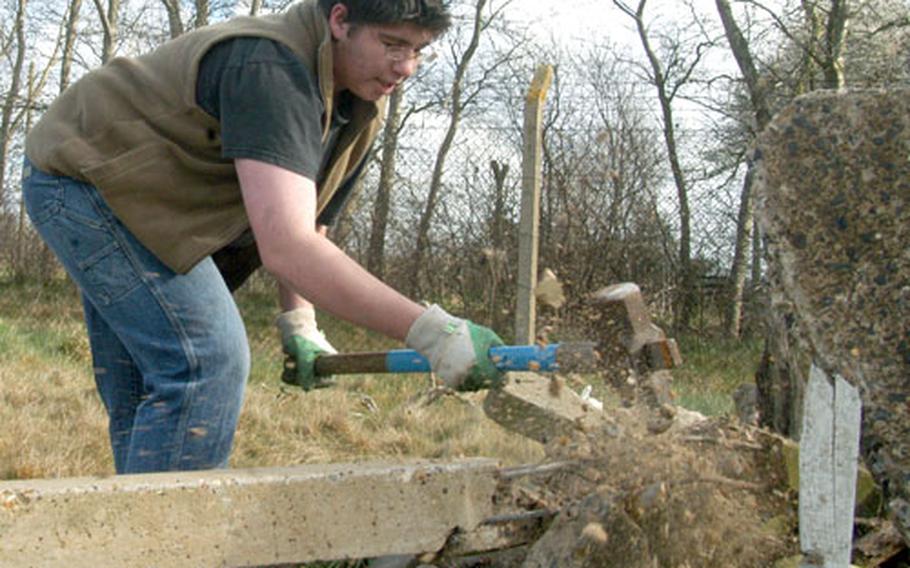 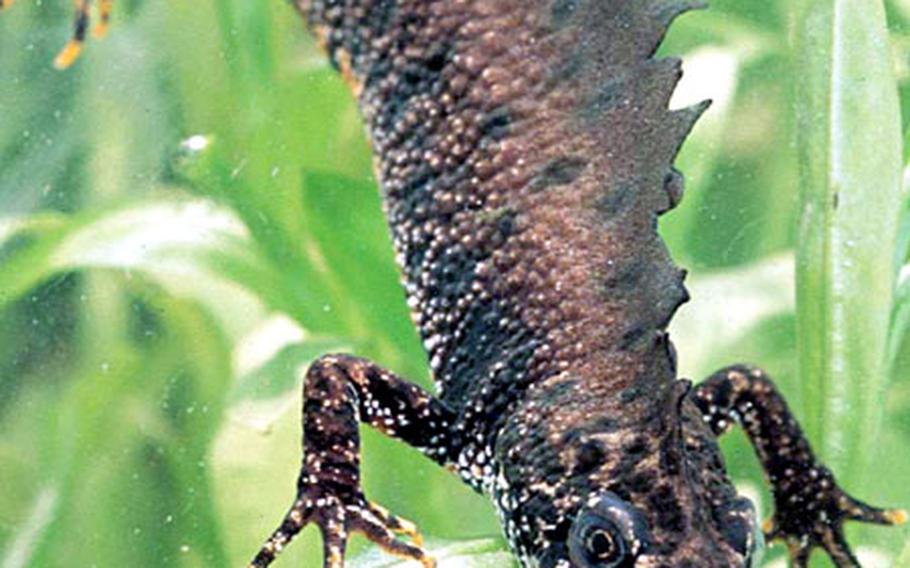 A close-up of a great crested newt. (Photo courtesy of the Froglife Conservation Agency)

RAF MILDENHALL &#8212; Lakenheath High School freshman Joseph Hartman leaned over a brick wall and pointed out a camouflaged amphibian lurking in a pool of rainwater at an old training site near Beck Row.

After spending much of his life in the Boy Scouts, 15-year-old Hartman is now trying to earn the top rank of Eagle Scout. To achieve it, he must first spearhead a community service project.

He chose the great crested newts &#8212; who are close to becoming an endangered species &#8212; as his beneficiaries.

On April 10, Hartman and fellow Boy Scouts from Troop 219 transformed a pile of construction rubble into a 3-foot-tall, sod-covered habitat next to the pool. The mound will serve as a lucrative hibernation site for the great crested newt, the largest newt species in the United Kingdom.

Hartman admitted he got the five-star remark from Dave Nutt, natural resources manager for RAF Mildenhall, who also helped with the project.

&#8220;The newts are the most protected [amphibian] species in the U.K.,&#8221; Nutt said, adding that special permission is needed to enter their environment.

Strict protection laws were passed after the newt&#8217;s numbers fell sharply due to modern farming practices and the destruction of ponds across the United Kingdom, Nutt said.

It is hoped that the construction of this man-made habitat will deter their extinction at this site.

Although total population numbers for the great crested newt are lacking, Nutt said a survey conducted last August by English Nature found about 60 at this area.

The conservation agency will perform another count this August to compare the numbers.

Nick Sibbett, the Suffolk area conservation manager for English Nature, said he has been pleased with the preservation work being done by the Air Force and is optimistic about the newt&#8217;s future.

He also praised RAF Lakenheath&#8217;s protection of endangered plants and grasslands surrounding its runway. &#8220;They do a very good job for their survival,&#8221; he said.

Great crested newts often occupy ponds (their breeding habitat) from spring to autumn. They prefer ponds with a range of water plants and without fish or a lot of waterfowl.

Great crested newts are larger (around 6 inches) than smooth newts (around 4 inches). Males of both species have a crest in the spring and summer.

In Britain, it is an offense to kill, injure, disturb or capture a great crested newt or to damage, destroy or obstruct places (including ponds) where they rest or breed.