Members of the unit pull a shell filled with concrete during a recent exercise. (Bryan Mitchell / S&S) 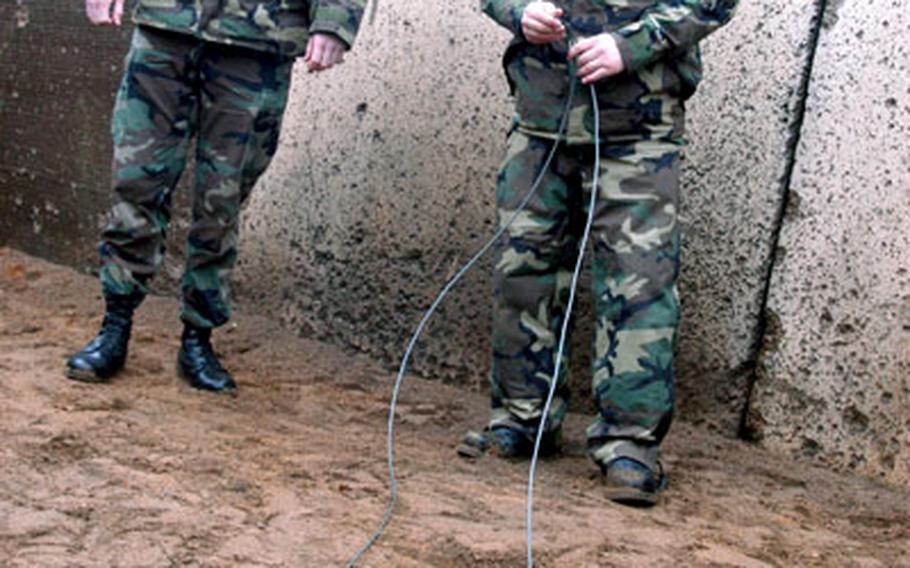 During a recent deployment to Iraq, the 23-year-old airman&#8217;s mission to search out and destroy roadside bombs was interrupted when one of the deadly devices detonated under his vehicle.

&#8220;It sort of found us,&#8221; Parker explained during a recent trip to the explosive ordnance disposal range at Feltwell.

He wasn&#8217;t seriously hurt in the explosion and continued working in Iraq.

Clad in winter hats and gloves, the troops shivered against the slate gray East Anglian sky and waited for a thunderous boom to affirm the explosive&#8217;s detonation.

The EOD unit doesn&#8217;t garner much attention against the more glamorous F-15 fighter jets that also call RAF Lakenheath home. The emergence of roadside bombs in Iraq and Afghanistan, however, has boosted the importance of a unit specializing in disarming weapons designed to destroy.

The flight is responsible for explosive ordnance duties for eight bases, which includes all of the United Kingdom and Iceland and Portugal, as well as military needs in Scandinavia. The unit regularly deploys airmen downrange and is sometimes called upon to assist the U.S. Secret Service and the U.S. State Department.

&#8220;The least understood part of our mission is VIP support,&#8221; Senior Airmen Louis Coduti wrote in an e-mail to Stars and Stripes. &#8220;We do a lot of missions in support of the U.S. Secret Service all over the world for various VIPs.&#8221;

The flight&#8217;s work was recognized last year when the unit was awarded the Air Force Association Citation of Honor. The award stated the unit won by &#8220;exceeding standard performance by supporting combat theater commanders and U.S. Secret Service across the globe.&#8221;

For Parker and his comrades, preparing to destroy weapons caches and disarm bombs downrange translates into a steady course of training both at the unit&#8217;s RAF Lakenheath facility and out on the range at RAF Feltwell.

&#8220;We spend most of our week in training,&#8221; unit commander Capt. Robert Berish wrote in an e-mail to Stars and Stripes. &#8220;We have classroom instruction almost daily. We conduct practical hands-on training and scenario training monthly.&#8221;

Coduti, 25, joined Parker on the recent deployment to Balad, Iraq.

During the trip to the explosive range at Feltwell, he rigged military dynamite for a test explosion. The airmen also trained with C-4-based shape charges. They blew holes in 2-inch sheets of steel and used a wine bottle to test the explosion&#8217;s depth capability.

The airmen said an average day in Iraq would include five calls to check on items suspected of being explosives. The airmen &#8220;render safe&#8221; explosives based on the specific threat. Some bombs must be defused, others detonated.

The skills they hone in the United Kingdom are crucial to saving lives in Iraq and beyond. Coduti said the troops have a solid foundation of knowledge of explosives, but often have to improvise to figure out the best way to defuse dangerous bombs.

Steady training on the base is key, but the fine nuances inherent in dealing with explosives demand the troops have time to simply blow stuff up.

&#8220;A day on the range provides the hands-on experience with live explosives that you need,&#8221; Coduti wrote.

The 48th Civil Engineer Squadron&#8217;s Explosive Ordnance Disposal Flight last year was awarded the Air Force Association Citation of Honor for its work in 2004. During the year, the unit: