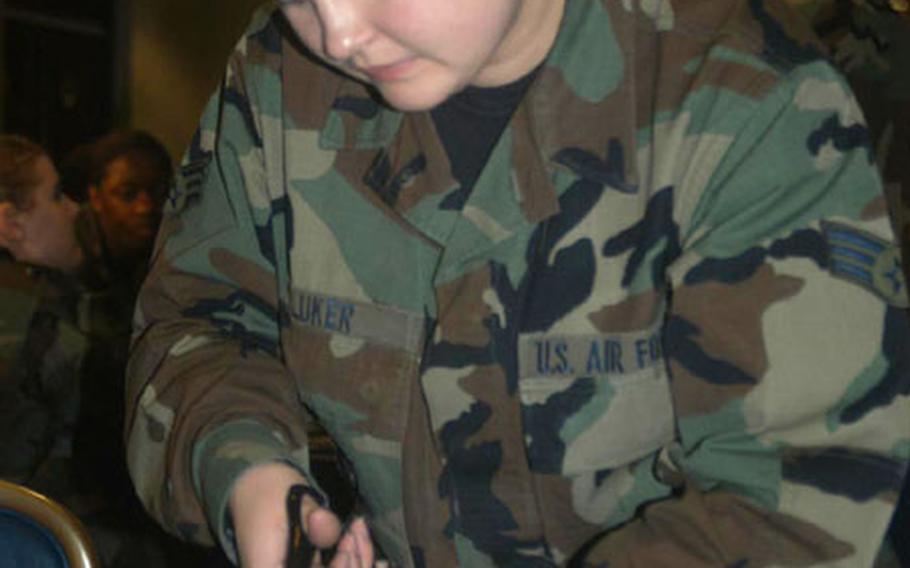 Senior Airman Sheila Luker of RAF Lakenheath, England, cuts old battle dress uniforms into panels, which will be sewn together to make blankets for the poor and homeless in England. Luker volunteered to help out with the program created by Senior Airman Dennis Fry of RAF Lakenheath. (Ron Jensen / S&S)

Senior Airman Sheila Luker of RAF Lakenheath, England, cuts old battle dress uniforms into panels, which will be sewn together to make blankets for the poor and homeless in England. Luker volunteered to help out with the program created by Senior Airman Dennis Fry of RAF Lakenheath. (Ron Jensen / S&S) 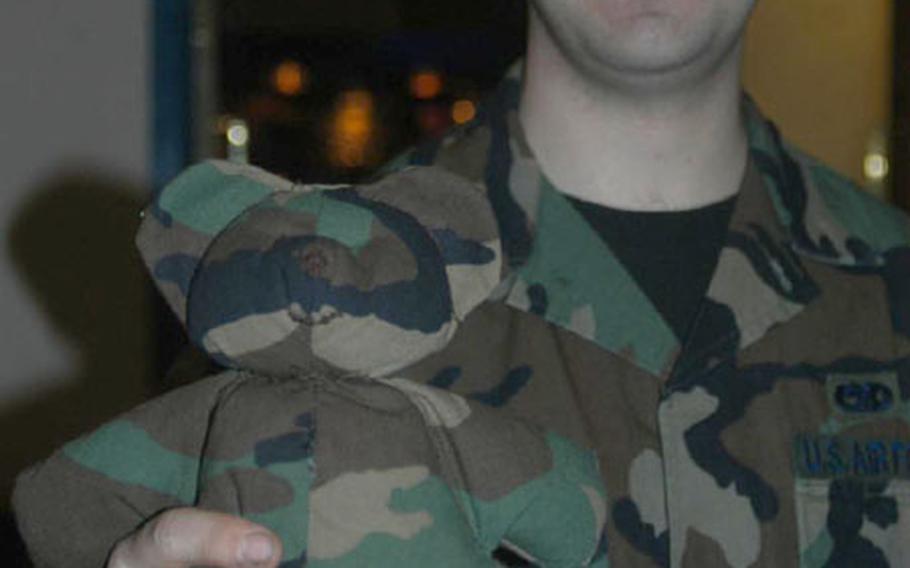 Senior Airman Dennis Fry of RAF Lakenheath, England, holds a teddy bear he fashioned from used BDUs. He plans to have more bears and blankets made from old uniforms and provided to the Salvation Army in Norwich, England. (Ron Jensen / S&S)

So homeless people in England soon will be receiving blankets to keep them warm.

The connection is not as disconnected as it might seem.

When Fry, a member of the propulsion flight of the 48th Component Maintenance Squadron at RAF Lakenheath went to the Airman&#8217;s Attic, the base&#8217;s giveaway store, to find a new microwave, he saw boxes and boxes of worn and torn BDUs.

&#8220;I mulled it over for a while,&#8221; he said, and then decided the uniforms could be cut up and sewn into blankets that could be given to the Salvation Army.

On Thursday, a couple of dozen airmen from the base gathered at the enlisted club to cut stacks of uniforms into patches. Fry has secured the services of a couple of seamstresses &#8212; and hopes to find more &#8212; to do the sewing. He said the finished blankets would be given soon, although he&#8217;s not sure exactly when, to the Salvation Army in Norwich.

She said the blankets would be passed out when the organization makes its nightly soup run through Norwich and Ipswich to provide homeless people with a hot meal.

Fry, 27, a three-year Air Force member, said a blanket made from old furniture fabric samples in 1977 by his sister prompted the idea. Why not, he wondered, do the same with old uniforms?

He enlisted the aid of the Air Force Sergeants Association on the base to spread the word. Uniforms were collected and the cut-up took place while pizza was munched at the enlisted club.

&#8220;This is all word of mouth,&#8221; Fry said as he motioned toward the 25 people snipping away. He said more such events will be held as more uniforms come in.

Senior Master Sgt. Bryan Allen of the 48th Medical Support Squadron was one of those wielding scissors.

That sentiment is shared by Senior Airman Sheila Luker, of the 48th Mission Support Squadron.

Fry is also making use of the scraps left over from the blankets to make teddy bears, which will be stuffed with more uniform scraps.

Fry, who is from Cookville, Tenn., said his involvement will end when the blankets and bears are handed over to the Salvation Army. But, he said, that won&#8217;t end his satisfaction with the effort.