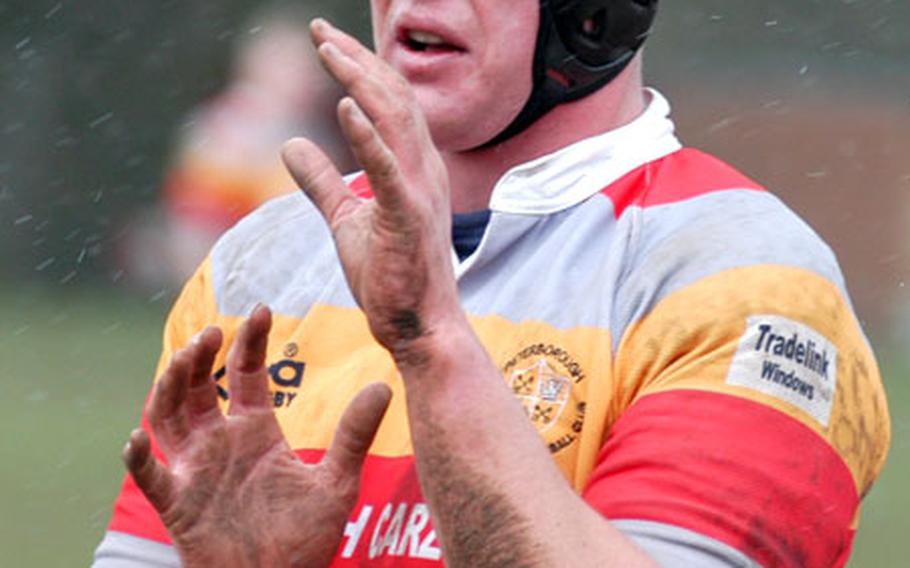 Wearing headgear to protect his ears during scrums, Staff Sgt. Alf Thompson holds up his muddy arms as he prepares for a lineout play in a rugby match. Thompson, an RAF Lakenheath airman, plays for the Peterborough Rugby Club. (Sean Kimmons / S&S)

Wearing headgear to protect his ears during scrums, Staff Sgt. Alf Thompson holds up his muddy arms as he prepares for a lineout play in a rugby match. Thompson, an RAF Lakenheath airman, plays for the Peterborough Rugby Club. (Sean Kimmons / S&S) 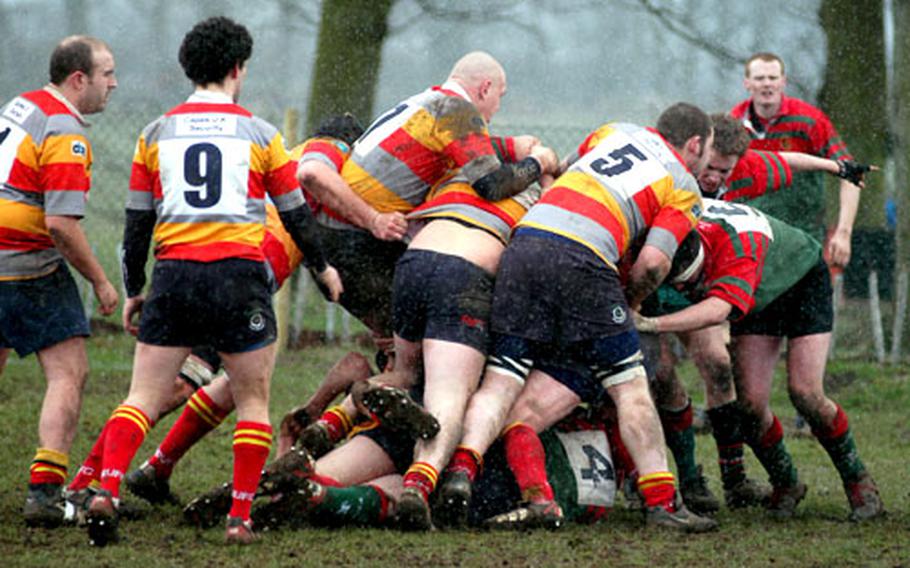 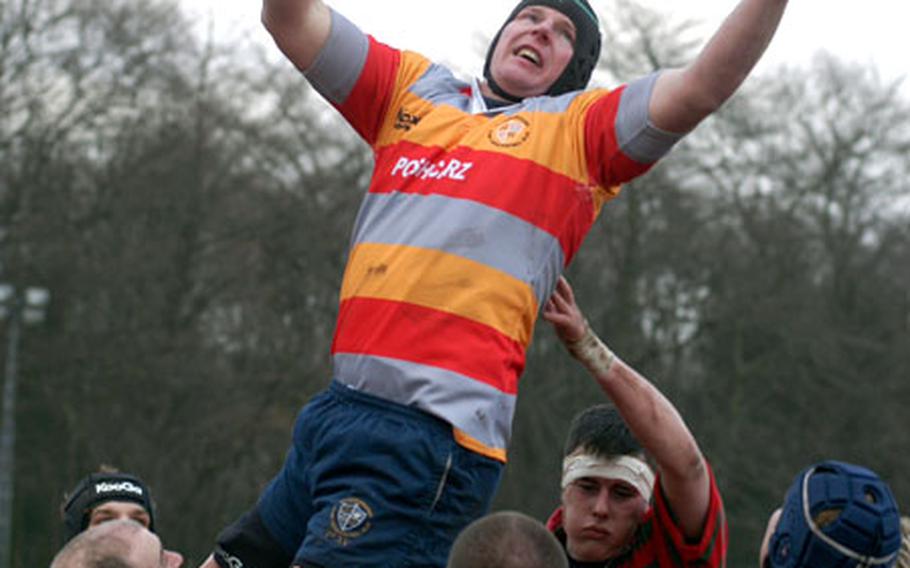 During a lineout play, Staff Sgt. Alf Thompson is lifted up into the air to catch a throw from out of bounds. (Sean Kimmons / S&S)

ARNOLD &#8212; With bodies stained in mud and blood, adrenaline-fueled men clash on an open field surrounded by the famed Sherwood Forest.

This isn&#8217;t a fight between Robin Hood&#8217;s merry men and their foes, but a hard-hitting rugby match between the Paviors and Peterborough Rugby Clubs.

Towering at 6 feet 5 inches and 245 pounds, Thompson&#8217;s frame fills Peterborough&#8217;s second-row position, where he battles opponents in scrums and lineout plays. This is the third Peterborough season for Thompson, who was selected to the Air Force Rugby team last month.

Missing the smash-mouth action of American football, Thompson began playing rugby while stationed in Germany six years ago. He eventually became a member of the U.S. Forces Europe Rugby team.

Since then, he has been improving his rugby skills by learning from teammates and competitors in England.

&#8220;When I came out of Germany, I wanted to start playing at a higher level and get more experience,&#8221; Thompson said of why he joined the Peterborough squad, currently five divisions below Premiership status.

Other than experience, the 30-year-old from Iola, Wis., said he enjoys the camaraderie of the rugby lifestyle.

For those interested in joining a rugby club, Thompson ensures them that &#8212; no matter their skill level &#8212; they can train up at numerous rugby clubs throughout the country.

After all, Thompson said, American football is derived from rugby.

Also, he said, the U.S. is the current Olympic champion in rugby. Of course, the last time the sport was played in the Olympics was back in 1924.

With Peterborough down at halftime to the Paviors, Thompson substituted in to change the momentum of the game. Using his size, he gave Peterborough an advantage in the scrum formations, and helped his team come back to beat the Paviors, 18-15.

When the match ended, so did the intensity of the players as they congratulated each other. One of the rugby players in the crowd then yelled, &#8220;Now, let&#8217;s get drunk!&#8221;