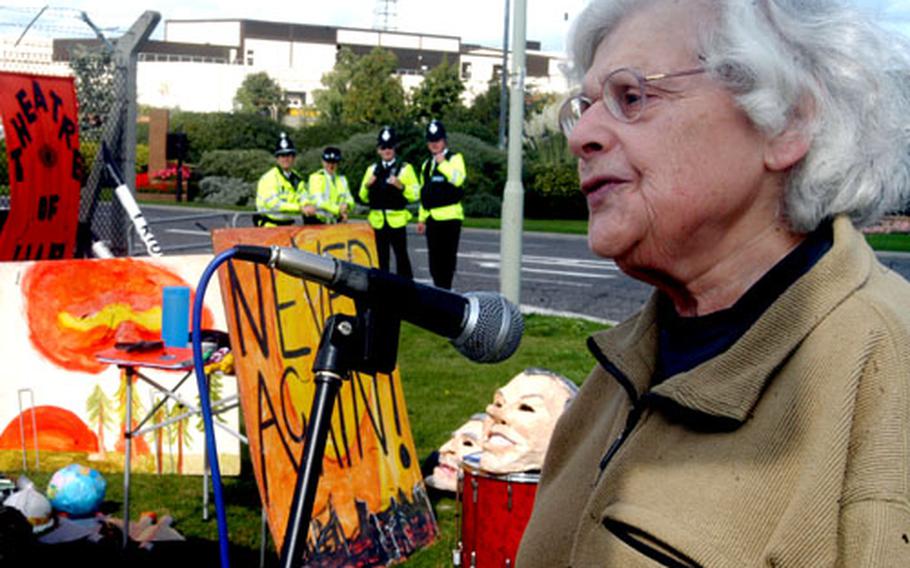 Davida Higgin, 78, the organizer of the anti-nuclear Lakenheath Action Group, reads a letter Sunday to the 48th Fighter Wing commander during a demonstration outside RAF Lakenheath, England. (Ron Jensen / S&S)

As part of regularly recurring protests Sunday, a letter addressed to Air Force Brig. Gen. Robert P. Steel was handed to a Ministry of Defense police official at the base&#8217;s main gate by Davida Higgin, who signed the letter.

The Lakenheath Action Group, which Higgin organized, has long believed the base houses nuclear weapons. The group&#8217;s position gained credence earlier this year when the Washington-based Natural Resources Defense Council, an environmental group, reported 110 nukes are stored at the base, part of America&#8217;s arsenal in Europe of 480 weapons.

The group used declassified documents, military publications and other sources for its report.

Capt. Beth Horine, public affairs chief at the base, said she could neither confirm nor deny the presence of nuclear weapons at the base.

About 50 demonstrators gathered outside the base Sunday. Poems were read, speeches made and songs sung. A group known as Theatre of War presented a satirical play about America&#8217;s military presence in the U.K. and its plans for &#8220;world domination.&#8221;

Horine said the base is comfortable with the regular demonstrations held by Higgin and her group.

Higgin, 78, an American who has lived in England since 1949, and many of her colleagues predate the nuclear age. They have been protesting for decades and many have been arrested for their efforts.

John West, 78, began his activist life in 1956 when police roughed up protestors who had gathered to pray.

Higgin is confident the weapons will eventually be removed.

The Belgian parliament wants America&#8217;s nukes removed from Europe, she said. And the Russian government has said it will discuss reducing its nuclear stockpile only when America takes its weapons from Europe.