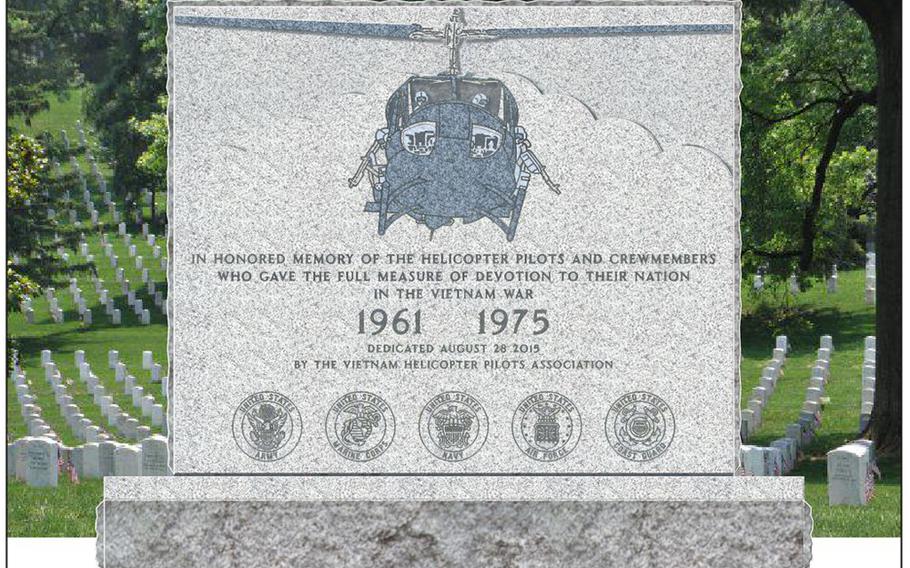 WASHINGTON — An effort to establish a memorial at Arlington National Cemetery for helicopter pilots and crewmembers killed in the Vietnam War could be thwarted because of diminishing burial space.

“I think we have an uphill battle,” said Bob Hesselbein, president the Vietnam Helicopter Pilots Association. “We’re fighting to get just a small memorial, and it’s been a struggle.”

The VHPA first proposed a national memorial in early 2014 dedicated to the nearly 5,000 pilots and crewmembers who were killed during the Vietnam War, about 450 of whom were interred in Arlington.

But a cemetery advisory committee and former Secretary of the Army John McHugh rebuffed the idea. They contested the memorial would take up precious space at Arlington.

“We felt disappointed when the Secretary of the Army said no. We felt it devalued the deaths,” Hesselbein said.

So the VHPA took its fight to Congress.

Rep. Mark Amodei, R-Nev., is sponsoring legislation to order the memorial be allowed in Arlington. The bill was first heard Thursday before the House Armed Services Subcommittee on Military Personnel.

During the hearing, Rep. Joe Heck, R-Nev., the subcommittee’s chairman, said the panel would “take the matter under advisement.”

Arlington inters about 30 veterans, spouses and dignitaries every week day. If the current rate of internment maintains, Arlington will have to cease all burials there in the 2030s, said Patrick Hallinan, the cemetery’s executive director.

Though plans are being discussed for a 38-acre expansion, Hallinan reiterated the space was needed for burial plots.

The cemetery advisory committee recently received five other requests for memorials, Hallinan said. Only two memorials -- the Battle of the Bulge Memorial and the Jewish Chaplain’s Memorial – have been installed since 2002.

The proposed VHPA memorial would stand four feet high and have a base of five square feet. A helicopter and insignias of all branches of the military would be etched on the granite façade. VHPA would pay $5,000 to make and ship the memorial, and the group would leave behind an endowment for future maintenance, said VHPA member John Powell.

“The reality is that space is finite,” Hallinan said. “I understand it’s only five feet, but five feet is a gravesite.”

Amodei questioned whether Congress should alter the memorial request process for Arlington because it “lacks transparency.”

“When only two memorials without associated remains have been installed in Arlington in the last 25 years, I believe that this should be taken as a sign that the process needs to be revised,” he said.