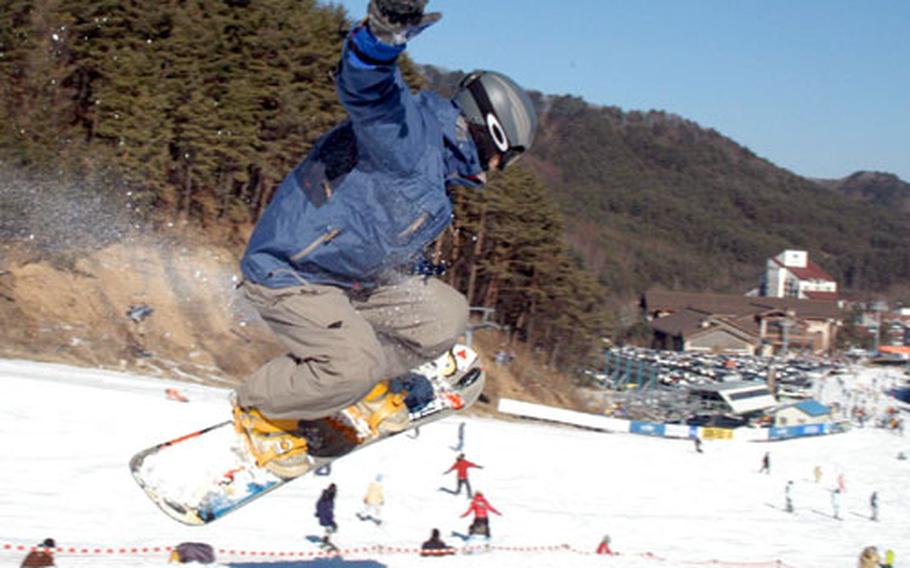 CAMP RED CLOUD, South Korea &#8212; 2nd Infantry Division soldiers have hit the slopes for the start of ski season despite unseasonably warm weather and a shortage of natural snow in South Korea.

Camp Red Cloud-based recreation specialist Pak Ihwan, who already has led one group of 2nd ID soldiers on a trip to Bears Town ski resort this month, said several ski trips would be offered over winter. Pak said he would lead trips to Bears Town in January and February.

Ski trips also are planned by staff at other Area I recreation centers including expeditions to Kangchon Ski Resort near Camp Page and Yong Pyong Ski Resort near Wonju, southeast of Seoul.

Bears Town, the most popular ski destination for soldier skiers in Area I, boasts several chairlifts and numerous restaurants and ski shops. Reaching Bears Town by bus from CRC takes an hour and a half, Pak said.

However, he recommended Phoenix Park, southeast of Seoul, as the country&#8217;s newest and best ski area.

The resort, owned by the Hyundai corporation, includes numerous lifts and facilities such as a large half-pipe for snowboarders.

However, soldiers said when they visited, most of the slopes were closed due to lack of snow. Only two chairlifts at the bottom of the mountain were running and the staff worked hard all day to move around the small amount of man-made snow they had so that the large crowd of South Korean skiers could keep skiing.

Despite their efforts, by early afternoon the warm weather had melted much of the snow; on some slopes, it mingled with mud.

One of the 2nd ID soldiers visiting the resort, Spc. Danial Stutz of the 55th Military Police Company, tried snowboarding for the first time.

One of the biggest challenges, aside from staying upright, was avoiding all the other skiers and snowboarders who packed the slopes, he said.

The South Korean skiers were good company, added Stutz, who said he plans to develop his snowboarding skills later in the season.