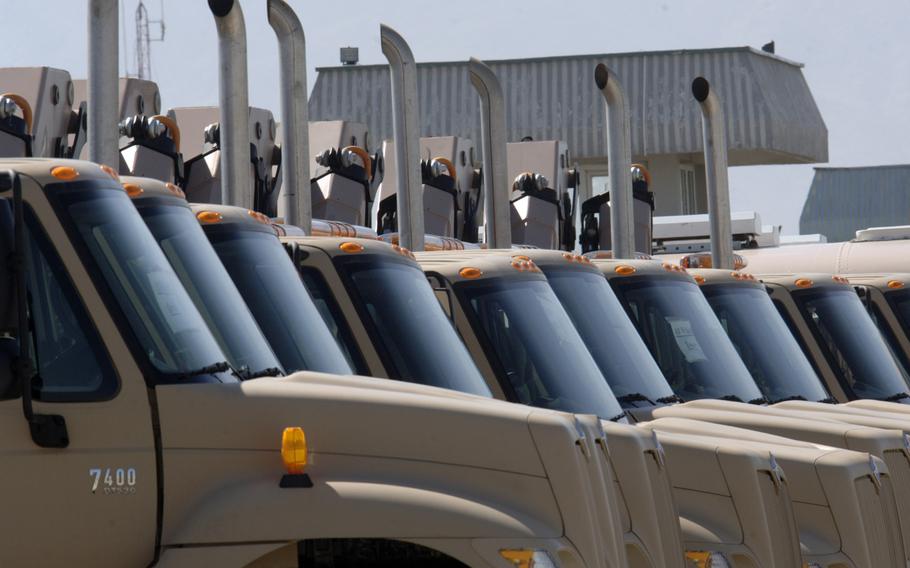 U.S.-bought tactical supply trucks for the Afghanistan National Army at their central supply depot in Kabul. Almost half of the Afghan military's local supply sites do not use the U.S.-supplied CoreIMS software to track Afghan military supplies, because they do not have electricity, internet or expertise to use it properly, a Pentagon report said this week. (U.S. Air Force)

KABUL, Afghanistan — Afghan army weapons and vehicles can’t be properly tracked due to infrastructure problems and lack of qualified staff at many smaller bases, the Defense Department’s watchdog agency said.

The U.S.-supplied CoreIMS software system improved accountability at national warehouses but couldn’t be used at remote depots that lack electricity, internet access and personnel trained to use it properly, a report by the Pentagon’s Inspector General this week said.

Almost half of the Afghan military’s supply sites don’t use the software, which cost $14.4 million to install and run from 2016-2019, the report said. Continued investment in the software could be an “inefficient use” of military resources, it said.

The software records and tracks equipment supplied by the U.S. military. The inability to track supplies at some locations may leave U.S. advisers unable to identify equipment theft or plan for Afghan military needs, the report said.

Advisers with the Combined Security Transition Command-Afghanistan, or CSTC-A, funded an expansion of the CoreIMS software in 2016. Besides the power and training issues, CSTC-A in previous reports identified illiteracy, corruption and lack of interest by senior leaders as obstacles to full implementation.

The system did track about 95% of equipment initially given to the Afghan government between 2016 and 2019, indicating “strong internal controls,” CSTC-A stressed in a response to the report. But that still left equipment worth nearly $45 million unrecorded at that level due to data-entry errors, the report said.

“We believe that these challenges were more difficult than CSTC-A may have originally determined,” the Pentagon’s IG report said.

The CoreIMS system will continue to be used, U.S. officials added in their response. Advisers will conduct site surveys to determine whether CoreIMS can be added to more locations.

Relying on a system that requires internet and power in a country without steady access to both may leave the Afghan military dependent on foreign advisers for logistics, the report said.

“Continuing to train, advise, and assist the ANDSF on the use of CoreIMS may incrementally help with weapon and vehicle accountability in the short term,” the report said, referring to the Afghan National Defense and Security Forces. “But it is not a long-term solution to CoreIMS implementation issues that the ANDSF faces.”